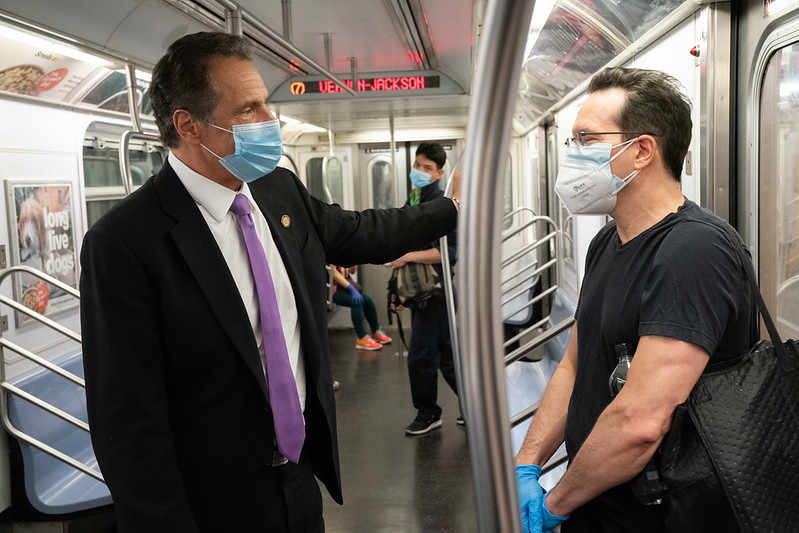 Cuomo takes the subway to start road to recovery

The MTA is cleaning and disinfecting subway cars daily. New York State is deploying over 1 million masks, 35,000 gallons & 500,000 2-oz bottles of sanitizer to the MTA.

“How do you know the subway is going to be safe on reopening day? If it wasn’t safe, I wouldn’t ask anyone to go on the subway.,” said the Governor.

“And for me, it’s very simple. I just assume I’m making the decision for myself and for my children. If the subway isn’t safe for me, then I wouldn’t ask anyone else to go on the subway. Today, I took a ride on the 7 Train. The M.T.A has done phenomenal work and I encourage New Yorkers to practice proper safety as they return to the subways during New York’s reopening.”

The new busways and dedicated bus lanes will increase bus speeds and reliability along major corridors in all five boroughs and address concerns over the growth in vehicular traffic.

After a successful pilot last October, the popular 14th Street busway will be made permanent and bus lanes extended eastward. The City will also add a bus and truck priority treatment along Flushing’s Main Street in Queens, and new bus lanes to serve critical transit connections along 149th Street in the Bronx. The nine projects combined will benefit nearly 750,000 daily riders.

“As New Yorkers head back to work, they’ll be relying on the bus more than ever – and I’m proud to offer them faster and more reliable options,” said Mayor de Blasio. “By replicating the 14th Street success story in other congested corridors, we can reduce traffic, increase mass transit service, and build a fairer and better New York.”

“As New York City emerges from the difficult days of COVID-19, our commitment to faster and more reliable bus service has never been more important, as buses serve a critical role — both in communities hit hard from the pandemic and by essential front-line workers,” said DOT Commissioner Polly Trottenberg.

“We are proud to undertake transformational work on some of the busiest bus corridors in the city, including 149th Street in the Bronx and on 14th Street in Manhattan, where the busway has been such a tremendous success.  We look forward to working with our partners at the MTA to get these transformational changes finished this year.”

Projects beginning this month include:

1)    149th Street, Bronx: DOT will implement offset bus lanes for most of the 2.7-mile corridor from Southern Boulevard to River Avenue. 149th Street carries four bus routes with a total of 55,000 daily riders, and serves as a vital connection to 10 subway lines, the HUB, and Lincoln Medical Center.

2)    The 14th Street Busway, Manhattan: The 14th Street Busway pilot has received international attention, as it has successfully increased bus speeds by as much as 24% and ridership by as much as 30%. The City will make this pilot project permanent. The project, which serves approximately 28,000 daily riders of the M14, combines blocks of exclusive access and standard bus lanes to provide bus priority from 9th Avenue to 1st Avenue. DOT will add 0.8 miles of new bus lane from 1st Avenue to Avenue C.

3)    Main Street, Flushing: DOT will add a busway to a .3-mile northbound stretch of Main Street, where it meets the terminus of the 7 train. The street currently features bus and truck priority treatments in the southbound direction that have resulted in a 23% increase in bus speeds between 2017 and 2018. The enhancement will run along Main Street and Kissena Boulevard as it connects to Main Street and will continue to Northern Boulevard. Bus routes that travel along Main Street carry about 150,000 rides per day.

DOT, in collaboration with MTA, also announced that it will implement bus priority improvements on seven additional corridors in 2020, including bus lane or busway treatments at the following locations: