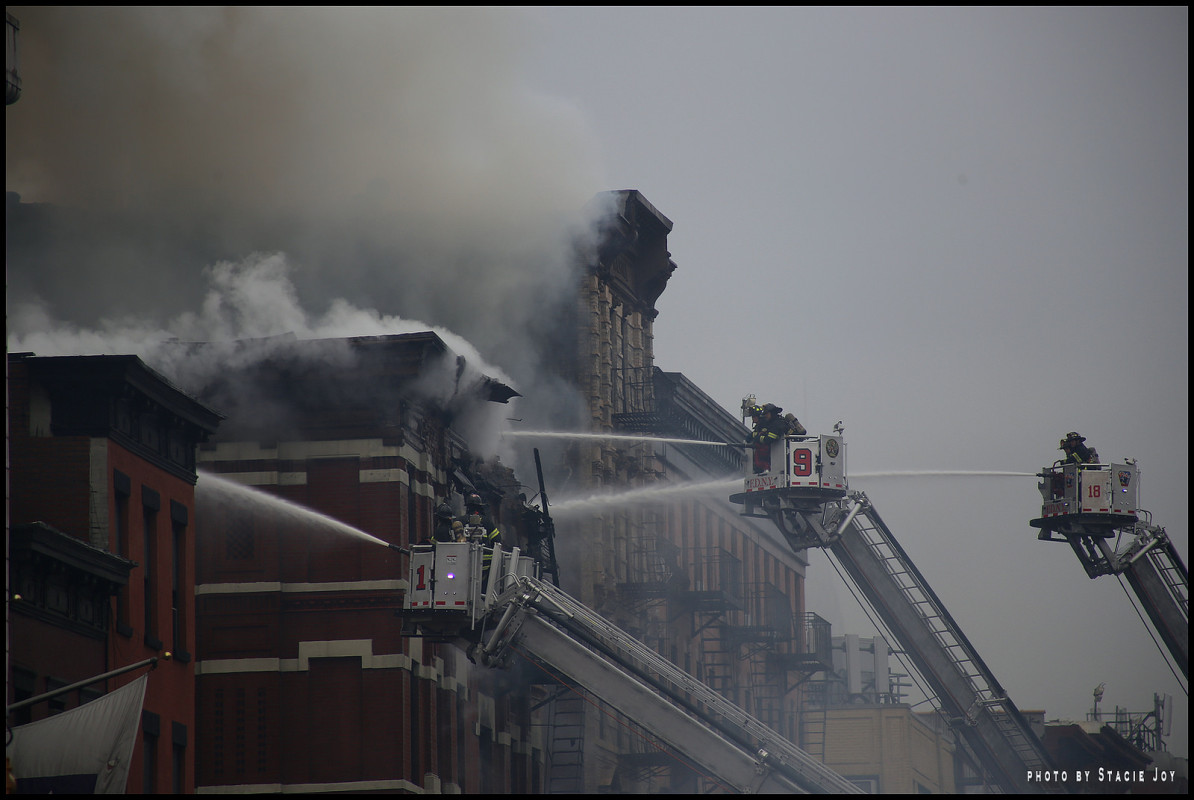 Five people have been arrested in connection with a fatal gas explosion in an East Village building last March. In a press conference on Thursday morning, officials led by Manhattan District Attorney Cyrus Vance, Jr. and Police Commissioner William Bratton announced charges against landlord Maria Hrynenko, her son Michael Hrynenko and contractors Athanasios Ioannidis, Dilber Kukic and Andrew Trombettas. The suspects were charged with manslaughter in the second degree, criminally negligent homicide and offering a false instrument for filing in the first degree.

Court documents depict a web of neglectful acts that led to the deadly incident. According to the indictment, the elder Hrynenko hired Kukic in 2013 as a general contractor to renovate several of her properties, including the five-story building on 121 Second Avenue. Kukic then hired Ioannidis, who did not have a professional license, who in turn paid Trombettas to improperly file paperwork with the Department of Buildings and Con Edison in his behalf. Trombettas, who has a master plumbing license, was said to have rented out his credentials to Ioannidis and others.

According to DOI Commissioner Mark Peters, Kukic was also arrested as part of a DOI investigation a month before the explosion. Kukic was said to have paid $600 in bribes to dismiss violations in two properties he owned.

“The seven-alarm fire that killed two people and engulfed three buildings in March 2015 was caused by a foreseeable, preventable, and completely avoidable gas explosion,” said Vance. “Development, construction, and renovation is happening across the City at breakneck speed. In this market, the temptation for property owners, contractors, and managers to take dangerous—and, in some instances, deadly—shortcuts has never been greater. As alleged in the indictment, the defendants created a deadly inferno fueled by an illegal gas delivery system installed at 121 Second Avenue, leading to the loss of two young lives, and leaving more than a dozen others with serious, permanent injuries.”

According to the indictment, the elder Hrynenko entered into lease agreements with tenants in 2014, in spite of not having approval from Con Edison for installing gas meters in the building’s apartments. To provide heat to the apartments, Hrynenko told Ioannidis to divert heat from Sushi Park’s gas supply. Upon inspection, Con Edison and the FDNY deemed the set-up to be unsafe and cut off the gas supply to both Sushi Park and the building’s residential tenants. However, instead of following Con Edison’s directive, the suspects made another illegal connection to a commercial grade gas meter in the adjacent property, 119 Second Avenue, which the Hrynenkos also owned. The system was hidden behind a locked door in 121 Second Avenue’s basement. In August 2014, Ioannidis used Trombettas’ license to send an affidavit to ConEd saying that a pressure test on Sushi Park’s gas meter was performed successfully. Later that month, ConEd restored gas supply to the restaurant, with the heat again being rerouted to residential tenants.

At the day of the explosion, two Con Edison employees performed an inspection at 121 Second Avenue. Prior to their arrival, Kukic and Ioannidis manipulated the gas delivery system, turning off the gas supply coming from 119 to 121 Second Avenue. The building failed the inspection. After the Con Edison employees left, Kukic and Michael Hrynenko turned on the gas supply again. However, since the shut-off valves remained open, gas flowed into the restaurant. At 3pm that day, a Sushi Park employee smelled gas and notified the building owner. Surveillance footage showed Kukic and the younger Hrynenko entering the restaurant’s basement then quickly running to the basement without warning people inside the restaurant. The pair sustained burns to their faces.

“Last March, we saw that when the callous choice is made to put money before common sense and safety, innocent people lose their lives. The defendants’ actions displayed a total disregard for the laws and rules in place to protect all New Yorkers—both residents and first responders,” said FDNY Commissioner Daniel A. Nigro.

The incident produced two fatalities: Moises Colon, a Sushi Park employee, and Nicholas Figueroa, who was paying his bill at the restaurant after a date with a co-worker. The blast also injured two dozen people and led to the collapse of adjacent properties 119 and 123 Second Avenue.