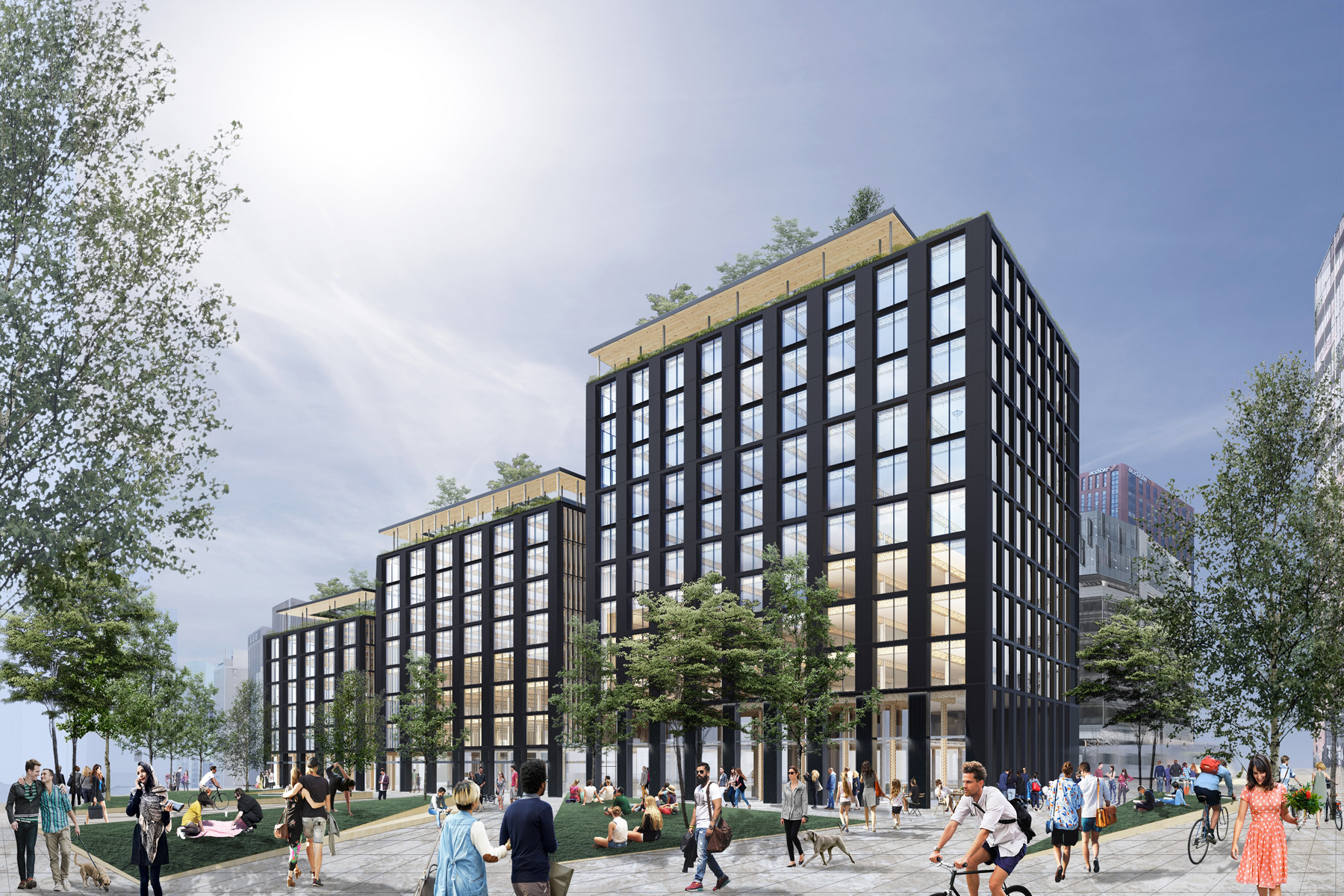 As costs and concerns tied to cement and steel construction continue to rise, some regulators, builders and environmentalists are taking a fresh look at an old material.

Timber high-rises have been drawn up and executed around the world, from far-flung locales such as London, Paris and Vancouver to nearby Newark. Proponents praise these projects as healthier options for the planet at large as well as individual occupants.

With its history of horrific blazes, New York has not jumped on the wooden bandwagon. Citywide, timber buildings can’t be more than six stories tall and there are additional restrictions in the designated fire district, which includes all of Manhattan, Brooklyn and the Bronx as well as parts of Queens and Staten Island.

Manhattan’s building code helped put the kibosh on a 10-story timber condo proposal last year and, in other markets, wood-based projects have stalled or fallen by the wayside due to zoning restrictions and financial constraints.

However, an ongoing review of the International Building Code policy on timber construction could pave the way for changes in New York and other lumber-leery metropolises.

Technological advancements such as cross lamination—a process by which many layers of wood are pressed and glued together—have increased the strength and fire resistance of timber beams, which can now rival steel in both respects.

Designers and developers are pining for mass timber because it can be assembled faster than heavier material and some portions can be built offsite, reducing construction manhours. Wood also has a net positive impact on emissions while producing industrial-strength steel and Portland cement generates large quantities of greenhouse gases.

In light of these trends, the International Code Council, which sets the International Building Code guidelines, has assembled an ad hoc commission to reevaluate its stance on wood. The Tall Wood Buildings committee has verified the fire safety of mass timber and is even considering raising the suggested maximum height for such construction from six stories to 20.

The ICC is expected to vote on changes to its Tall Wood code this fall. New York is also evaluating its building code and could have a new timber policy on the books as soon as 2020.

Green said New York and other cities have been reluctant to accept timber construction because of an attachment to fears from a bygone era, when wood structures were vulnerable to flash fires as opposed to today’s materials, which keep flames burning slow and contained.

“You don’t make public policy based on emotion or you shouldn’t, there’s too much of that,” he said. “New York’s challenge is moving from an emotionally-based discussion to a science-based discussion.”

One of Green’s most recent designs is a mass timber office complex in Lotus Equity Group’s Riverfront Square Development in Newark.

Although the company needs the city and state to sign off on more lenient regulations before moving forward, it plans on building up to 11 or 12 stories with a total floor space of between 450,000 and 500,000 s/f. It would be the largest new timber building in the country.

“We think this is where things are heading in the construction industry, which is a very exciting thing,” David Linehan, development manager of Lotus Equity, said. “We love that there is a bit of an arms race at the moment.”

The largest mass timber building to date is Minneapolis’s T3 building, a seven-story, 220,000 s/f office and retail development completed in 2016. Michael Green Architecture was also behind that project.

In 2015, the U.S. Department of Agriculture issued $1.5 million grants to two timber tower designs, one of which was a 10-story condo building by SHoP Architects. Developer Sy Ghassemi tried to make the 120-foot building a reality but pulled out less than two years later, telling The Real Deal “the project just wasn’t feasible.”
SHoP declined to comment for this article. Fariello said the application for that building is the only mass timber high rise proposal he can recall.

“A building that tall would be required it to be non-combustible, it would have to last over two hours [in a fire] without inhibiting the structural integrity of the building,” Fariello said. “Our concern is how is that wood is going to contribute to the initial fire. When you have a steel building or concrete you aren’t worried about those things catching fire so easily.”

The other USDA winner was the Framework Project out of Portland, Oregon. A 12-story mixed-use development, that building was on track to go up in the Rose City’s trendy Pearl District until last month when the developer, project^, postponed construction indefinitely citing “changing market conditions … inflation, escalating construction costs, and fluctuations in the tax credit market.”

While mass timber projects can theoretically save money on construction costs, the materials themselves are becoming more expensive. Building supply prices have increased rapidly across the board because of inflation and White House trade policies.

Between June 2017 and June 2018, the cost of steel mill products increased by 12.3 percent, according to the Associated General Contractors of America, due in part to tariffs implemented this past spring. During the same time period, lumber and plywood expenses jumped 18.3 percent, thanks in part to a wood tariff imposed on Canada.

Standing three and five stories tall, respectively, the mixed-use buildings will include retail and office space, as well as apartments atop 360 Wythe. Although both structures will be skinned with brick, their wooden superstructures will remain exposed for occupants to see.

Copeland said Flank’s projects have not progressed faster than a typical steel and concrete building, primarily because his consultants had to familiarize themselves with the materials. However, he said the use of laminated timber has been more cost-effective than traditional materials and he expects more projects to incorporate wood in the future, particularly in less dense parts of the city.

“[Wood construction] is going to be used more and more, there’s just too much of a desire for sustainability these days for it not to be,” he said. “And, aesthetically, it is popular among the people that live and work in them. I think it has a bright future.”