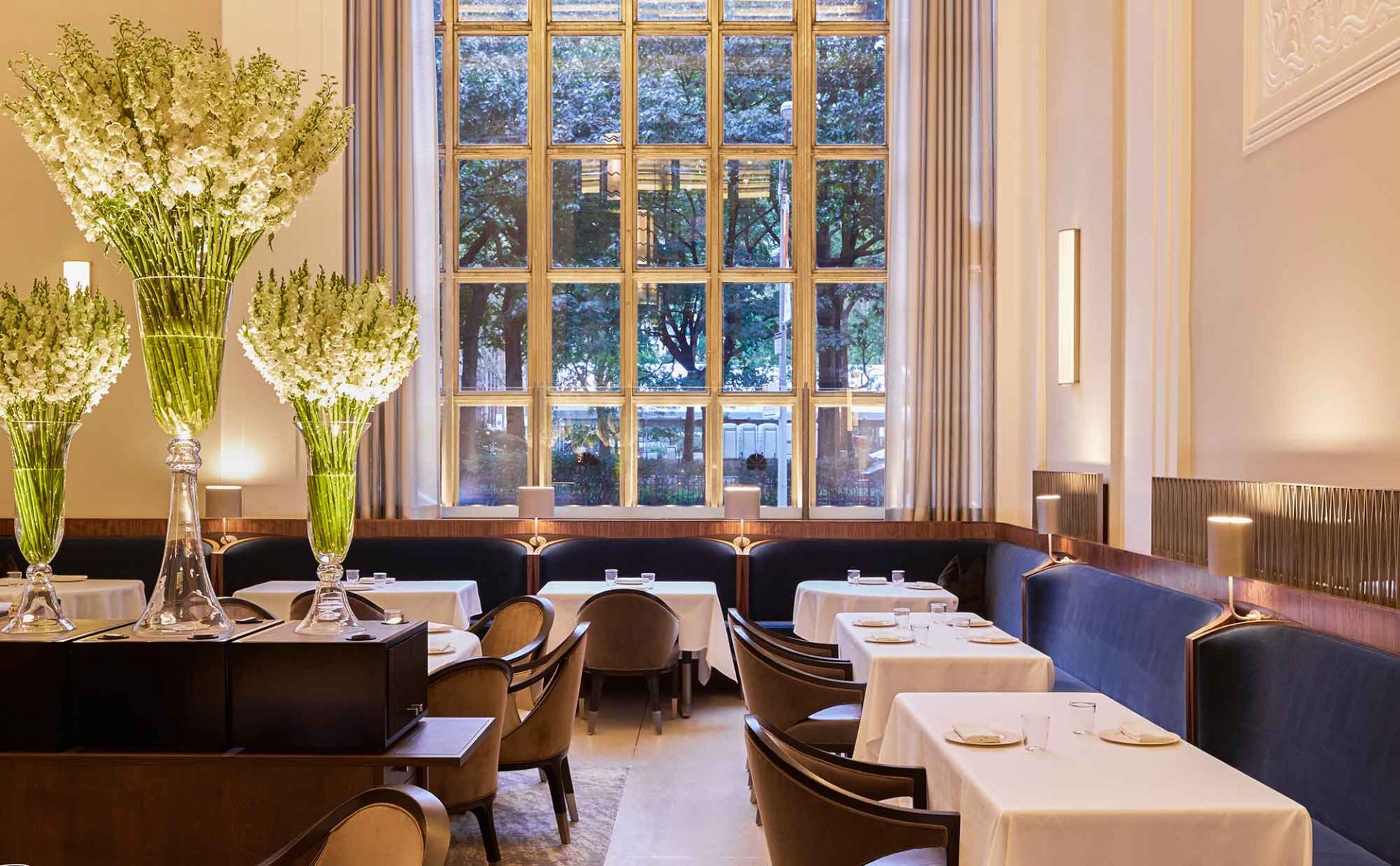 Cook it and they will come; Restaurants, landlords not giving up on NYC

SL Green, the city’s biggest landlord, has reportedly struck a deal with one of the world’s best restaurants that will allow it to reopen after months in darkness.

SL Green has declined to comment and Humm’s spokespeople have yet to respond to requests for a statement.

But, if it’s true, the showcase deal could create a pathway for New York City’s 26,000 restaurants that have been struggling to survive during the coronavirus shutdown.

“Landlords have a lot of power in whether restaurants will come back or not,” Humm told He in the interview featured on his astrolabe blog.

Veteran retail broker Steve Rappaport agrees. During a shutdown that has cost an estimated half a million NYC restaurant jobs, Rappaport, a senior managing director with Sinvin, has been surprisingly busy.

“It’s capitalism in its purest form,” said Rappaport. “Money is often made on other people’s misfortune.”

In the past several weeks, Rappaport has negotiated six new restaurant deals where the landlord has been willing to work with the tenant on concessions that try to make the best of a bad situation.

Most have been willing to shave 25 percent off pre-COVID rents levels and offer payment step ups for the first few years. Extended free time and caveats providing reduced rent in the event of future shutdowns are also part of the new normal.

“He’s come up with what he calls the 20/20 solution,” said Rappaport of the bread maker, who operates two permanent locations in Chelsea and Hell’s Kitchen. “To give comfort to his customers in these times, he’s lowered prices by 20 percent and increased the size of his loaves by 20 percent.”

At 249 Bleecker Street, Sullivan Street Bakery has opened a “popup” in the 650 s/f formerly occupied by olive oil specialist, 0liver & Co., and they have taken over the former Rollio Pizza joint at 437 East Ninth Street under similar terms.

Rappaport calls them “popup” because the leases negotiated on the spaces – where pre-COVID asking rents were $8,500 and $5,000 a month (respectively) – are “indefinite.”

“In both situations, the landlords were willing to do a short-term deal for a percentage of sales agreement,” explained the broker. “This works to the advantage of both sides.”

Details have been sparce on headline-making deals that have been signed during the pandemic, including Rockefeller Group’s 16,500 s/f lease with Avra Estiatorio and renewal with Ted’s Montana Grill at 1271 Avenue of the Americas.

But when it comes to the meat and potatoes, small and mid-sized landlords – many hurting themselves from decimated building tenancy – appear to be meeting restaurants in the middle.

“Our landlord has been extremely accommodating,” said Holly Oh Diamond, a full-time recruitment consultant who sees opportunity where others see adversity and has negotiated a lease for her first restaurant at 41 West 24th Street in the Flatiron District.

“Owning a restaurant in New York City is never easy, especially in the heart of Manhattan,” said Diamond, who is going into the venture with husband, David, and brother, Suby Oh. “But where others see risk, we see opportunity.

“For young foodies like us, owning a restaurant is the American Dream. Because of the risky environment, we were able to sign a lease that would have been impossible for us before because our landlord, Two Kings Realty, has been really understanding, giving us more flexibility.

“A lot of my family have told me we’re crazy opening a restaurant when so many are shutting down and people are leaving New York, but we’re not just giving up. We’re pushing forward.”

Before COVID, Flatiron had become a favorite culinary corner of the city with flagship eateries like the aforementioned Eleven Madison, Gramercy Tavern, ABC Cocina and Blue Smoke acting as a magnet for newcomers such as Rezdora and Odo. Blended into the mix were another 220 restaurants, bars and quick and casual food establishments, representing four out of every 10 ground-floor businesses, according to the Flatiron/23rd Street Partnership.

Together with another 60 restaurants in neighborhood hotels, they catered to the 800,000 daytime workers in the Flatiron District, crowds of tourists and booming residential population.

Right now, Diamond admits that the passing traffic at what will be her Mista Oh restaurant on the corner of 24th and Sixth is pretty light. “In terms of location, you can’t get much better normally,” said the entrepreneur. “But two years from now, I really believe that things will be back to normal.  That’s the hope I am holding onto.”

It’s a hope that others seem to share. Despite city reticence on indoor dining in Manhattan, a plethora of new restaurant leases have been signed, including the Temperance Wine Bar at 38-40 Carmine Street, Pasta By Hudson at 180 Seventh Avenue,  and Spider in the Garden, a new concept from East Village restaurateur Ravi DeRossi at 511 East Fifth Street.

Steve Rappaport repped tenant and landlord in the Mista Oh, Temperance and  Spider in the Garden leases.

Daily Goods, the nutritionist-curated food and beverage concept with locations in Chelsea and FiDi, is also expanding.

“We are expanding now because the Daily Goods brand was born in New York City, designed for the New York City customer, and we remain committed to this market long-term,” said a spokesman for the brand.

“The availability of healthy products, and the role that health and wellness brands play for NYC residents, is more crucial than ever before.”

Dan Bodner of DBodner & Co. represented Daily Goods in a lease for 300 s/f s/f at the former Philly’s Pretzel Factory space at 86 Chambers Street in Tribeca. The Landlord was represented by Ravi Idnani and Andrew Stern of Newmark Knight Frank.

The spokesman said the new juice and smoothie store should open late September.

At 355 Greenwich Avenue in Tribeca, Winick Realty’s Lee Block brokered a new lease for Chanson Bakery’s second Manhattan location, one of three full-service dining deals he’s done since the start of the pandemic.

“In general, landlords are giving these restaurateurs an opportunity to try to ramp up business and, depending on each situation, getting creative with clauses to protect parties if something like this happens again,” said Block, who is also among the industry’s optimists.

“New York City is resilient,” he said. “Everyone has faith the city will come through this better than before.

“There is huge pent up demand from the customer base. Now that Labor Day has passed and people are moving back and there’s a slow trickle of office workers coming back, restaurants will be the beneficiaries of that pent up demand from people who have been holed up for months and  really want to get out and socialize.”

He has just signed a new deal for the Gotham Bar and Grill space 12 East 12th Street where former managing partner Bret Csencsitz has reportedly worked out a deal to buy out the restaurant and acquire the use of the Gotham name from the original restaurant partners in the 36-year-old New York staple.

While Roseman declined to comment, he said, “Existing NYC restaurateurs as well as operators from across the country are looking for opportunities that don’t require a huge investment. We had no less than four offers [on the Gotham space] and must have shown the space to dozens of operators.

“I was pleasantly surprised at the voracious appetite of restaurateurs and their rosy outlook towards the future.”