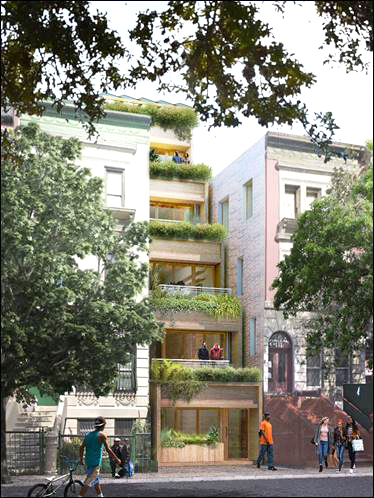 The New York City Department of Housing Preservation and Development (HPD) and the American Institute of Architects New York Chapter (AIANY) announced the selection of five New York City-based firms that will advance to the final stage of the Big Ideas for Small Lots NYC design competition.

The competition, which launched in February 2019, invited architects and designers from around the globe to submit proposals that addressed challenges of developing high-quality affordable housing on small, irregular lots throughout the city.

The five finalists’ designs rose to the top of the 444 proposals from 36 countries across five continents that HPD received over the two-month submission period.

“The urgency of the affordability crisis requires us to continually push the envelope to meet our city’s diverse housing needs. To unlock some of our most difficult-to-develop sites we needed to take a fresh approach, and taking that leap has clearly paid off,” said HPD Commissioner Louise Carroll.

“Out of the hundreds of proposals that we received from teams around the world, these five were unparalleled in their use of innovative design to solve for the challenges that have left these lots underutilized.”

“As a jury, we looked for inventive proposals that considered the residents as well as the communities beyond. We discussed design quality broadly, with a focus on technical feasibility. Accessibility, both physical and economic, was also an important consideration,” said AIANY 2019 President and jury chair Hayes Slade, AIA.

“The impact of the selected proposals will stretch far beyond the individual lots specified by the competition. Despite their small footprint, their ripple effect on the immediate block, neighborhood, and city will be outsized.

“This is before we consider the influence they will have through publication and study. These projects will become influential case studies for small lots in New York and other urban areas.”

The competition is part of the Mayor’s accelerated Housing New York 2.0 plan, and furthers the City’s efforts to unlock difficult-to-develop sites for new housing.

By engaging the architectural and design community as critical partners in the development of affordable housing, HPD hopes to demonstrate feasible, replicable housing solutions across various site and neighborhood conditions and promote excellence in urban infill design.

The winning proposals for Big Ideas for Small Lots NYC were selected by a panel of nine jurors and evaluated on their design, replicability, and construction feasibility.

AIA New York will curate an exhibition at the Center for Architecture highlighting the winning submissions that will open on August 1st and be on display through the Fall of 2019.

The finalists were “Mass Green Living” by Anawan/101 + Kane AUD. The project features five units in a 5,900 s/f building. The proposal is a collaboration between the principals of two architecture firms: Jeremiah Joseph of Anawan/101 and Ted Kane of Kane AUD;

“Greenfill House as Garden” by Michael Sorkin Studio has seven units in a 4,430 s/f building;

“Fold and Stack” features five units in a 5,540 ss/f building organized around an interior courtyard. The submission was selected based on the design’s intelligent use of modular construction. The Architect is OBJ, a collection of four architects who currently work for Diller, Scofidio, and Renfro in New York City and Olson Kundig in Seattle, Washington; “Only If” by Only If Architecture features seven units in a 4,900 s/f building. The submission was selected based on its use built-ins to produce compact yet functional spaces. The Architect: is a New York City-based design practice for architecture and urbanism founded in 2013 and led by Adam Snow Frampton, AIA, and Karolina Czeczek.

“More with Less” by Palette Architecture a 3,700 s/f building that features two units, one of which is a co-living space with four individual rooming units.

The five finalist teams will work with HPD to convert their designs into an affordable development proposal to be reviewed and approved by the agency. HPD will facilitate a series of workshops, networking opportunities, and other tools to assist the teams in developing their proposals.

It’s game time: Industry to flex its muscles for JDRF