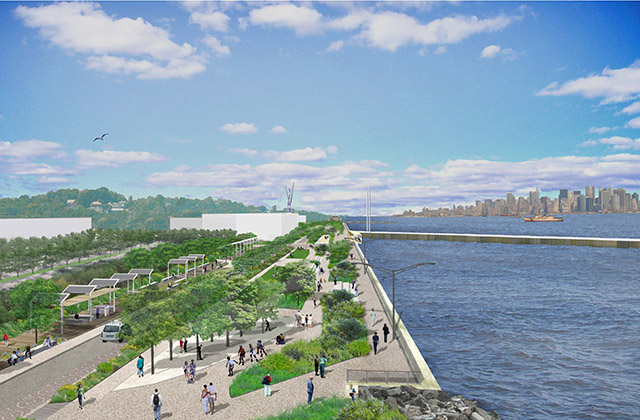 The city has issued an RFP seeking developers for a two-acre affordable housing project on Staten Island’s north shore.

Stapleton Site A is a vacant lot south of Hannah Street that is part of the New Stapleton Waterfront District, a 35-acre decommissioned Navy Base (rendering pictured top via HPD).

The New York City Economic Development Corporation (EDC) is overseeing the City’s redevelopment of the New Stapleton Waterfront into a mixed-use neighborhood with housing, waterfront open space and retail and community facility uses.

It will also include significant infrastructure improvements such as road reconstruction, bicycle and walking paths, and better connections to public transit.

The Request for Proposals (RFP) seeks qualified development teams to submit plans to build 100 percent affordable housing on 108,000 s/f of land owned by the city.

“Creating new affordable housing in neighborhoods like Stapleton that have been hit hard by COVID-19 will be an important part of the City’s recovery. As a part of the Bay Street Corridor Neighborhood Plan, we worked hand in hand with residents and EDC to envision new, high quality affordable housing alongside improvements to green space and important neighborhood amenities,” said HPD Commissioner Louise Carroll.

“Now, we’re looking for thoughtful partners who will keep these community needs at the forefront of any plans to transform this vacant lot into 100% affordable housing.”

The Stapleton section of the North Shore is one of the many New York City neighborhoods significantly impacted by the COVID-19 pandemic. Along with the greater public health and economic impacts of the virus, COVID-19 has exacerbated underlying inequities that are pervasive in communities of color that have experienced historical disinvestment.

These underlying issues include a lack of entrepreneurship and business development opportunities, and unequal access to safe open space and secure, affordable, and healthy housing. This RFP strives to address these inequities by ensuring that the vision and goals for each project are responsive to the expressed community needs and intensified socioeconomic challenges that many face in the neighborhood.

“Today marks an important step in implementing our Stapleton Waterfront, which will activate 36 underutilized acres for the public’s benefit,” said James Patchett, President and CEO of New York City Economic Development Corporation. “We congratulate HPD on this milestone and we look forward to supplementing this much-needed affordable housing with a reconstructed Front Street, new sewer infrastructure, and public waterfront open space.”

The City invites developers to submit proposals for the design, financing, construction, and operation of new affordable housing and community amenities on City-owned land. HPD is committed to increasing opportunities for, and strengthening the capacity of, Minority- and Women-Owned Business Enterprises (M/WBE) and non-profit developers. In keeping with the City’s new equitable ownership requirement, development teams must include an M/WBE or non-profit that will hold at least 25% of the managing ownership interest in the project, entitling it to at least 25 percent of the total economic benefits of the project, net of any tax credit limited partner interests.

A pre-submission conference will be held on January 5, 2021. The deadline for submissions to the RFP is March 23, 2021. For more information on the Stapleton Site A RFP, visit the HPD website.