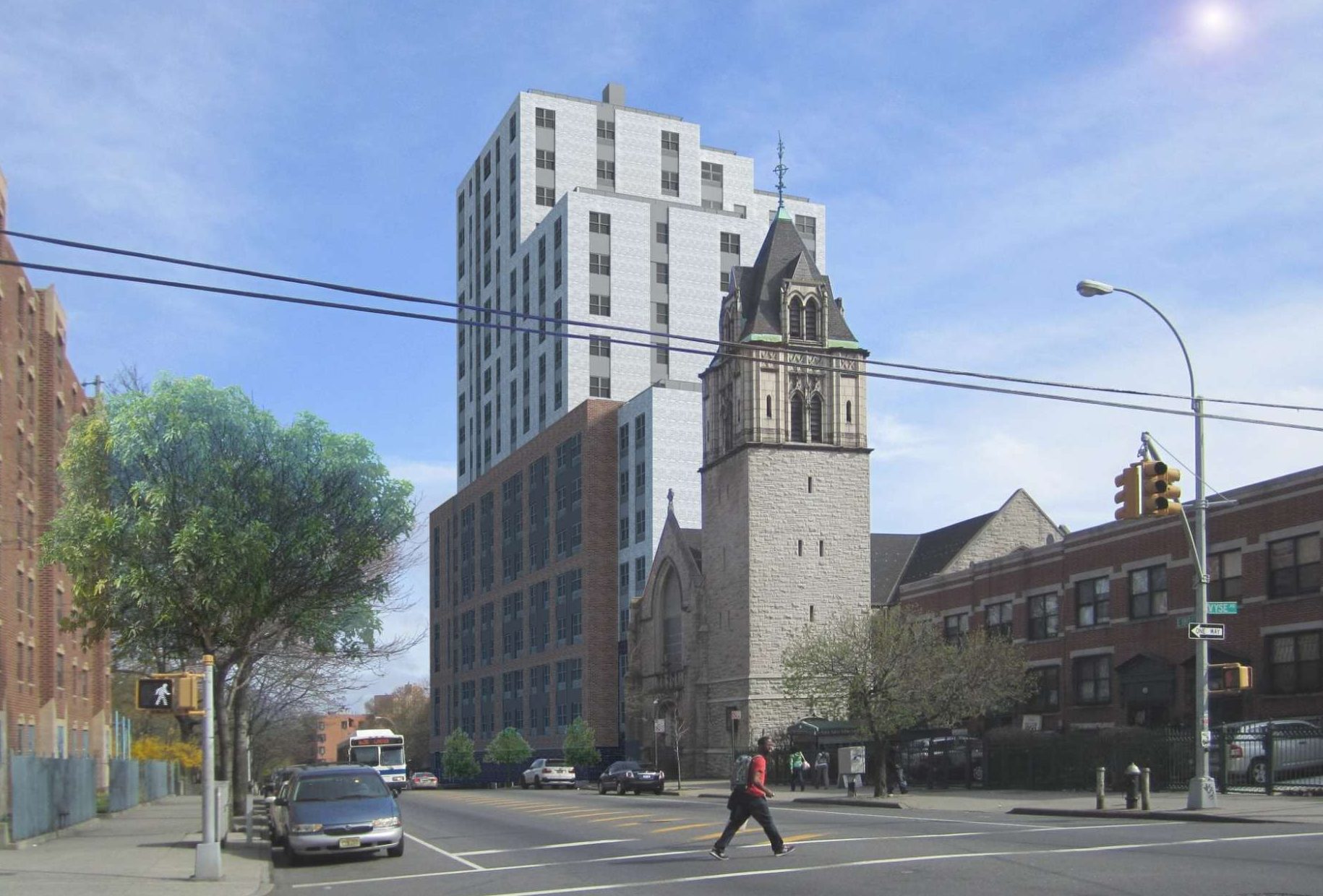 City officials joined Phipps Houses to celebrate the opening of the first completed residential building in the Lambert Houses redevelopment.

The 163-unit affordable housing residence replaced a 44-unit demolished building at 988 East 180th Street, which was vacated with all tenants relocated within the existing Lambert Houses development.

The entire redevelopment will demolish and replace the existing Lambert Houses with 13 new buildings, increasing the number of residential units by nearly 1,000.

Ultimately, the 12-acre project will create 1,665 permanently affordable residential units with a host of tenant amenities, retail space, and community facilities. The new buildings will also have up-to-date mechanical systems and energy efficiency standards, as well as an improved configuration and services for greater resident service and security.

“As each of these superblocks come down piece by piece, residents will witness the renewal of their community as their homes are rebuilt to be safer, smarter, and more energy efficient,” said New York City Department of Housing Preservation and Development (HPD) Commissioner Louise Carroll.

“I want to commend our partners at Phipps Houses for taking on this ambitious project which will not only significantly improve conditions for existing residents but will also create even more housing opportunities for low-income New Yorkers.”

Adam Weinstein, President and CEO of Phipps Houses, commented, “This is a wholesale course correction of the mistakes of the Urban Renewal era.

“Together with our public and private sector partners, and informed by our residents, we are creating an entirely new, enlarged, vibrant community of new mixed-use affordable housing with exceptional tenant amenities, including concierge services, as well as improved retail and need community facilities, all with exceptional transit access and both public and private open space,” said

988 East 180th Street includes a mix of studios, one, two, and three-bedroom units. The 18-story building is located just south of the Bronx Zoo and is nearby the 2 and 5 subway lines.

It will have a 24-hour attended lobby, an on-site manager, laundry, and bike storage. The building was financed through HPD and HDC’s ELLA program to serve extremely low- and low-income households, as well as the Mandatory Inclusionary Housing program to ensure the homes will be permanently affordable

The rest of the redevelopment will occur in four more phases of demolition and construction.

Now that tenants of the next buildings to be demolished are ready to be relocated to 988 E 180th Street and throughout the development, the demolition and new construction process can begin again.

The first two phases of this $600 million project are designed by Dattner Architects and built by Monadnock Construction, Inc.

In addition to addressing key issues of security, undefined open space, and outdated structural and mechanical systems, the design also aims to re-integrate the buildings with the streetscape and neighborhood.

The development has also provided the School Construction Authority with land for a potential new school should the need arise.