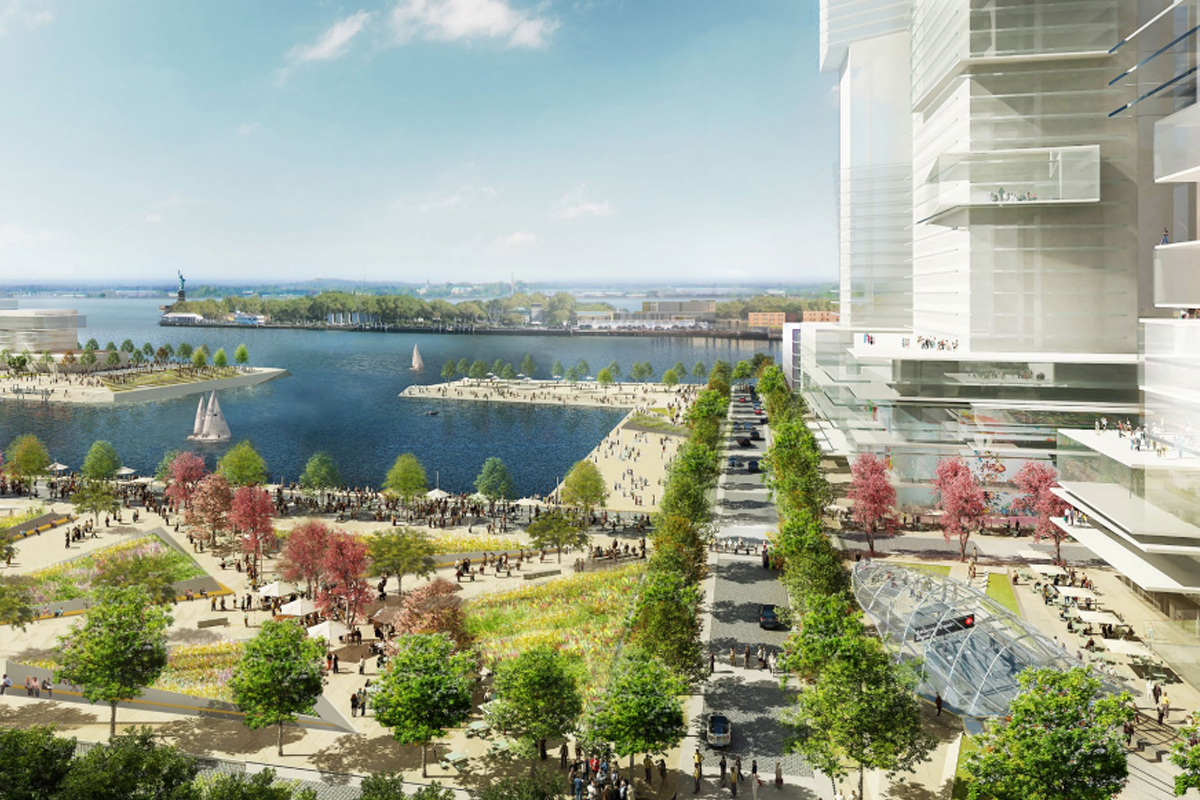 The event was hosted by the Brooklyn Chamber of Commerce, and it drew a packed room. Ward, who previously headed up the Port Authority of New York and New Jersey, used renderings, visuals, and statistics to make the case for a $3.5 billion transformation of Red Hook and the Columbia Waterfront District.

“There’s no other site like this,” Ward told the audience. “Hudson Yards is miniscule compared to Southwest Brooklyn.”

The Hudson Yards site on the far west side of Manhattan covers 28 acres. Aecom’s Southwest Brooklyn vision, which includes Red Hook and the Columbia Waterfront District, covers 246 acres, about eight times the size of Hudson Yards.

The first page of a handbook passed out to attendees contains one sentence: “The history of New York is not the preservation of the environment but the construction of a better environment.”

The second page asks: “What do you want your city to be?”

The rest of the booklet contains detailed information on AECOM’s vision and statistics ranging from median income and ethnicity demographics, to cost-benefit analysis pie charts.

The vision calls for up to 45,000 units of housing to be built, to a total of 45 million square feet.

Ward was careful to point out during the presentation that the “framework” he was presenting was just “a set of ideas,” and not any kind of official “proposal.”

AECOM raised eyebrows when it first revealed its ambitious idea for Red Hook and Southwest Brooklyn back in September at a similar event also held at an NYU building.

It generated some healthy skepticism, with one story covering the event headlined: “Construction Giant Wants To Turn Red Hook Into A Fantasyland With Subway Service.”

But in a city with a serious housing crisis, more than 50 percent of residents rent-burdened, and a need for more jobs to match the population growth that is expected to add one million new residents in the next 25 years, Ward argued that a vision this grand is necessary.

“One of the main things we were focusing on when looking at this and thinking about the fabric of the city, is that no development leads to gentrification,” said Ward.

“That seems counter-intuitive, but if you look at San Francisco and how they ended up approaching their need to maintain the character of their neighborhoods, and by freezing zoning in a particular static way, what it does is drive up housing prices to a level that only the wealthy can afford…and that is gentrification at its worst.” 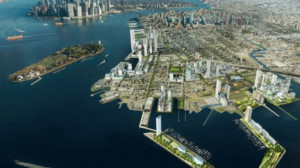 Ward talked about the importance of development with context, pointing out that in areas like Williamsburg, the development that has taken place there has been without context — not enough schools, streetscapes, green space — and the community isn’t a “democratic integrated community.”

“Do we want that same kind of development to go south?” he said. He argued that more development in Red Hook is inevitable, but if done right, it can have a positive effect on the community. 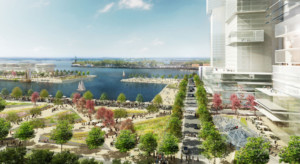 “We need to do something, because If we don’t do something, something else that might not have the positive outcomes that we all want, might well happen,” said Ward.

Anthony Vitale is an agent with Citi Habitats, and while he lives in Carroll Gardens, he has spent a lot of time in Red Hook over the years, and has been renting a commercial space on Van Brunt Street since 2012.

He believes that residents of Red Hook would not be welcoming if the city gave the go-ahead for a vision like Aecom’s.

“People who live in Red Hook don’t want the change, they want it to stay the same because the prices are low,” said Vitale. “It’s actually scaring the residents that live there now.”

The one big glaring problem with Red Hook is the transportation issue, which is one of the main reasons it hasn’t experienced more development, said Vitale.

“It’s just not enough for the amount of people living there already,” said Vitale of the available mass transit in the neighborhood.

“In order for something to happen dramatically here, there needs to be a train station. If that happens, it will be just as big if not bigger than Williamsburg.”

While Red Hook now has a Citi Bike station, which has led to an increase in foot traffic during the summer months, in the winter, Vitale has noticed that many restaurateurs only open their doors two days a week, and he blames the lack of transit.

“If something like thi s[AECOM’s idea] was to go down, a lot more people would start investing in Red Hook,” said Vitale. “We deal with a bunch of small landlords sitting on property waiting for that to happen.”

While Ward emphasized in his presentation that “smart development,” that which takes the community and context into account, is the best way to stop gentrification, Vitale believes it’s too late to be worrying about that.

He pointed to the number of big-name companies that have planted flags in Red Hook, including the new Tesla outpost on Hamilton and Van Brunt Streets.

Ward told the audience that AECOM has discussed the plan with Mayor de Blasio’s administration, but didn’t ask for an endorsement from them, instead asked for long-term co-operation to continue talking about the vision.

“Clearly, the city must be engaged, but what’s hard right now is the city and state need to be engaged, which so far hasn’t been going great,” said Ward.

“Perhaps with the change in Washington Democrats will see common cause for the city and work co-operatively. It’s all going to require leadership from the state.”

Using public-private partnerships will be “required” for the project to succeed, said Ward, who said it wouldn’t be unheard of to attract private equity investment in a subway tunnel.

MANAR to merge with Hudson Realtors

DONE DEALS: Roundup of some the week’s residential sales