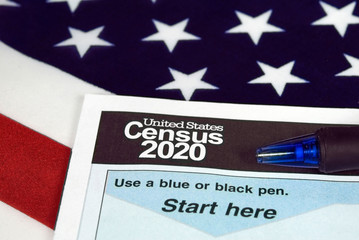 Would anyone who wants a share of $74 billion please stand up.

The 2020 Census officially gets underway tomorrow (Thursday) and the real estate industry is backing efforts to promote the count.

REBNY is warning that it offers New York its only chance to collect its fair share of government funding and would prevent the redrawing of voter lines that could cost the city two seats in Congress.

A low response “will have a negative effect on our city and state for decades to come,” said REBNY chairman Bill Rudin in a video posted online for members. “The Census is the basis for determining how many congressional seats that we have and what our allocation is from federal funding for the city and state.”

Beginning tomorrow, every household in the United States will begin receiving 2020 Census forms. Being counted is easier than ever with the ability to see visiting enumerators supplemented by options to mail, phone or upload your info.

Basha Gerhards, REBNY vice president of policy and planning, said anyone concerned about the government butting into their business should participate as it will prevent unwanted visits to their homes.

Information given by participants is kept confidential by the Census Bureau, which is not allowed to release information publicly in a way that could identify any member of a household.

“As long as everyone opts in, you don’t have to worry about somebody knocking on your door,” said Gerhards. “Pre-empt the visit if that’s what’s causing a level of anxiety. It’s just important that we have an accurate baseline.”

This year’s goal is to get an 80 percent response so New York City can get an annual $74 billion out of a total $675 billion budget.

New York drastically under-counted during the last count in 2010 when just 62 percent of residents participated.

This time around, the City is working to increase the headcount and has already been collaborating with the Census Bureau on a variety of different surveys. “Together, they constantly monitor the size of properties, exits and entrances, immigration, births, deaths,” said Gerhards.

The Census helps determine federal funds the city gets for schools, community development as well as other allocations for the state that are based on population size.

While they won’t disappear in the event of an under-count, “It’s a question of who pays their share,” said Gerhards. “In the city, we pick up the slack. We’re seeing this play out in the Medicare discussion. The state has to fill that void.

“From an industry perspective, it’s a question of will real estate pay a greater share of property taxes? Will we see quality of life go down if we have to fill that budget gap? It’s always concerning when the city is spending beyond its means.”

Joseph Salvo, chief of demographics at the NYC Department of Planning, said the count tends to be worse in the outer boroughs, with the visiting enumerators having to guess the number of people in unresponsive homes based on similar homes. In 2010, this resulted in a reported spike in vacancy of 300-400 percent, which Salvo said was later believed to be erroneous.

Carlo Scissura, president of the New York Buildings Congress, believes there’s too much at stake for New Yorkers to be complacent.

“If we undercount and we go to get federal money to build affordable housing, they may come back and say, ‘Why are you building if you don’t have the numbers of people you say you have?’” he said. “And it will cost us two seats in Congress. New York will lose influence when it comes to program distribution across the country, in education funding, in transit funding, in healthcare funding. You will see a major ripple effect on New York if we are not fully counted.”

He added, “The building industry has over 300,000 people, construction, engineering, architecture, the whole industry. This is an industry that should count.”

The potential loss of affordable housing was also noted by Douglaston Development, which has built thousands of regulated units in the city.

Arden Sokolow, executive vice president of affordable housing at Douglaston said, “The projects were financed with programs including Low Income Housing Tax Credits, HOME funds and others whose funding levels are dependent upon the Census count. Without these programs, these homes would not have been created. The Census is a critical aspect of fostering affordable housing opportunities in our city.”

Virus providing a preview of how people will go to work