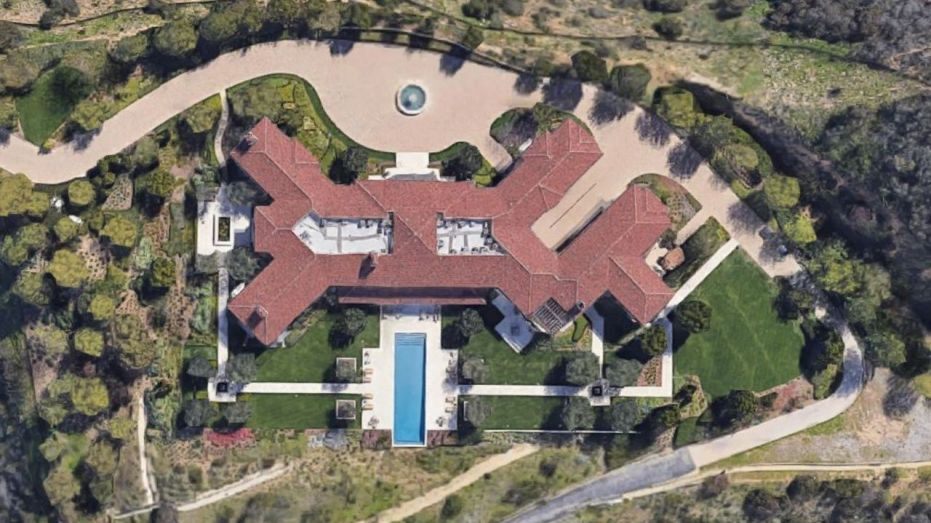 The Duke and Duchess of Sussex, aka Prince Harry and Megan Markle, are waiting out the coronavirus in a new Beverly Hills home.

The famous couple and their son Archie are among a slew of celebrities who haven’t let a global pandemic interrupt their moving plans.

“Kelly Clarkson’s Encino Mansion”
Kelly Clarkson owns a ranch in Montana, a lake home in Tennessee and a third home in Encino, California (above) that is now for sale at $9.995 million. With almost 10,000 square feet and eight bedrooms, Kelly’s California home includes a gourmet kitchen, a master suite with its own patio, a pizza kitchen and a separate guest house with two more bedrooms.

“John Lennon’s Palm Beach Mansion”
A Palm Beach home that was designed by Addison Mizner in the 1920s and purchased by John Lennon and Yoko Ono shortly before Lennon’s death in 1980 is for sale at $47.5 million.  The 14,000-square-foot home includes a tennis court, two swimming pools, ocean views and still retains the Mizner look that is a big part of ritzy Palm Beach design.  Neighbors include Rod Stewart, James Patterson and President Trump’s Mar-a-Lago. Yoko sold the home in 1986.

“Eva Sells Tom Cruise Home”
Eva Longoria has sold a Hollywood Hills home that she bought from Tom Cruise in 2015. Eva has been using the three-bedroom home with a four-bedroom guest house as a second home as she lives in a larger home in Beverly Hills that she bought in 2017. Eva was originally asking $14 million for the Hollywood Hills home but only got $8.25 million.

“Hereeeees Ed McMahon’s Beverly Hills Home”
Ed McMahon’s longtime Beverly Hills home (above) where he lived when he was The Tonight Show announcer, is for sale at $6.795 million. McMahon opened the show 6,395 times with average viewership about three times more than today’s night-talk shows – more viewers than Jimmy Fallon, Jimmy Kimmel and Steven Colbert combined. Ed lived in the six-bedroom home from 1989 until his death in 2009 at age 86.

“Ozzie & Harriet’s Haunted Home For Sale”
One of Hollywood’s most bizarre legends is that the former Ozzie & Harriet home, where the TV Nelson family lived and was used for some of the show’s scenes, is haunted. The current owner, Law & Order: SVU-star Christopher Meloni, has put the 5,600-square-foot home in Hollywood Hills on the market at $6.5 million. Ozzie died in the home’s master bedroom in 1975.

“Shopping Mall Kingpin Mansion – Built On Dean Martin Home Site”
One of Beverly Hills most spectacular contemporary homes was built in 1995 by shopping center developer Guilford Glazer on a site that was Dean Martin’s longtime home. The current home is almost 27,500 square feet on sale at $69.5 million.

“Jodie Foster’s Calabasas Home”
Jodie Foster has sold her 5,000-square-foot Calabasas, California home just two days after it was listed. Jodie bought the home with four bedrooms and a pool in 2005 for $2.26 million. She was asking $2.85 million but the final sale price is still pending.