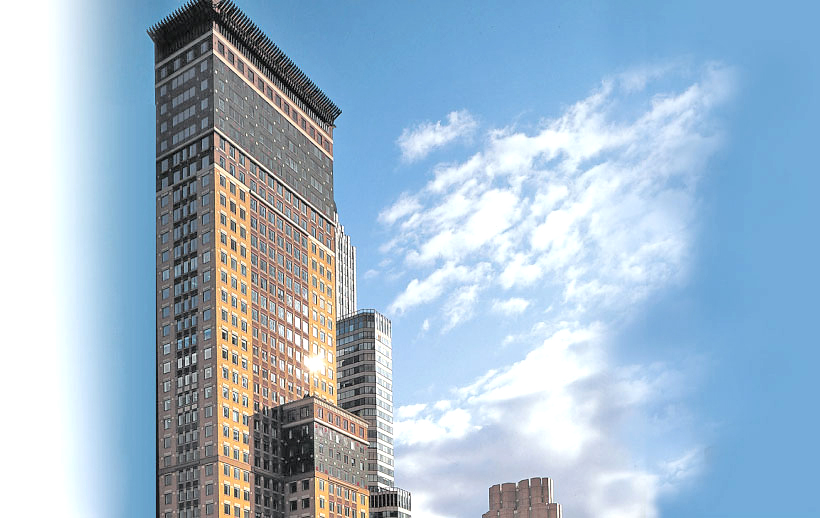 The transaction marks the fifth time since 1988 that SBO, the company’s longtime financing intermediary, has arranged debt for this property.

The 555,000-square-foot, 60-story building is one of Manhattan’s premier office properties.

“We have enormous pride in the work that our firm has put into developing, owning and managing Carnegie Hall Tower over the last 30 years. This financing is yet another significant milestone in this property’s storied history,” said Jeremy Shell, Executive Vice President of TF Cornerstone. “We are thrilled to have worked with our trusted advisors at The Singer & Bassuk Organization and with Metropolitan Life Insurance Company, to have successfully refinanced the property.”

“This is truly a multi-generational property and one that the family is extremely proud of. Our senior generation was transformational in extending the Plaza District to the west with the development of Carnegie Hall Tower. Now the younger generation hopes to continue that legacy and maintain a beautiful and unique office building,” said Jake Elghanayan.

“This is the fifth financing we have arranged for Carnegie Hall Tower since 1988,” said Andrew J. Singer, Chairman and CEO of The Singer & Bassuk Organization. “As one of the great real estate families of New York City, TFC’s principals have demonstrated a keen ability to ignite neighborhood growth and triumph over industry-wide obstacles for six decades. Playing a role in their successful projects has been a tremendous honor and we are excited to have completed yet another milestone financing for them.”

Carnegie Hall Tower was designed by César Pelli and has won an Honor Award from the American Institute of Architects. The property, distinctive amidst Manhattan’s skyline, has a vaulted entrance and through-block, grand lobby which is ornamented in Italian marble, brass and hardwood accents. Many floors offer 360-degree views of New York City, including those of Central Park, the sparkling skyline, the Hudson, the East Rivers and even the Atlantic Ocean.

Carnegie Hall Tower was built in the late 1980’s.

“Delivered in 1991 during an economic recession, the property took time to lease up and stabilize,” added Shell. “The market was soft but the principals of our firm were persistent in waiting out the vacancies of the early ‘90s. They went to great lengths to keep the property solvent and to ultimately realize their vision for Carnegie Hall Tower. Looking back twenty-five years later, it was a courageous and principled decision that is still paying dividends today.”

The award-winning design of this modern skyscraper echoes the architectural elements of its landmark neighbor, Carnegie Music Hall. Located in the highly desirable Plaza District, Carnegie Hall Tower is surrounded by a unique array of world-renowned restaurants, shopping, hotels and entertainment. The location offers convenience to a host of businesses and is in close proximity of Central Park, as well as major subway and bus lines.