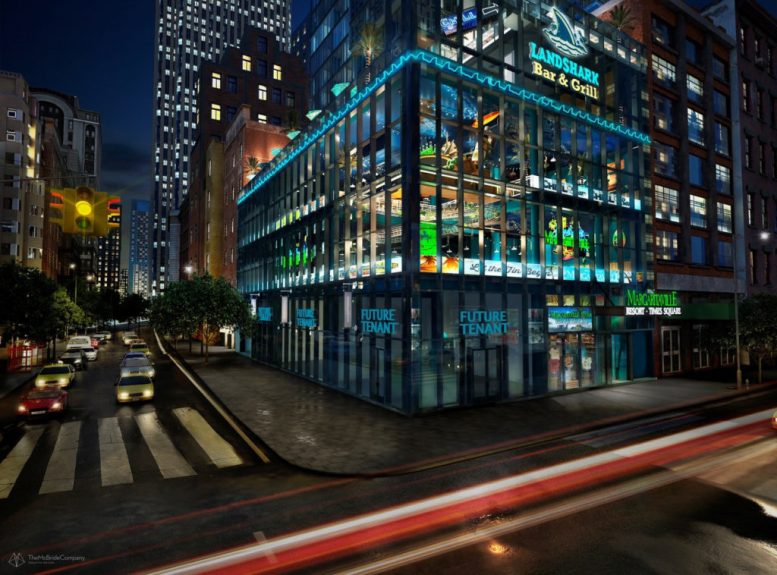 Car guys do a drive-by of Margaritaville

MHP Real Estate is in talks with a luxury car dealership eyeing the ground floor retail space at the under-construction Margaritaville Resort in Times Square.

David Sturner, president and CEO of MHP, which is developing the hotel with Soho Properties, in partnership with Chip and Andrew Weissʼ Flintlock Construction, said the luxury car shop is just one of several potential tenants circling the remaining space at the 29-story hotel themed around singer Jimmy Buffett’s Margaritaville brand.

“We have seen a lot of actions and a bunch of offers,” said Sturner. “We’re not in a rush, because we have a hotel (as an income-earner) so we’re not giving away the space. But I don’t see it sitting empty for long. Times Square sees 53 million visitors a year.”

The base of the 234-room hotel features nearly 24,000 s/f of retail, the bulk of which have already been leased to Buffettʼs Margaritaville restaurant and shop. The singer himself has no interest in the hotel development.

MHP brokers Christine Emery and Julie Kang are leading marketing for the remainder of the space, roughly 4,850 s/f on the ground floor that could be sub-divided. With 20 ft. ceilings, two columns and a coveted corner location, the space has attracted a number of potential tenants, according to Sturner.

Times Square, which is home to several cavernous retail spaces designed for companies’ flagship planting needs, is, for that reason, generally a challenging sell to tenants. It isn’t in fact, uncommon for a vacated space to take six months to a year to lease up again.

That said, brokers who specialize in the area told Real Estate Weekly this week leasing activity is healthy.

“In a market where retail is changing, Times Square remains an active retail center,” said Ross Berkowitz of NKF.

Restaurants have been traditionally successful including Carmine’s, Bubba Gump’s and McDonald’s, which opened a tech-heavy flagship location last year at 1528 Broadway.

Berkowitz said experiential themes like Line Friends, which sells merchandise based on emoticons from a South Korean app (1515 Broadway) have done well.

Meanwhile, others trying their hand at experiential in Times Square such as NFL Experience at 701 Seventh Avenue and National Geographic, an interactive ocean exhibition, and neighboring Gulliver’s Gate, a museum of miniatures, both at 229 West 43rd Street, the old New York Times building, have failed to connect with visitors with rumors swirling of imminent closure.

According to a fall, 2019 REBNY report on Manhattan retail, in Times Square on Broadway and Seventh Avenue, between 42nd and 47th streets, average asking rents have increased two percent year-over-year to $1,889 psf.

“The retail environment in Times Square is adjusting as new leases primarily consist of food/beverage and experiential retail uses,” REBNY found. “Owners are willing to cover a greater share of improvements on retail spaces to make it worthwhile for quality tenants. Recent leases consist of Krispy Kreme, JD Sports, and Hard Rock Café.”

As far as taking rents, Berkowitz has found that on average, they hover around $1,500, but the condition of the space is the major variable as to how close it gets to asking rent.

Generally, landlords are willing to make improvements to attract tenants like throwing in an LED sign for increased visibility and basic upgrades.

But because of the high rents and sizes of the storefronts, decisions by companies aren’t made lightly, hence the longer periods between tenants.

And unlike in some communities, there is little “shadow inventory,” as properties in the Manhattan’s tourist mecca are too visible to be marketed all too quietly.

Additionally, for landlords marketing older stock, it can be harder to market space. Because the needs of retailers can be very specific, owners will hold off on making upgrades until there’s a serious offer on the table, said Victor Menkin of Menkin Realty.

However, since unfinished space doesn’t show well, it’s also fairly common to invest in a “vanilla shell,” a basic but built-out storefront and sheetrock walls.
“Large spaces pose an incredible challenge for landlords all over the city but especially in Times Square because of the rental values,” said Menkin. “The most expensive product gets effected significantly.”

Ironically, even the area’s greatest selling point — the endless stream of tourists — can also become one of its pitfalls.

Then there’s the matter of competition from the internet. With many companies content to get their brand recognition that way, landlords have been hoping for experiential tenants looking for big boxes, but they are “very hard to come by” Menkin admitted.

Instead, he is seeing more activity where landlords are willing to invest in subdivisions. “That is absolutely happening,” he added. “It poses an additional cost to the landlord in terms of separate utilities, but the reality is, if you’re sitting on a large space, the revenue that is being lost is very considerable.”

Menkin has seen retail going for as much as $2,000 psf and as low as $250 psf, depending on location, and concessions are generally part of the deal.

He said leases are being hammered out while new inventory keeps popping onto the market.