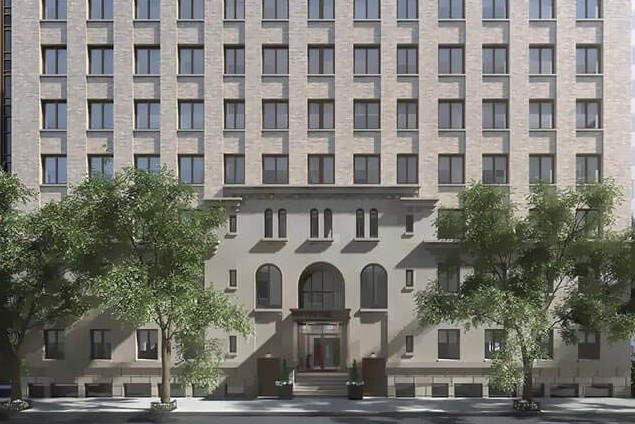 The hospital-to-luxury residential conversion at the former site of the Cabrini Medical Center has a selling point that extends beyond its walls.

“It’s hard to imagine a more convenient and more directly accessible downtown location. You can throw a rock from our building and hit 20 Michelin-rated restaurants,” said Michael Graves, who heads the Douglas Elliman team in charge of sales at the property.

“People fall in love with Gramercy as a community and as a culture. Everybody who buys at Gramercy Square is here because they’re in love with the neighborhood. The neighborhood is the confluence of the most exciting downtown amenities that the city has to offer. You’re right on top of the farmer’s market at Union Square. You’re near a transportation hub. You have a variety of restaurants. They don’t want to be anywhere else.”

The development is composed of four buildings: with names such as The Tower, The Modern, The Boutique and the Prewar (pictured top).

All of the properties, which contain a total of 223 units, were designed by Woods Bagot, an Australian firm whose work includes 203 Jay Street in Downtown Brooklyn and the Baccarat Hotel and Residences in the Plaza District.

According to Graves, the building’s location presented both an advantage and a challenge. The appearance of the building needed to be balanced. It needed to fit into the look of the neighborhood, but not so much that it faded into the crowd.

“We really wanted to embrace the culture and the neighborhood of Gramercy. We wanted to make a building that is both beautiful and fits into the character of the neighborhood,” he said. “The design here was meant to be both timeless and inviting.”

In spite of banking on the project’s location, The Chetrit Group and Clipper Equity, the development team behind Gramercy Square, provided an extensive amenities package that is likely to discourage residents from interacting with the outside world.

According to Graves, the amenities were meant to take advantage of the popularity of health and wellness options among buyers.

“We spent quite a bit of time researching what amenities are really valued by buyers today. We determined that people are very interested in health and fitness. So we programmed amenities that give people a very robust set of options for health, beauty and fitness.”

In total, the complex contains about an acre of amenity space. This includes a children’s playroom, a recreation room, a golf simulator, a media room and a wine tasting room, a catering kitchen and a club room with billiards.

“When we were programming amenities at Gramercy Square, we were thinking, ‘How can we elevate the lives of residents? These are highly-curated amenities that we know would enrich the lives of people,” Graves said.