Bubble back on real estateʼs mind

Proceed with caution. That’s the message from the number crunchers at UBS as the word ‟bubble” re-enters the real estate vernacular.

According to the 2018 index, bubble risk has soared in Munich, Amsterdam and Hong Kong over the last year. In Vancouver, San Francisco and Frankfurt, imbalances also continued to grow. 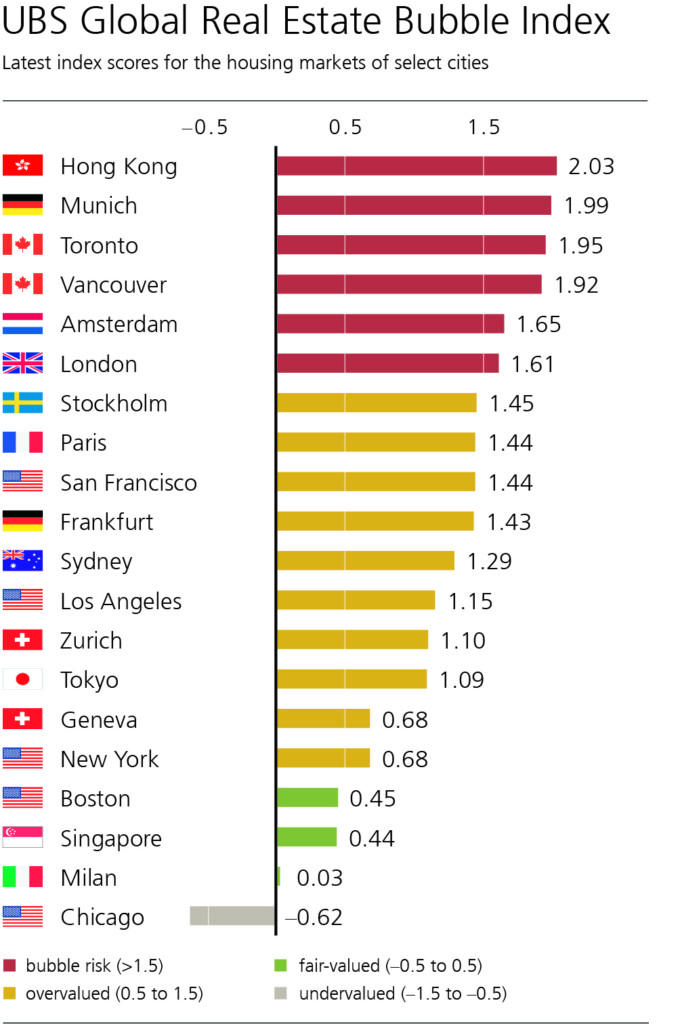 More broadly, index scores fell in no less than one-third of the cities. Stockholm and Sydney experienced the steepest drop and moved out of bubble risk territory. Valuations went down slightly in London, New York, Milan, Toronto and Geneva.

In contrast to the boom of the mid-2000s, however, no global evidence of simultaneous excesses in lending and construction exists.

Outstanding mortgage volumes are growing half as fast as in the run-up to the financial crisis, limiting economic damage from any price correction.

“Although many financial centers remain at risk of a housing bubble, we should not compare today’s situation with pre-crisis conditions,” said Mark Haefele, chief investment officer at UBS Global Wealth Management.

“Nevertheless, investors should remain selective within housing markets in bubble risk territory such as Hong Kong, Toronto, and London.”

According to UBS, in the past year, the house price boom in key cities lost intensity and scope.

Inflation-adjusted city prices increased by 3.5 percent on average over the last four quarters, considerably less than in previous years but still above the 10-year average.

They remained on an explosive uptrend in the largest Eurozone economic centers, as well as in Hong Kong or Vancouver.

But the first cracks in the boom’s foundation have begun appearing: house prices declined in half of last year’s bubble risk cities — in London, Stockholm and Sydney by more than five percent in real terms.

An increasing affordability crisis is also weighing on the bankʼs outlook.

Most households can no longer afford to buy property in the top financial centers without a substantial inheritance.

As property became too pricey for citizens over the past five years in close to all cities additional regulations were introduced ranging from levying stamp duties to rent-control measures.

According to UBS, “Such regulations combined with tighter lending conditions can abruptly end a real estate boom. Overall, low affordability jeopardizes cities’ long-term growth potential and could cause investors to reassess their expectations about future capital gains.”

Overall, the index scores for the US cities in the study are below their 2006 peak values. The divergent rates of market valuation increases since then reflect regional differences in economic growth.

New York remains marginally overvalued ,but its score dropped slightly given the lack of price growth over the last four quarters.

In Boston and Chicago valuations remained mostly low. Chicago in particular remains the only undervalued city in the study globally, with inflation-adjusted prices still almost 30% below their 2006 peak.

On the other hand, scores rose in the West Coast cities of Los Angeles and San Francisco. Notably, real prices in San Francisco climbed nine percent since last summer and now exceed their 2006 peak by more than 20 percent, amid a thriving local economy, significant non-cash earnings by many tech employees, and buoyant foreign demand.

According to UBS, “The city is approaching high valuation risk.”

Fashion and photography to meet at SoHo coworking space