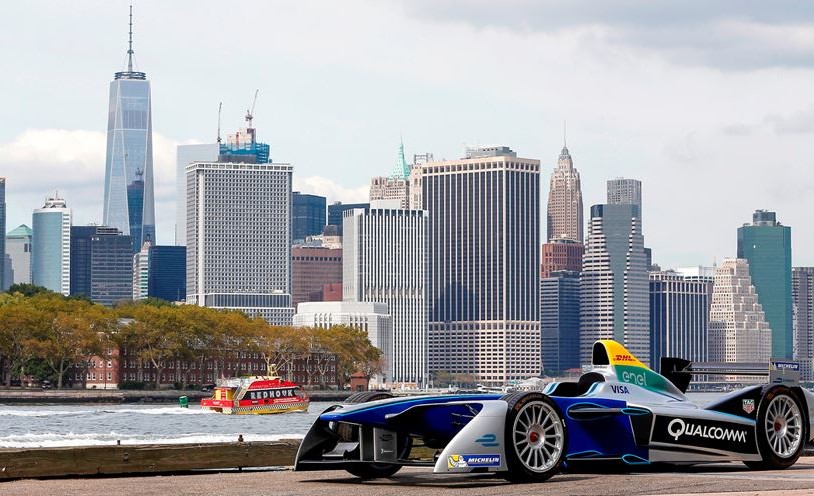 Brooklyn getting geared up to host Formula E race this summer

Formula E, the fully electric racing twin of Formula One, is in the midst of its championship series with upcoming races in Berlin, New York City, and ending in Montreal.

With ten teams from Renault, Audi Sport, Mahindra, Nextev, Techeetah, Andretti, Venturi, Panasonic Jaguar, Faraday and DS Virgin, the NYC ePrix will be one of the last stops on the circuit.

Spearheaded by McLaren Engineering Group and D’Onofrio General Contractors Corp., the project will transform the Brooklyn Cruise Terminal site and surroundings into a 1.21-mile professional race track for the NYC ePrix on July 15 -16, 2017.

The conversion of the race site will involve the installation of several temporary and permanent enhancements, including paving, barriers, platforms, gangways, security fences, canopies and sidewalks.

McLaren’s design will also address efficient and sustainable means to replace site features and facilities after the race – supporting continued operation of the terminal and adjacent facilities on Pier 11, and allowing the race to return year after year.

“Red Hook’s backdrop of lower Manhattan and the Statue of Liberty is one of the most impressive views in New York City. The Brooklyn Cruise Terminal is an ideal location for our event, and it showcases the hospitality of Red Hook and the entire Brooklyn community. This rebuild is a collaborative effort amongst Formula E, McLaren, D’Onofrio, the EDC and the Port Authority, and we are proud of the successful design to build a sustainable infrastructure and permanent solutions which will host our race in New York for years to come,” said John Henderson, COO of JAM Projects, and a spokesperson for the Formula E project in Red Hook. JAM Projects has been contracted as the local operations team for the NYC ePrix.

“Our site/civil and marine teams are using a tremendous amount of creative energy and technical expertise to transform this industrial maritime complex into a professional race track,” says Malcolm G. McLaren, P.E., president and CEO, McLaren Engineering Group, which is celebrating its 40thanniversary this year. “Our custom solution and creative approach is Applied Ingenuity in action.”

“This is an awesome experience for our Company.  We take great pride in the fact that we were a part of the inaugural voyage of the Queen Mary 2 into the newly constructed Brooklyn Cruise Terminal in 2006, and now we are a part of another iconic inaugural event with the New York City ePrix Race being held at the same Brooklyn Cruise Terminal,” says Jerry D’Onofrio, president and CEO, D’Onofrio General Contractors Corp., which celebrated its 25th anniversary last year.