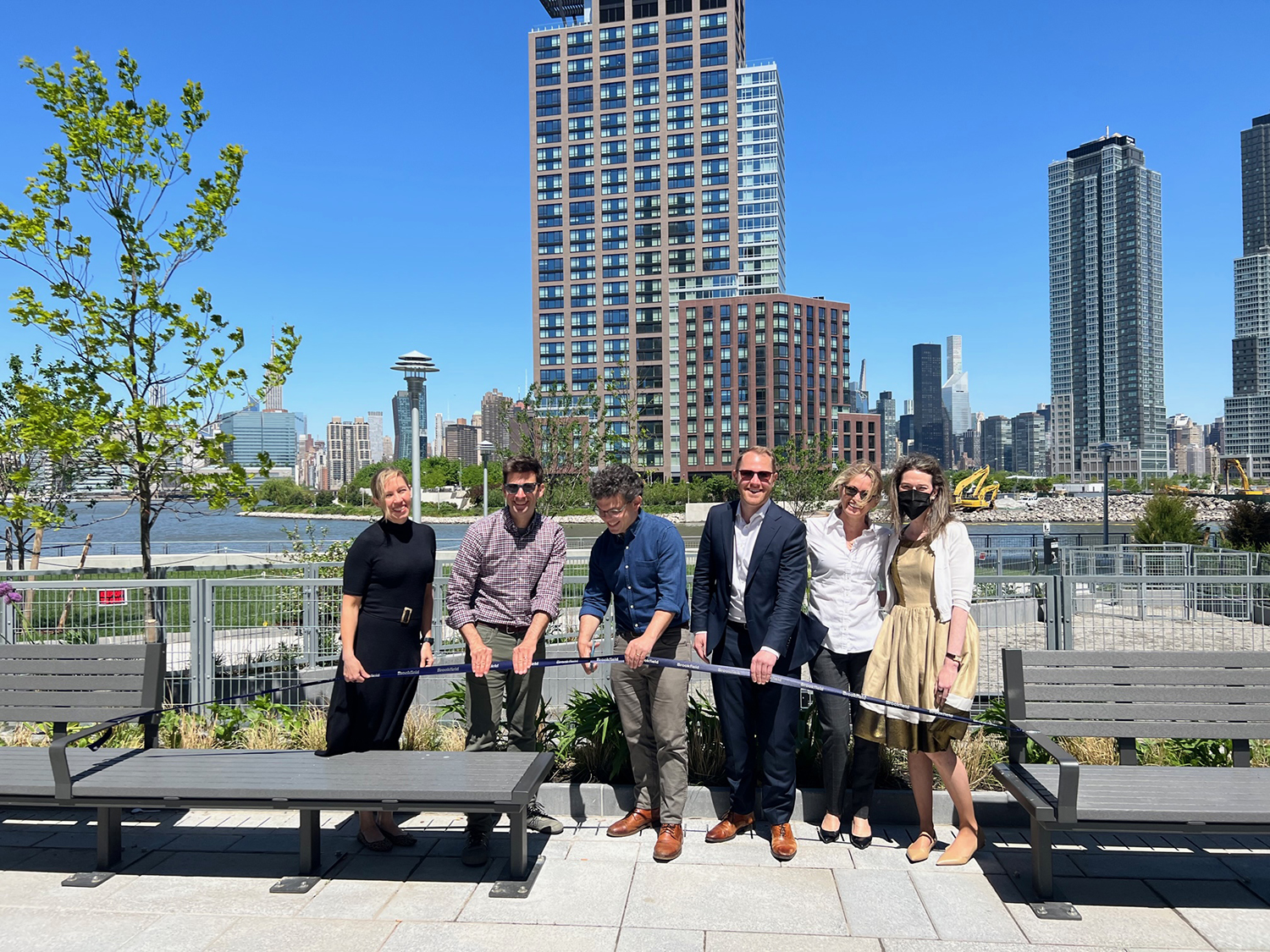 Brookfield Properties, in joint partnership with Park Tower Group, today announced the grand opening and resident move-ins at The Bellslip, a 414-unit mixed-income residential tower on the Greenpoint waterfront. The Bellslip is the third of four residential projects the developers are partnering on within the larger 22-acre Greenpoint Landing master planned development. In addition, the developers, alongside Councilmember Lincoln Restler, former Councilmember Stephen Levin and Katie Horowitz, Executive Director of North Brooklyn Parks Alliance, celebrated the opening of a brand-new public dog run open to the entire community which is the latest piece of the master plan’s four-acre public park and promenade designed by James Corner Field Operations.

“Opening the doors to residents at The Bellslip marks yet another milestone in the evolution of Greenpoint Landing,” said Maria Masi, Senior Vice President, Multifamily Development, Brookfield Properties. “We are excited to continue transforming this formerly industrial area into a dynamic new community that seamlessly integrates with the surrounding neighborhood, connects North Brooklynites to the waterfront with new public parks and provides much-needed housing, both market-rate and affordable, for New Yorkers.”

“I was happy to join the opening of a new public dog run in North Brooklyn at Greenpoint Landing yesterday morning. Dog runs are essential for every neighborhood, and prior to this new run, dogs had been trekking over a mile to the nearest official spot. I’m pleased our local pups have a new space right on the waterfront.” said Councilmember Lincoln Restler

“I’m thrilled that Greenpointers and their four-legged friends have a new dog run to play, socialize and relax along our East River waterfront – and just in the time for the warm weather! People with companion animals make for great neighbors and I’m grateful we’re doing more to create space for them in North Brooklyn,” said Assemblymember Emily Gallagher, District 50.

“As the first dedicated public space for dogs in northern Greenpoint, this new run is an exciting first step in answering our community’s call to create more play spaces for our furry friends. With the explosion of a growing dog population since the pandemic started, we look to yesterday’s opening as a kick-off for a new network of dog runs coming to North Brooklyn,” said Katie Denny Horowitz, Executive Director, North Brooklyn Parks Alliance.

“We are thrilled to see another residential tower open, in addition to the dog run and additional waterfront open space that will be accessible to the public. This is yet another exciting milestone at Greenpoint Landing,” said Marian Klein, President, Park Tower Group.

“I am thrilled to join Brookfield and Park Tower, as well as Greenpointers and dog lovers everywhere, in cutting the ribbon on the new dog run at Greenpoint Landing,” said former Councilmember Stephen Levin .“This new amenity is years in the making and will give our community’s pups some much-needed space to run around.”

Park Tower Group is developing the master plan for Greenpoint Landing which, when complete, will include approximately 5,500 apartments (both market rate and permanently affordable units), a sprawling waterfront park designed by James Corner Field Operations and numerous local retail opportunities. Brookfield Properties and Park Tower Group opened One Blue Slip at the site together in 2018 and Two Blue Slip in 2020. Eagle + West, designed by OMA, features 745 mixed-income units and 8,600 SF of retail space, will be their fourth project together at the site opening this summer.

Handel Architects designed The Bellslip to pay homage to the manufacturing heritage of its context with a double-story gridded brick façade in a blend of three brick colors, but with a softer palette than its neighboring towers within Greenpoint Landing. Leong Leong, a minority-owned architecture firm and creative agency, designed the interior amenity spaces to create connections between the building and the neighborhood context. Modern textures and sculptural forms inhabit the project, including curved aluminum fin walls lining the lobby and pivoting walls that can be reconfigured for different events. A palette of deep greens, blues, and ebonies throughout the interiors draws upon the lush colors of the waterfront landscape. Art advisory group, The Commission Project, curated the selection of artwork that is displayed throughout The Bellslip. The collection consists of approximately 40 varied works by 15 different emerging artists – more than 50% of them from underrepresented communities.

For more information about The Bellslip, visit https://www.thebellslip.com/.