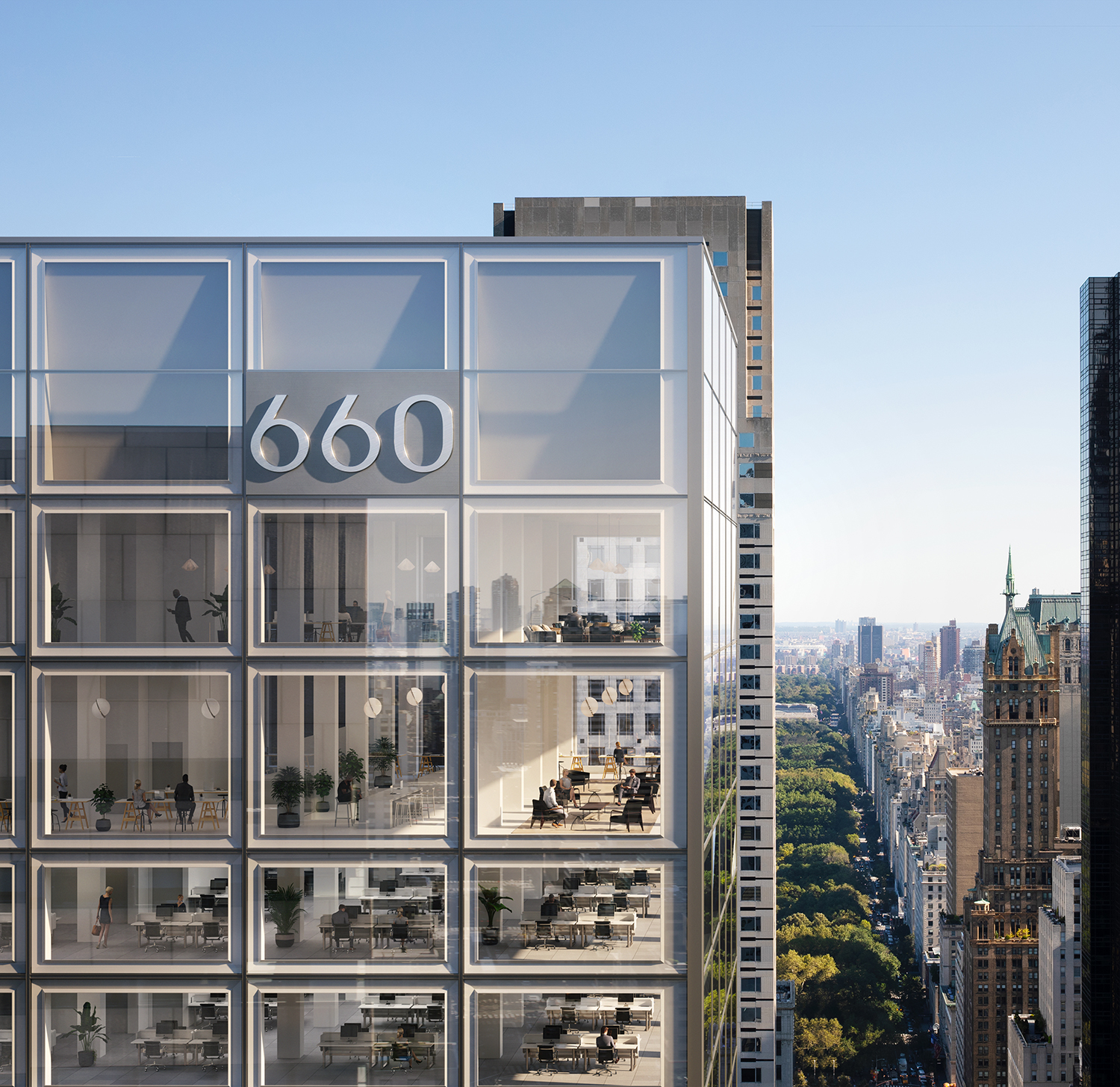 Brookfield Properties has released new renderings of its $400 million redevelopment of the office tower previously known as 666 Fifth Avenue and now called 660 Fifth.

Led by architect Kohn Pedersen Fox Associates, the overhaul of the 41-story skyscraper is expected to be completed in 2022.

“Brookfield is completely recladding the building with the largest unitized windows in North America, bringing in light and air to innovative new office spaces with expansive floorplates, and changing the way the building interacts with East Midtown at the ground level.

“Just like 5 Manhattan West, we believe this can be a model for how to preserve and upgrade our city’s existing office stock to create the best-in-class spaces that companies are looking for.”

Brookfield signed a 99-lease for the building in 2018, paying owner Kushner Companies $1.286 million.  It spent another $22.7 million buying-out five different tenants in order to empty the building for a renovation similar to its work at 5 Manhattan West, which is now fully leased.

660 Fifth is getting a new state-of-the-art insulated glass façade and the largest unitized windows in North America are replacing the small, low-light windows with large-format windows, nearly tripling the window area provided to the office space. These windows utilize the latest coating, allowing significant levels of visible light into the workspace.

Brookfield is completely reconstructing the lobby to provide a Class A entrance on 52nd Street that will incorporate an active retail amenity. There will also be new street-level retail along 52nd and 53rd Streets.

Exterior rooftop space is being created on the 8th, 10th, 11th and 15th floors for tenants to use and new double-height spaces and interconnected floors are being created. Elevators have been modernized and  heating and air systems upgrades will reduce the building’s energy consumption. Post-redevelopment, the building operating carbon emissions will be cut 54 percent.

The repositioning includes the opportunity for a tenant to have its name on the building.

“Our design, which takes advantage of 660’s unique structural challenges, will provide mullion-free floor-to-ceiling windows from column to column, nearly tripling the window area provided to the office space and maximizing daylight and views. Yet even more importantly, the design will dramatically improve the energy performance of the building. Altogether, these significant changes will transform 660 to look and feel like a whole new building.”

As an old building, 666 Fifth proved to be a curse for Kushner Companies after Jared Kushner paid a record $1.8 billion for the property in 2007. It was the biggest purchase the New Jersey-based Kushners had ever made and considered Jared’s signal of changes to come.  He moved his own offices to the tower after putting down $50 million in equity and borrowing the remaining $1.75 billion from a consortium of lenders.

But the company was never able to make enough from its rent roll to pay the interest on the loans. They sold a $525 million stake in the retail condo to a JV leading by Carlyle and Stanley Chera, but Kushner still had trouble paying the mortgage and stuck a deal with Vornado to half of the property, which was by now valued at just $820 million

Colony Capital founder Thomas J. Barrack Jr. later claimed Donald Trump, Jared Kushner’s father-in-law, personally called him to set up a meeting with Jared Kushner to invest $45 million in the building’s distressed debt. After failed efforts to strike deals with investors in Qatar, Saudi Arabia, South Korean and China and its own aborted renovation plan, Vornado ultimately sold its stake back to Kusher in 2018 for $120 million.