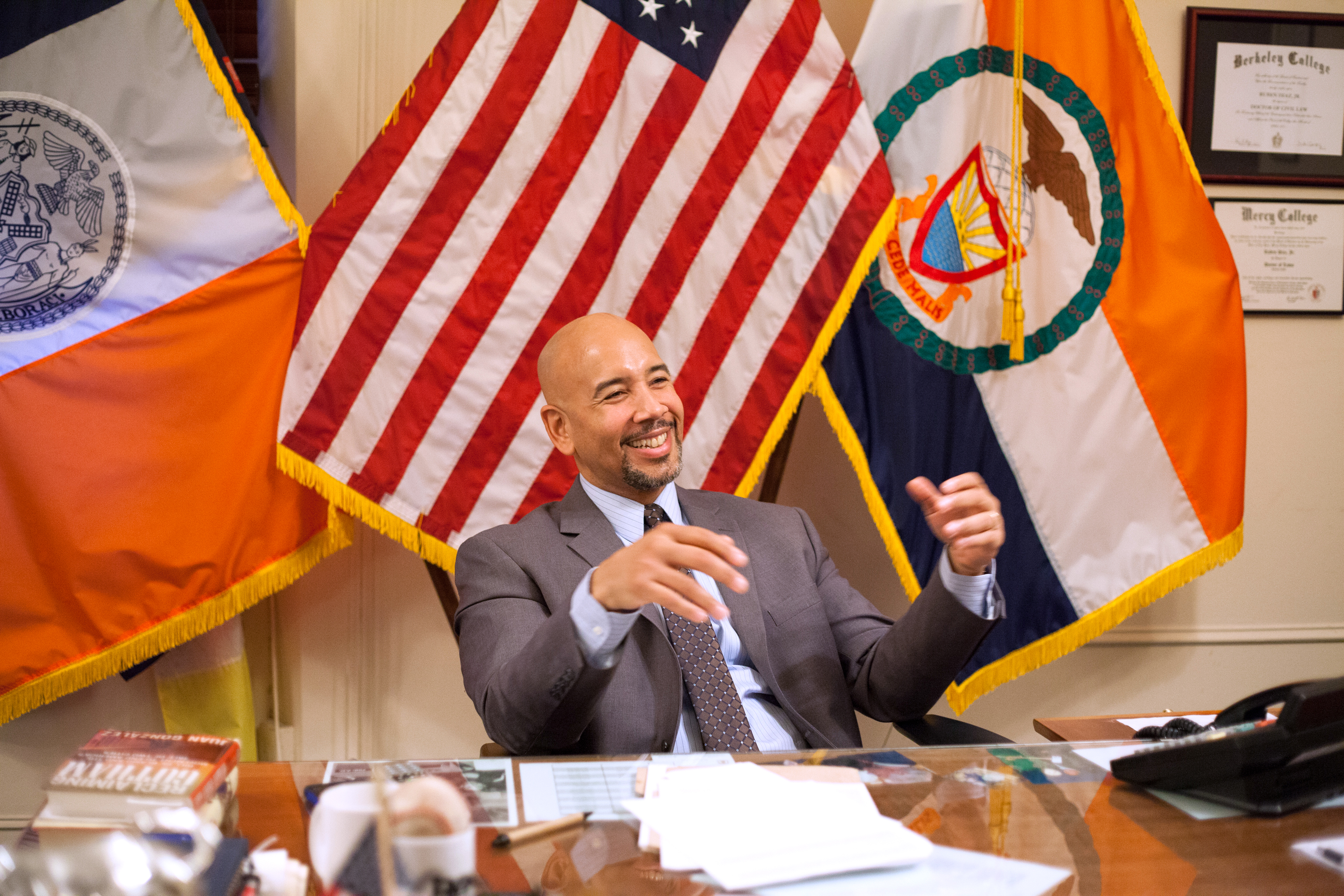 Ruben Diaz Jr. wants to tell you about the Bronx.

Since 2009, Diaz has served as the Bronx Borough President, a position that has earned him so many plaques and awards it’s become like wallpaper in the conference room of his offices at the Bronx County Courthouse.

As he enters his third and final term, he is committed to getting the word out that the Bronx is doing better than ever, and hoping the real estate world takes notice.

“We’ve done it through inviting people to the Bronx, speaking before the executive board at REBNY, going to the Building Congress, getting write-ups in papers, and going out there and unabashedly speaking about our renaissance and our turnaround,” said Diaz. “And challenging people to come.”

After hinting at a mayoral run at a New York Building Congress breakfast panel in October, Diaz told Real Estate Weekly he is “seriously considering” running for mayor once his last term is up in 2021.

“In 2021 I will be 48 years old and I will be elected 26 years of my life. I have no interest in running for any position other than to occupy city hall,” said Diaz, noting that he is looking to galvanize support from colleagues and New Yorkers while raising his public profile.
“If it’s good for the Bronx, its got to be good for New York City,” he said.

Diaz, born and raised in the Bronx by parents who immigrated from Puerto Rico, has spent half of his life in public service. He ran for Democratic District leader at the age of 21, dismayed that there wasn’t representation of young people in his neighborhood.

He was elected to the State Assembly at 23, the youngest person elected to the governmental body since Theodore Roosevelt. But it was after the death of Amadou Diallo, the African immigrant gunned down by police in 1999, that he began to truly tap into his passion for serving the public.

“I was in my second term, and that’s basically when I found my voice,” said Diaz, whose office was two blocks from where Diallo was killed. “I started growing in influence in the New York State Assembly.”

Though he’s a Junior — his father, Ruben Diaz, Sr. is a City Councilmember and former State Senator — Diaz actually has more years in politics than his father.

He lives in Soundview with his wife of 28-years, Hilda. The high school sweethearts have two sons — their oldest son is a graduate of Boston College and works in coding, while their youngest attends Temple University in Philadelphia.

More than anything, Diaz’s warm personality is something that could win him votes for public office. He has been elected Bronx Borough President with more than 85 percent of the vote in all three elections since 2009.

He is exceedingly proud of the statistics of the Bronx since he has taken office nearly a decade ago. Crime and unemployment rates have plummeted, while the number of jobs have soared.

Diaz wants to wipe away the bad reputation that has long dogged the borough since the 1970’s, when crime and poverty were at a high in New York City. He even persuaded an executive at HBO to take the notorious HBO documentary series “Hookers at the Point” out of rotation on the network.

“There aren’t even hookers at Hunts Point anymore,” he said. Instead, along with the world’s largest food distribution center, Hunts Point is the site of several new developments.

“When you look at the Bronx now, what a lot of people don’t realize is that a lot of the Bronx is still intact, it never burned down,” said Diaz. “Unfortunately, there were certain areas that received a bad reputation when you saw the burned down buildings, but the entirety of the Bronx suffered.”

Ron Moelis’ firm L+M Partners is among the first big developers to plan a large development along a waterfront area of the South Bronx. That project, Bronx Point, will have more than a thousand residential units, a hip-hop museum, a movie studio, and a food hall.

Diaz hopes the project will be the catalyst for more developments to rise along the development site, which includes 11 parcels of land.
The residential market has picked up too, with several market rate and affordable projects underway and thousands of residential units in the pipeline.

Diaz pitched the Bronx to Amazon for its new headquarters, and although he doesn’t expect the borough to be picked once Jeff Bezos makes his final decision, just being in the race was a huge step for the borough, Diaz said.

One of his biggest goals is creating waterfront accessibility that will connect neighborhoods.

“I think it would go a long way in creating an entire community and being able to have mixed-income housing units there, create jobs, and give life to a waterfront that is unfortunately not accessible to Bronxites and New Yorkers,” said Diaz of the area along the Harlem River he hopes to draw more development. “It’s going to happen,” he said.

The waterfront accessibility is part of a bigger dream that would see a contiguous waterfront greenway running from Van Cortlandt Park all the way to Randall’s Island, similar to the Hudson River Greenway that runs from Washington Heights to Battery Park.