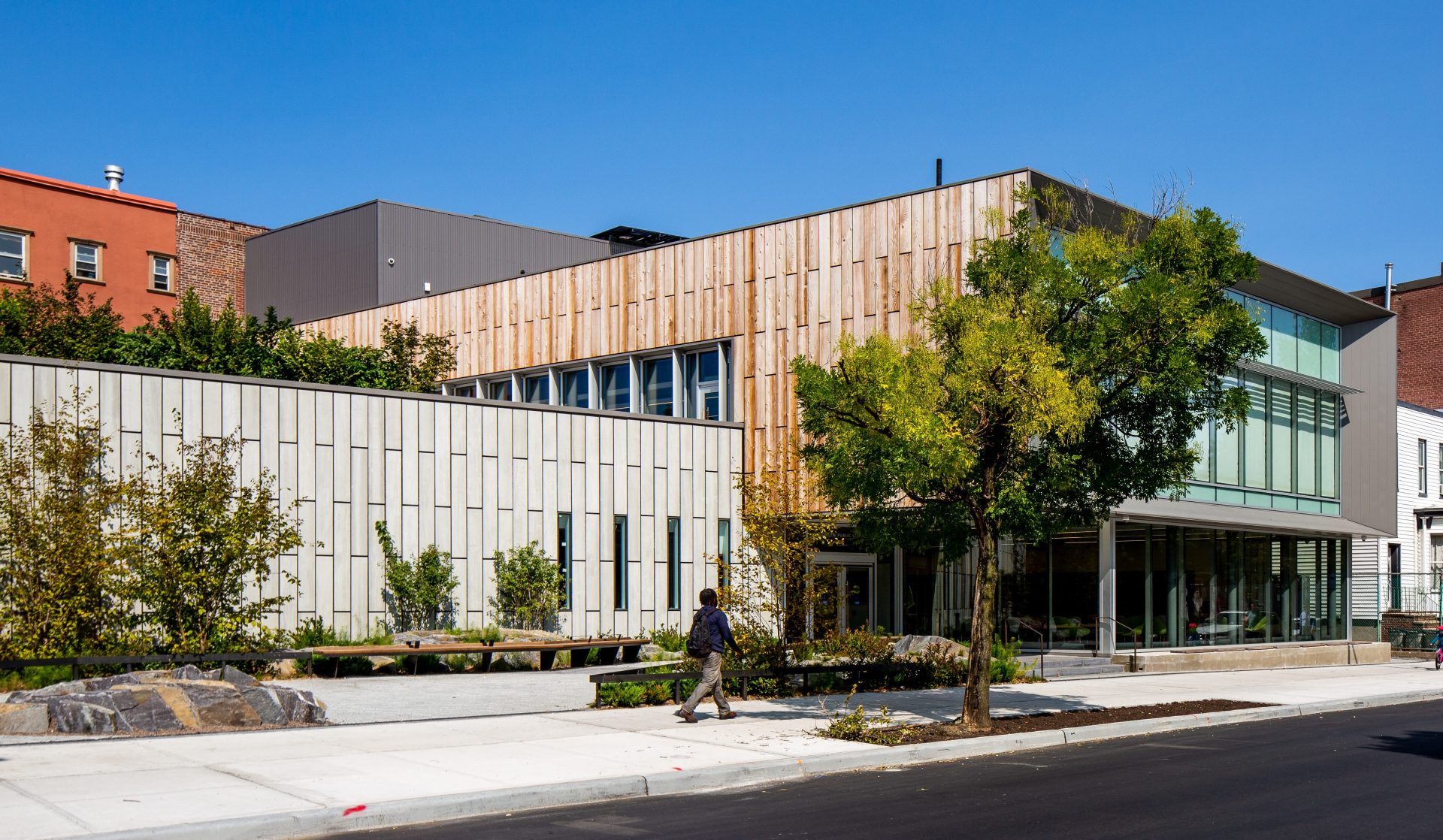 The new Greenpoint Library and Environmental Education Center is open for business, Brooklyn Public Library leadership announced today at a socially-distant celebration outside the branch.

Designed by Marble Fairbanks, with landscaping by SCAPE, the library is twice the size of the previous branch, encompassing more than 15,000 S/F with significantly enlarged indoor and outdoor spaces for both everyday library services and expanded activities for the exploration of the environment.

Although the Coronavirus has initially limited the library to grab-and-go service, the opening of the branch to patrons nonetheless represents a major milestone in BPL’s effort to redevelop or revitalize a third of its branches, as part of the largest slate of rebuilding Brooklyn’s libraries since the Carnegie era.

“With the help of our partners, from the Greenpoint Community Environmental Fund to Marble Fairbanks, we created a space for everyone in the community that is as inspiring as it is versatile. In 2020, in Brooklyn and beyond, we need more libraries like this one: that make vital knowledge and beautiful design accessible to all, that empower people from all walks of life to come together and build a more sustainable, more just world.”

Mayor Bill de Blasio added, “The Greenpoint Library and Environmental Education Center will be more than an essential free, high-quality resource for families – it will be a bulwark in our fight against climate change and an anchor for this iconic neighborhood for years to come.”

The new building – which is targeting LEED Platinum certification – represents the most modern thinking about the way that libraries are used by patrons today with flexible spaces that can be used for solo study, small group work or larger meetings; enough electrical outlets and laptop space for tech-enabled work; and even a dedicated space for teens, whose needs were under-met in previous decades with the traditional library layout of children’s reading rooms and adult spaces.

The physical space itself–which is replete with details that bring the natural world to patrons’ fingertips – will serve as a teaching tool:

Other environmental elements of the building include energy-efficient lighting, including LED lights and light sensors on the lower level; use of energy-efficient glazing, solar shading devices, well-insulated enclosure panels and materials; use of sustainable, durable interior finishes with low VOC emissions and high non-toxic recycled content; and reduction of indoor and outdoor water consumption by using only WaterSense label low-flow plumbing fixtures.

Developed as a unique community partnership, the Greenpoint Library and Environmental Education Center is also a key example of how libraries are using creative funding mechanisms to deliver libraries whose resources are catered to local communities:

In Sunset Park, BPL is working with the Fifth Avenue Committee to deliver a modern branch nearly twice the size of the previous one, with enough family space and multilingual materials for one of the busiest branches in the system, as well as affordable housing for local residents and survivors of domestic violence;

In Crown Heights, the library is partnering with the Brooklyn Children’s Museum to move its Brower Park branch, to the Museum – helping to supplement BCM’s existing educational efforts for Brooklyn’s children.