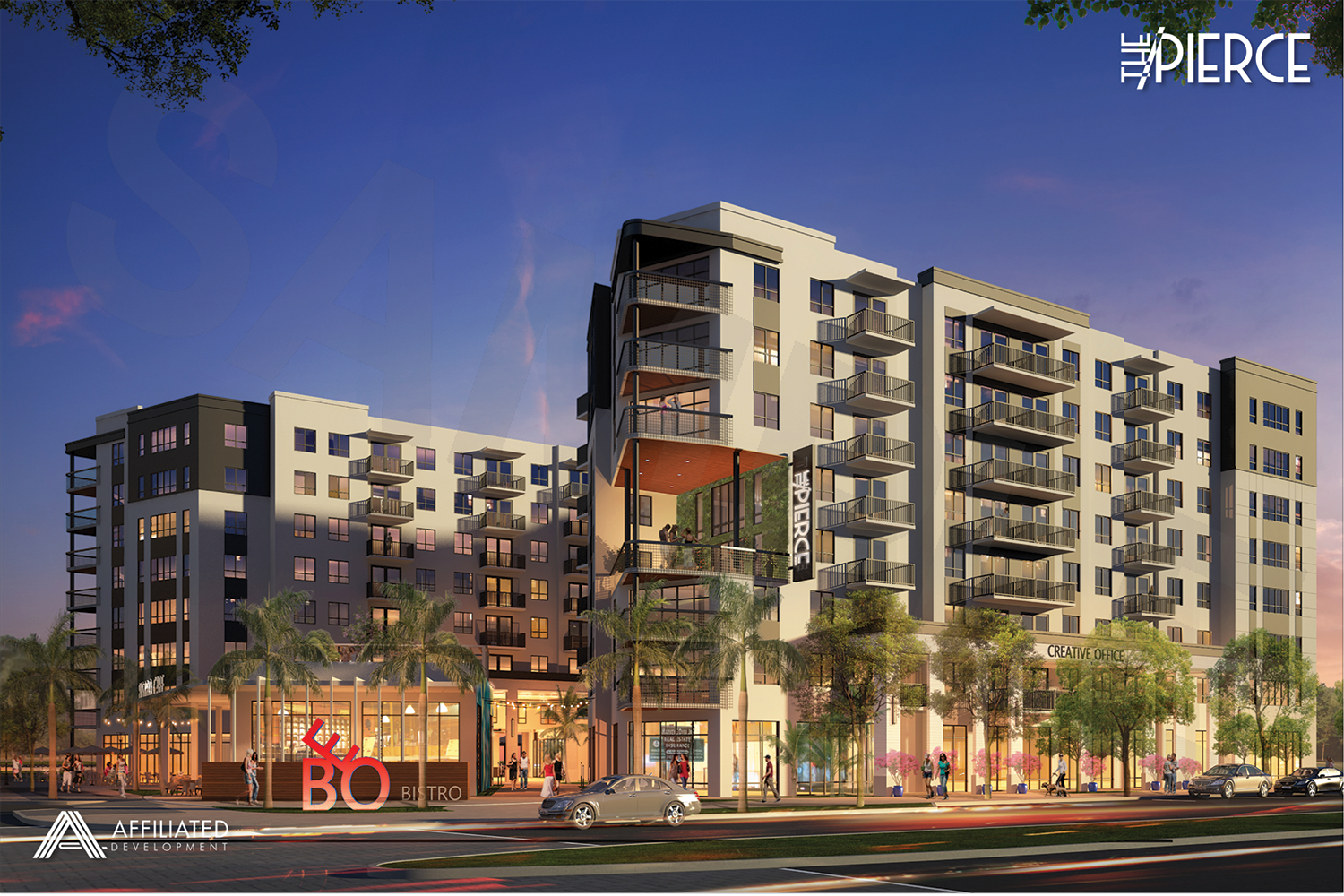 Located in west of Federal Highway between Ocean Avenue and Boynton Beach Boulevard, The Pierce will offer 16,800 square feet of restaurant and commercial space, a minimum of 236 apartment units and a parking garage that will include 150 public parking spaces. Affiliated Development was the only proposer that had an agreement with longtime Boynton Beach restaurant, Hurricane Alley, which secured the business’ future in Boynton Beach.

Fort Lauderdale-based Affiliated Development outbid 4 other firms that responded to a RFP in Decemeber 2021 issued by the Boynton Beach CRA, including Related Group. Negotiations have been ongoing since that time and all agreements have been finalized and approved by the CRA Board and City Commission.

“We are community builders and have a track record of working alongside our City and CRA partners to create a transformative projects that increase the quality of life for the city’s residents,” says Jeff Burns, CEO of Affiliated Development. “We have had our eye on Boynton Beach for a while and strongly believe that Boynton Beach is poised to reach its full potential.”

With housing affordability at unprecedented levels, The Pierce will offer 50% of the project’s units at varying workforce housing levels in order to accommodate the overwhelming demand for Class A living at attainable rents. The Pierce’s 8-story apartment building will offer luxury finishes, features and amenities including a resort style pool with private cabanas, state of the art fitness facility, co-work collective and keyless Bluetooth door entry.  The Pierce will be built and certified to national green building standards.

Boynton Beach leaders have been setting the stage for this moment for many years. The CRA had assembled over 2 acres of property and received many unsolicited suiters over the years.  Instead of moving forward with those proposals, the CRA underwent a competitive process that not only vetted the merits of the project, but the strength of the developer. Affiliated Development specializes in public-private-partnership development and has several completed projects in Broward and Palm Beach Counties.

Affiliated Development’s next step is to begin the land use entitlement process.  “If all goes smoothly, we anticipate getting underway during the mid 2023,” says Burns.

Affiliated Development (“Affiliated”) is a regional real estate development and investment company headquartered in Fort Lauderdale, Florida with offices in West Palm Beach, FL. Affiliated specializes in mixed-use multifamily ground-up development and has created a niche in working with local government to help bring about redevelopment and construct workforce housing. The company was formed as a mission-based organization with the goal of building mixed-use multifamily developments to target unmet demand and underserved areas within the market. Affiliated works directly with communities to improve the quality and sustainability of housing stock for residents, resulting in the development of Class A luxury apartments at attainable rates.

In December 2020, Affiliated Development announced the successful closing of their $125 million housing impact fund to capitalize the company’s projects and tackle the region’s workforce housing crisis, largely comprised of local public pension plans. Affiliated Development has found a niche in public-private-partnership development and have over one-thousand workforce units in the pipeline throughout South Florida.Affiliated Development has over 1,200 units planned or under construction in Palm Beach County and several projects in Broward County, including The Tropic, an 18-story, 223-unit mixed-income workforce housing project located off of Young’s Circle in downtown Hollywood.  That project is slated to get underway this fall.