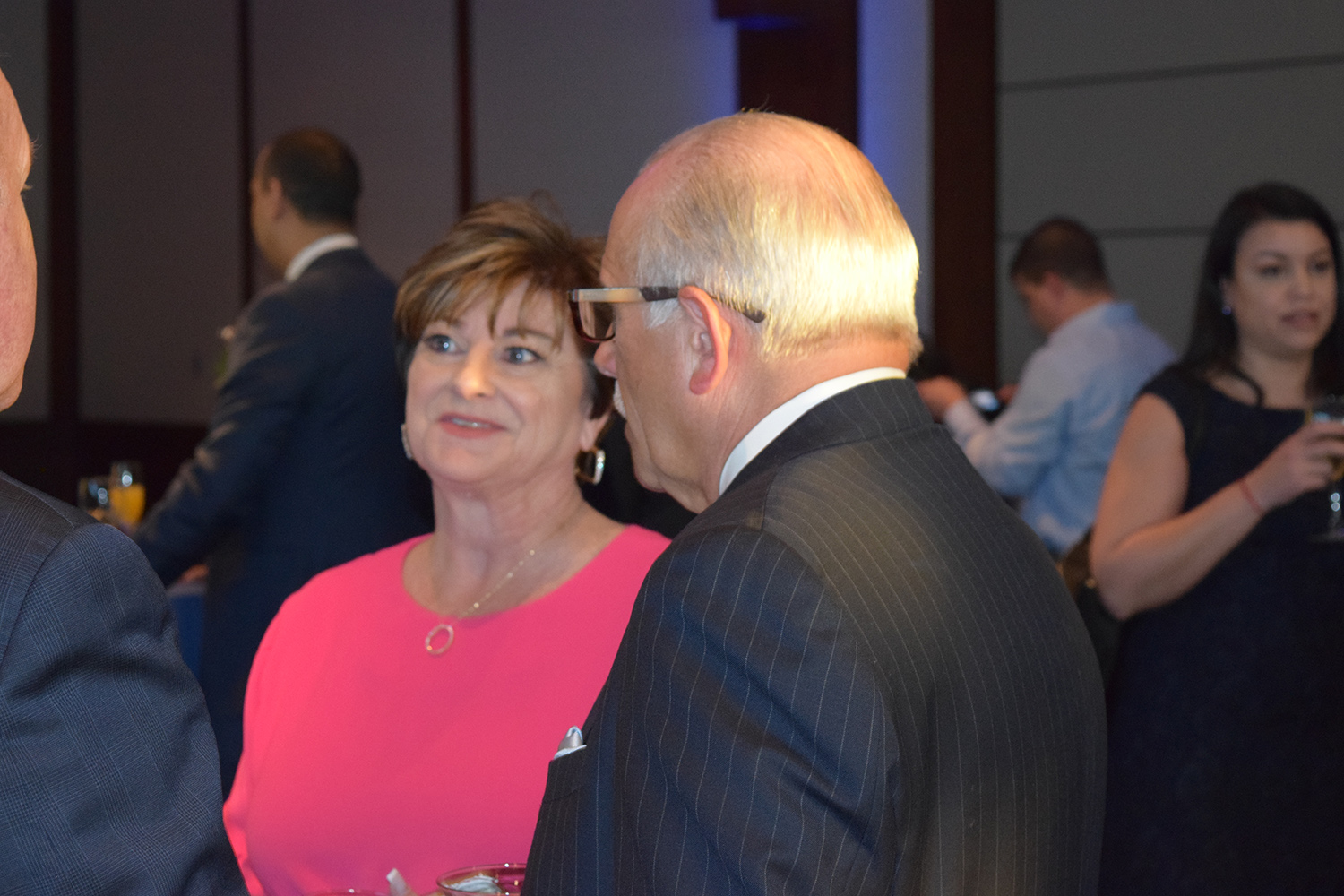 “I was going to be running the golf outing, after all,” recalled McGowan. “My husband Paul thought it would be helpful if I knew the game since that was where the business got done.”

That was 1989, and while McGowan is now an accomplished golfer, her views on getting deals done on the green have changed just as dramatically as her swing.

“I don’t think there are too many deals done on the golf course these days,” she said. “Companies operate in very different ways and there are a lot of protocols and procedures that need to be followed within any organization when it comes to doing business.

“There is no doubt, though, that the game still facilitates the networking that our members enjoy and need to exchange information and develop professional contacts. There still may be a few deals done, but it’s not like it used to be.”

Golf course wheeling and dealing isn’t the only thing that’s changed since McGowan joined BOMA-NY as its membership director. Over the past 30 years, she has watched membership mushroom to more than 750 building owners, managers, architects, engineers, systems consultants and contract services providers in construction, elevator maintenance, cleaning services and other disciplines. Altogether, BOMA-NY members are responsible for some 400 million square feet of space, including some of the world’s most prestigious properties.

When she started, McGowan reckons 90 percent of BOMA-NY members were men from a sector of the real estate industry where fuel oil and waste management didn’t tend to attract the fairer sex.

“When I started, you wouldn’t see too many women,” McGowan admitted. “But this year, we have more women than ever in our history serving on our board of directors.

“I think there have been a variety of factors that have driven this change, one of the biggest has been the changing role of the manager and the type of properties they operate. Some of our members are responsible for millions of square feet of commercial space, overseeing everything from the physical structural services, such as fire alarm systems and elevators, to human-sourced services that include cleaning and waste management.

“We call the managers the mayors of small cities. In each property, they deal with everything from transportation, which is the elevators and escalators, to the citizens, who are their tenants. The police force is security and public works is maintenance.

“Asset management is something that has also contributed to the change in the make-up of our membership and more young people and women look at it as a viable career option.”

McGowan admits she never envisioned herself immersed in the world of building management 30 years ago either.

Married to Paul and raising their daughter, Kelly, in Valley Stream, Long Island, she commuted to Manhattan every day to a job in the internal auditing department of the Equitable Life Insurance Company.

She joked that it was her love of chocolate that got her into the business. “When you commute every day, you see the same people and you get to know each other. I used to make chocolate and sell it to my colleagues at Equitable. A woman I had become friends with saw me bringing a big box of chocolates onto the train one Valentine’s Day and she admired it. When I told her that it was a little side business, she asked me to make some for her mother. I made her a dozen long-stemmed chocolate roses and she and her mother loved them.”

So much so, that the woman asked her to make 100 more. “After I picked myself up off the floor – I’d never made that many before – I said yes, I’d love to.”

It turned out that woman was Julie Gibouleau and she was the executive director of BOMA-NY.

“She said her organization was having an event and could I make chocolates to give out to the female attendees,” recalled McGowan.

“Everyone at the event loved them, and when her association was having a golf outing next, she asked me to make something else for people attending that. Before long, I was at all these meetings handing out my home-made chocolate.”

Several months into their joint venture, Gibouleau told her about an opening at the association for a membership director. “At the time, we couldn’t really make the numbers work,” said McGowan, “so I stayed at Equitable and kept making the chocolate for the different events.”

When the position became available again, McGowan said, “I came down a little and Julie came up a little and we met in the middle. Now I’ve been here 30 years.”

When Gibouleau died in 1992, BOMA-NY’s incoming chairman Peter L. DiCapua, then a manager with ATCO Properties, hired McGowan to replace her. She said there was plenty to keep her busy in these early years.

“We always had certain programs in place, monthly luncheons, networking events, but in addition to the owner/manager members we had two additional tiers of membership – the allied members, who were the vendors, and professional members, who include architects, engineers, designers, consultants. Each group would hold their own exclusive events, with both groups inviting managers and owners to attend their events.

Since they’re all members of the same organization and they all had the common goal of networking with the owner and manager members, it made sense to combine the two events into one large event, now known as the Annual Membership Event. This event attracts more than 500 people representing all sectors of commercial real estate.

The next big change was in the way the organization celebrated its most accomplished members, changing the annual Awards of Excellence Luncheon to the Pinnacles Gala, an event that now attracts some 900 guests for a swanky evening that showcases the work of those operating at the highest levels of their craft. The winners go on to compete in regional and national competitions to find the best operators in the industry.

“The Pinnacle is the New York competition of the TOBY (The Building of the Year) Awards of BOMA International and is the highest award given to owners and managers in the commercial real estate industry,” said McGowan. “Every year, the competition grows and we are very proud of the way it has contributed to building not just better management teams, but the quality of New York’s buildings overall.”

McGowan also played a major role in one of the biggest shake-ups at BOMA-NY, and that was transferring the professional accreditation of members from NYU in-house. She explained, “Back then, everything was done by volunteers and our members wanted specialized education, training and networking with people they could do business with. Our members met with BOMA International and we began to work with members from all over the country and formed the basis of what became the BOMI Institute, the educational part of BOMA that now provides the RPA, FMA and SMA designations.

“We brought the education of our members in-house and developed standards of excellence, covering everything from operations and asset management to facilities and real estate investment and finance, environmental health and safety.”

During the ensuing years, the organization would see just two female presidents, the first being Hannah Nakhshab, manager for 650 Fifth Company, in 1997. “We didn’t have another female president until 2004 when Betsy Jacobs, of Vanderbilt YMCA, was elected,” said McGowan.

The process of achieving board membership means it could be several years before BOMA-NY has another female president. “It definitely takes a lot of commitment on a member’s part to reach that level,” explained McGowan, noting that new members seeking higher office are required to serve on various committees before they can be nominated for a directorship which could ultimately lead to the chairman’s seat.

“Our members definitely have to work their way up the ranks, but the board is definitely progressive in its views towards nurturing our young members, many of whom are now women,” she said. “It is very visible, now more than ever. We have more women members and they are achieving more leadership roles in their companies and see BOMA as a pro-active way to further their professional career. That’s evident from the number of women who will be filling various positions within the committee structure this year.”

McGowan pointed to the 2019 Outstanding Member of the Year Pinnacle winner, Laura Belt-Ponomarev, as an example of the next generation of BOMA-NY leaders. “Laura’s father, John Belt, is a former BOMA-NY president, and when she started to work for his family firm, the first thing he told her was to join BOMA-NY and get her RPA. She went on to get her FMA and became involved in the codes and regulations committee.

“She has taken on advocacy roles and now gives testimony at City Hall hearings on issues that affect our members, such as the current commercial waste zones debate. She worked with [former president] Jim Kleeman re-writing the bylaws – and she did all of this while running her family business and having two babies.”

McGowan believes all of the structures and attitudes are in place within BOMA-NY to continue to diversify not just its membership, but its board.

In May, BOMA-NY will host the organization’s National Advisory Council for two days of business that will include a women-only luncheon.

McGowan said, “There has been a huge shift in the number of women now working in the building and asset management sector and that is being reflected within BOMA-NY’s ranks. Over the years, I was often the only woman in a room full of men but, I can honestly say, I never looked at it as a negative. I have a job to do and I believe it is respected. I’m the executive director, not the only woman in the room.

“I think that mentality is quite palpable within the organization now and BOMA-NY is actively working to make sure the next generation of leaders, be they male or female, continue to work to elevate the profession and become major influencers in our trade. As building managers, they know there is always work to be done, but we are confident in the knowledge that we have a strong foundation on which to continue to build.”

Hanes to consolidate at 260 Mad