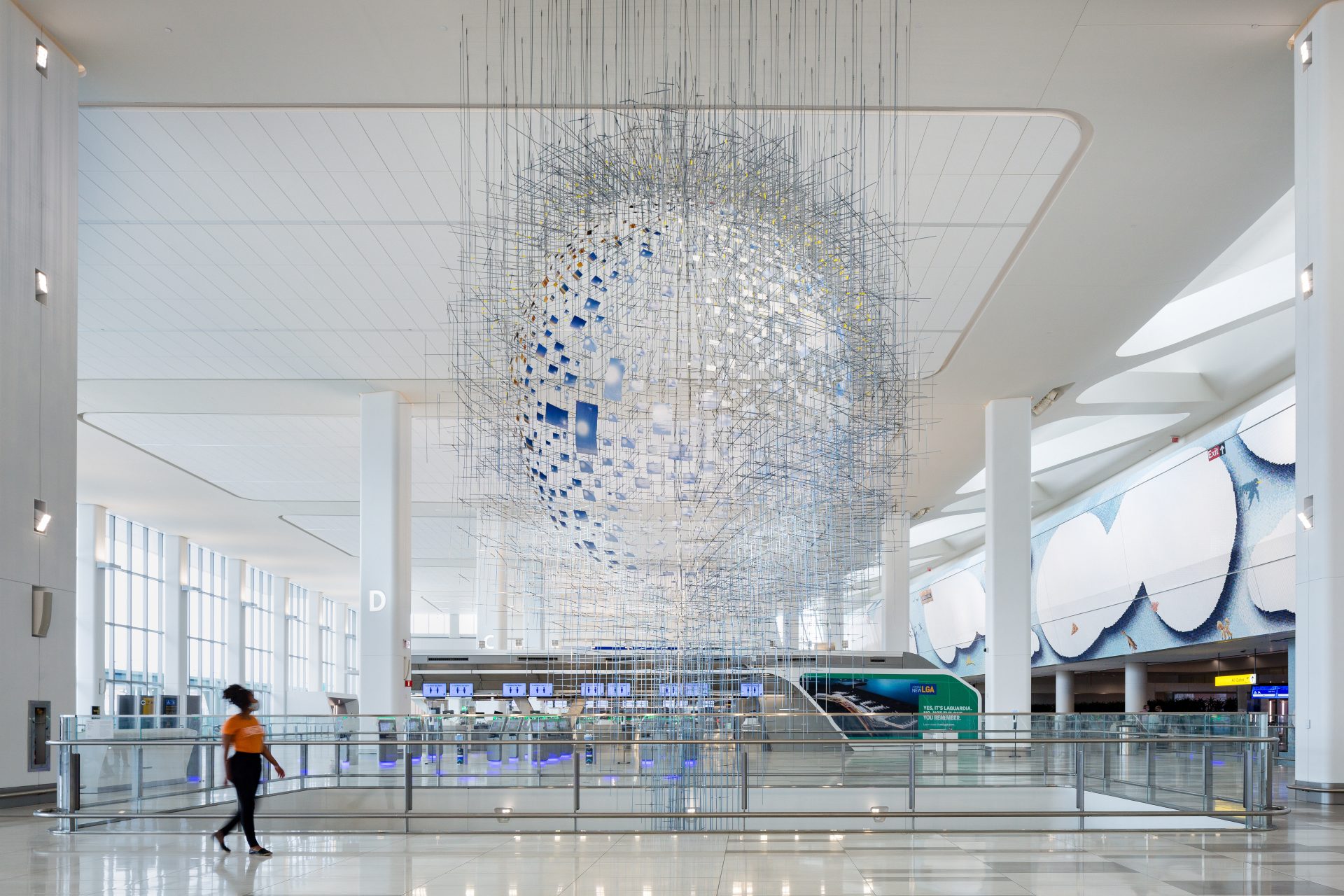 Governor Andrew Cuomo held his daily press briefing at LaGuardia Airport today to mark the opening of the newly renovated Terminal B arrival and department hall.

The facility in the Central Terminal has been under renovation, along with the rest of the airport, as part of an $8 billion, years-long project to update the airport.

“The opening of the new Arrivals and Departures Hall at Terminal B is the biggest milestone to date in the transformation of LaGuardia Airport into a world-class transportation hub that is worthy of New York State,” Governor Cuomo said.

“As we continue to upgrade and modernize this airport for the 21st century, this new state-of-the-art hall will offer passengers a unique travel experience with new concessions, traveler amenities and art installations by four of the world’s leading artists, while increasing space for passengers to move more safely and efficiently during and after the COVID-19 pandemic.”

Since the start of the pandemic, LaGuardia has seen is passenger numbers drop nearly 60 percent. The new halls will have  “advanced security protocols and COVID-19 safety protocols in place”

Skanska is the lead partner of the Skanska-Walsh Joint Venture responsible for the construction and design, in partnership with HOK and WSP, of the new Terminal B. Skanska is also a founding member of LaGuardia Gateway Partners, selected in 2015 by the Port Authority of New York and New Jersey to deliver and manage the redevelopment.

“Today is a special day for Skanska as we celebrate the most significant milestone yet on our largest-ever project – the LaGuardia Airport that New Yorkers deserve,” said Richard Kennedy, President and CEO, Skanska USA.

“We’re grateful for this once-in-a-lifetime opportunity to reimagine LaGuardia from the ground up, and for the thousands of employees, subcontractors and trades who logged millions of hours helping us realize this vision.”

The four-story hall offers 850,000 s/f an open floor plan with 60-foot tall ceilings and a glass façade. The fourth-floor features shops, restaurants and other customer amenities, and concourse bridges.

Rick Cotton, Executive Director, Port Authority of New York and New Jersey, said the opening should be “a shining symbol of the region’s potential for a strong economic recovery with the vitality of New York before COVID-19.”

The redevelopment at one of the nation’s busiest airports began in 2016 and is the largest public-private-partnership (P3) in U.S. aviation history and one of the most complex projects ever undertaken by Skanska.

Through collaboration with the Port Authority and other stakeholders, Skanska developed a multi-phase construction plan that allowed for the ground-up construction of a brand-new terminal on a small geographic footprint, all without disrupting operations of the existing facility.

Under this plan, old facilities are demolished only as new facilities are completed to ensure the airport – which handled a record 31 million passengers in 2019 – never loses capacity. For example, the new Headhouse sits in the footprint of what was the old P2 Parking Garage. To make room for the Headhouse, Skanska first constructed a new, seven-story Terminal B Parking Garage – which opened in February 2018 – allowing for the demolition of the old facility.

The most recent milestone in the redevelopment was the completion of the Terminal B Eastern Concourse. The Eastern Concourse opened to the public in December 2018 and houses a total of 18 gates with modern customer amenities, state-of-the-art architecture, and more spacious gate areas. The second new concourse is currently under construction and will bring Terminal B’s overall capacity to 35 gates upon completion.

Dual pedestrian bridges will connect the Headhouse to Terminal B’s two island concourses. The Eastern Concourse Pedestrian Bridge that opens today is approximately 420 feet long and elevated 65 feet above the ground. Skanska and the design joint-venture HOK and WSP designed these bridges to span active aircraft taxi lanes underneath – frequent bottlenecks under the old airport design – which will improve aircraft taxi circulation and ultimately help reduce traveler delays. Once both terminals are completed, LaGuardia will be the first U.S. airport to feature two of these innovative pedestrian bridges.

The new Terminal B baggage handling system stretches over seven miles, with approximately two miles of corresponding walkways, and powered by 1,200 individual motors designed to switch off when not in use to reduce energy consumption. The baggage claim system runs through the walls and the ceilings, a construction feat equivalent to building a rollercoaster in a closet.

In preparation for the overnight transition from old terminal to new terminal, roadway logistics require the deactivation and demolition of the old Central Terminal Building incoming flyover bridge to launch a 216 foot, two lane temporary bridge carrying vehicles into the arrivals level. Following the Headhouse opening day, the team will then complete the balance of the arrivals level construction under the temporary bridge by year end. The project is slated to complete by the fall of 2022.

In July 2018, Skanska opened its first new flyover roadway to LaGuardia from the Grand Central Parkway’s Eastbound Exit 7, the primary roadway or overpass for vehicles accessing the airport, which greatly improved traffic flow and congestion.

CBRE set to shake things up with Salt Suite expansion