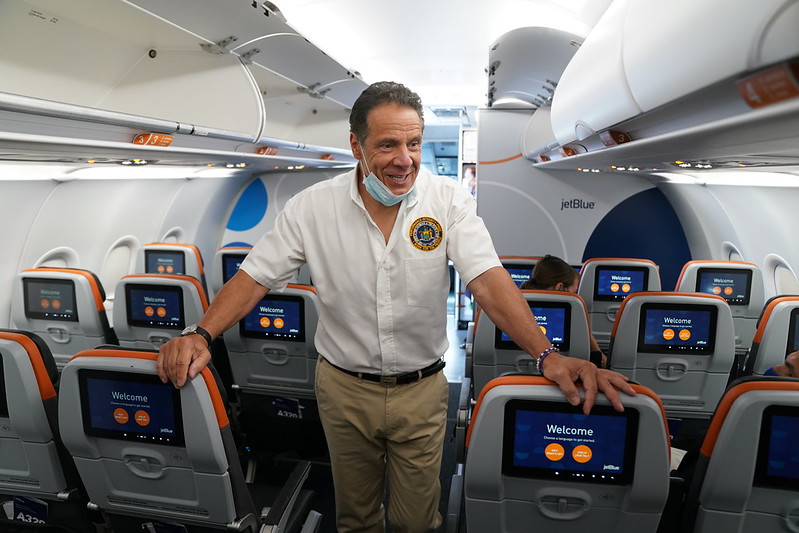 “I want all New Yorkers to be on high alert. The virus is spreading. It’s all across the country. It’s getting worse and it will have an effect on New York,” said the governor, who’s been lauded for his handling of the crisis and flew to Georgia this morning to help that state devise a battle plan as numbers there surge (picture top).

Eight people died from COVID-19 in New York State on Sunday and the hospitalization rate reach 716, the lowest numbers since the crisis began 142 days ago.

The numbers were good enough to allow the Phase 4 reopening to get underway, low-risk outdoor activities and entertainment at 33 percent capacity, outdoor professional sports without fans, media production and the reopening of schools under strict guidelines.

Courts, cultural institutions, indoor dining and malls remain in lockdown though, as the city monitors the situation across the US where Cuomo blamed hasty re-openings and lack of Federal direction for the new outbreaks.

“The second wave is being created by the negligence of our government,” said Cuomo. “We knew what needed to be done to stop the virus. New Yorkers did it.

In a let to Governor Andrew Cuomo, Mayor Bill de Blasio, and New York City Council Speaker Corey Johnson Association chairman, Robert Benfatto said, “The city and state must find ways to stimulate commercial activity or we will continue to lose businesses and jobs at an alarming rate. Our action plan offers a set of steps our government can take to stem the current financial freefall.”

Benfatto said the plan is designed to enable businesses, especially retail stores and restaurants, to restore their vitality and thereby speed up the city’s recovery. The plan includes rent and mortgage relief, an expansion of the Open Restaurants program to other storefront businesses, streamlining State Liquor Authority’s procedures and an activation of sales tax exemptions.

The NYC BID Association represents 76 commercial districts in every borough where more than 93,000 business are located. Each member BID provides enhanced services such as security, sanitation, marketing, and streetscapes elements.