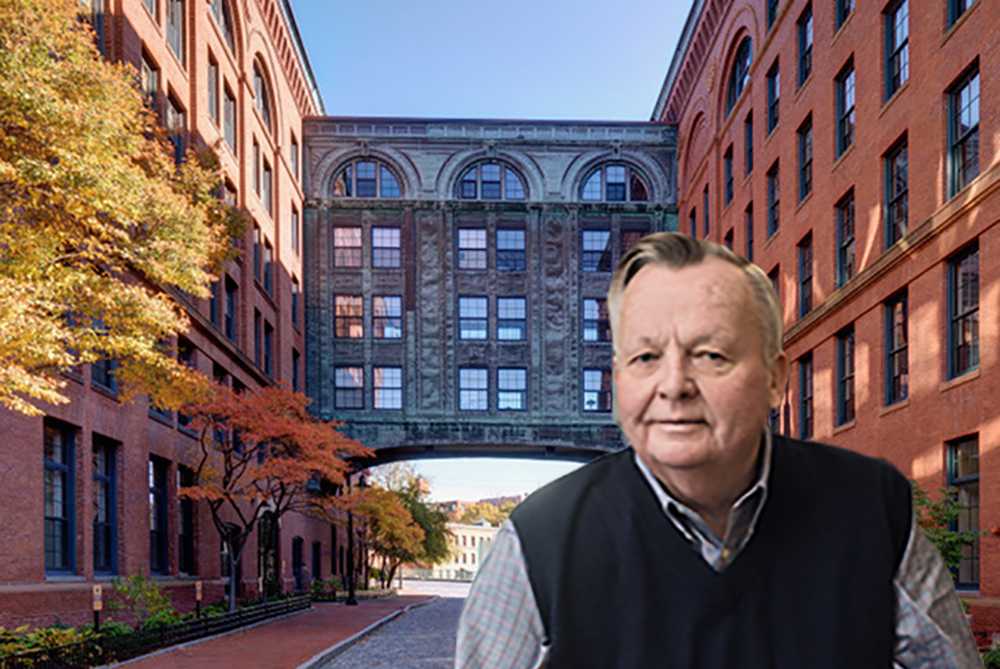 Robert J. Verrier, FAIA, NCARB, the Boston-area architect and firm founder whose reinventions of historic New England wharfs, mill buildings, schools, and architectural landmarks have inspired national attention along with hundreds of emerging practitioners, died on August 23 in Gloucester, Massachusetts while on vacation with his family. He was 81.

A rehabilitated chocolate factory complex that ignited a revival of Dorchester. An abandoned hospital that became a magnet for retired seniors. A landmark 1800’s cotton mill re-imagined as a mixed-use village with offices, apartments, and a National Park Museum. These were just a few of the 100-plus building projects and adaptations led by Verrier as an influential yet unassuming architect and founder of The Architectural Team (TAT), headquartered in an 1840’s Naval commandant’s house on Admiral’s Hill on Chelsea’s waterfront.

Verrier inspired generations of architects with a steadfast belief in the potential of architecture to engender civic pride, revive local economies, and transform communities. Perhaps more importantly, he believed that people were capable of extraordinary things – and he actively encouraged those around him to dream big and pursue their highest potential by taking on more than they thought was possible.

A consummate optimist, and engaging storyteller, Verrier will be remembered most as a devoted husband, loving father, and loyal friend. The only thing that eclipsed Verrier’s passion for architecture was his love of family.

He is survived by his wife Carmen Rios Verrier of Lexington, MA; and his three children: Lita M. Verrier of Bedford, MA, partner Rick Eisenhauer, Jr., and her two sons Tristan Hart and Tobin Hart; Maria A. Verrier of Concord, MA., and her daughters Kira Moran and Alicia Moran; and Carlos E. Verrier of Topsfield, MA, and his wife Deborah Tian Verrier, and their two children Isabel Verrier and Lucas Verrier.

If few outsiders knew of Verrier’s national record of achievements or his success in building a widely acclaimed firm, it was likely due to his down-to-earth character.

He earned more than 50 honors, including a National Historic Preservation Award bestowed by President Ronald Reagan in 1988, and he became a Fellow of the American Institute of Architects, its highest recognition, in 2011. In fact, his influence can be seen on nearly every city block in Boston, from the Kenmore Abbey and Somerset Apartments, to China Trade Center, RH Stearns, and The Bedford Building, to Lincoln Wharf and Commercial Wharf – to name just a few. In the housing, preservation, and real estate communities, where Verrier’s expertise was deeply valued, his involvement in construction projects was considered a sign of seriousness and commitment, as well as technical and design excellence.

Verrier has also been commended for his support of the Boston Architectural College, where he studied and later in life served as a trustee. He supported the Planning Office for Urban Affairs (POUA), part of the Archdiocese of Boston, to find innovative solutions for affordable, workforce, and permanent supportive housing. In 2010, Habitat for Humanity of Greater Boston presented Verrier with their American Dream Award in honor of his contributions to the improvement of the Greater Boston community. Verrier’s love of old buildings and his passion for the preservation of historic fabric, overlapped with his devotion to the mission of creating quality affordable, safe, and attractive housing for those in most need.

Born in North Attleboro, MA, to Edward and Agnes Verrier, Bob Verrier attended Monsenior Coyle High School in Taunton and graduated from Boston Architectural College (BAC). In 2007, the BAC honored Verrier with their prestigious Alumni in Practice Award, which celebrates those that make the world a better place to work, live and learn.

In his early 30’s, Verrier had begun exploring how architecture practice and adaptive reuse techniques could be a way to restore local landmarks for the benefit of varied communities. Through professional leadership, Verrier promoted the safeguarding and use of our nation’s architectural historic buildings as a civic touchtone, a key to urban revitalization, and a living record of shared history.

By 1971, Verrier had joined three others to found the firm, originally named Boston Architectural Team. In the 1990’s, Verrier’s firm expanded nationally in multiple states in the Northeast. By 2000, The Architectural Team, increasingly known by its acronym TAT, grew to employ 95 people.

An exemplary leader in his field, Verrier was personally responsible for designing 100-plus award-winning historic buildings, and he was a registered architect in 27 states. His work has become a hallmark of the firm’s practice since its inception and has led to the firm’s foundation of lifetime clients.

The firm celebrated its 50th anniversary this year, having completed more than 155,000 units of housing, adapting over 300 historic developments, and receiving at least 200 awards for design excellence.

Verrier’s entrepreneurial spirit, dedication to helping others, and commitment to positive transformation will be carried on by his children, grandchildren, and the extended TAT family.

The switch has been turned back on