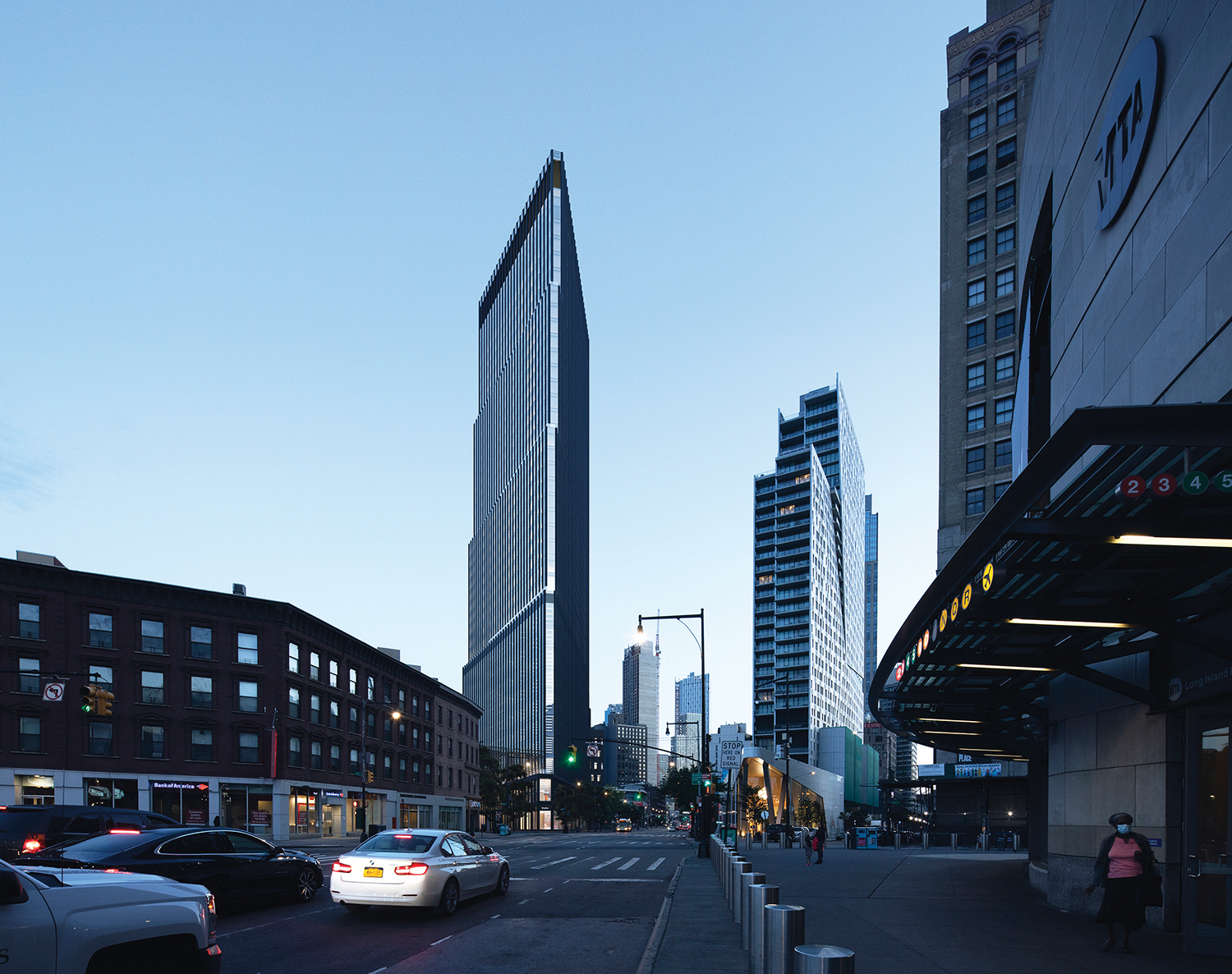 Alloy Development (Alloy) today announced plans to power the city’s first electric residential tower with 100 percent renewable energy. The Brooklyn-based firm recently issued a Request for Proposals (RFP) that seeks to partner with a community solar developer to enroll 100 Flatbush, the mixed-use tower now rising in Downtown Brooklyn, in community solar projects that will secure a 100 percent renewable energy supply for the building. The 44-story project is part of the first phase of the Alloy Block, a mixed-use development that will comprise five old and new buildings and will provide residential, office, cultural and retail space, as well as the city’s first two public schools designed to meet Passive House compliance. Construction of 100 Flatbush, which Alloy also designed, recently reached the halfway point and is expected to be complete in 2024. Local green energy non-profit Solar One is advising Alloy on the RFP through its Here Comes Solar program.

The issuance of the RFP comes just weeks after the New York City Department of Buildings released rules around compliance with Local Law 97, confirming that developers can comply with the law through off-site solar programs. Alloy is the first developer to pursue such a program following the rule issuance. Local Law 97 was passed in 2019 and requires developers to achieve carbon neutrality by 2050 through the meeting of certain energy and greenhouse gas emission limits by 2024 and even stricter standards by 2030. To achieve carbon neutrality for the Alloy Block, Alloy is seeking a developer with large-scale community solar or storage projects that will be constructed within the next two years. Alloy is also looking to enroll two condominium projects it developed and designed in DUMBO, Brooklyn – One John Street and 168 Plymouth Street – in the program. Projects located in New York City are preferred but the area of consideration extends to all of Con Edison’s territory, including Westchester County.

“Everyone has a role to play in combating climate change — and developers are no exception,” said AJ Pires, President of Alloy Development. “For us, powering the city’s first all-electric skyscraper with local, renewable energy was the logical next step as we work to do our part in decarbonizing our City and making a building our residents will be proud to live in. We encourage others in the industry to join us.”

Alloy is setting a new standard for energy efficient building construction at 100 Flatbush. All functions within the building typically run by natural gas will be replaced to run off electricity. Residential units will feature induction cooktops and heat pump dryers and base-building systems like hot water heating and HVAC will be completely electric, eliminating carbon emissions from apartments and the overall building. These improvements, along with the community solar component, will ensure the building is carbon neutral upon completion. Similarly, the Alloy Block’s two schools designed by Architecture Research Office – the new Khalil Gibran International Academy and a public elementary school – will meet the rigorous standards for energy efficiency and indoor quality that qualify for Passive House certification – the first two public schools to do so in the city.

100 Flatbush will include 441 mixed-income residences and 30,000 square feet of retail space. The residential component will include 396 luxury rental apartments and 45 affordable residences, the latter of which Alloy is developing with Fifth Avenue Committee, a 40-year-old Brooklyn nonprofit community development corporation. Amenities for residents include a fitness center, flexible workspace, and a rooftop pool. The project’s second phase will comprise a 840-foot-tall residential, office and retail tower designed by Alloy that also includes a home for a local cultural institution, along with two preserved historic structures.

The Alloy Block is also a model of transit-oriented development, with over 500 parking spaces for bikes and no parking for cars. Located adjacent to Atlantic Terminal, the city’s second-largest transit hub, the Alloy Block is next to the Brooklyn Cultural District and Barclays Center, and bounded by Flatbush Avenue, Schermerhorn Street, Third Avenue and State Street. It was approved through the City’s Uniform Land Use Review Procedure in September 2018.