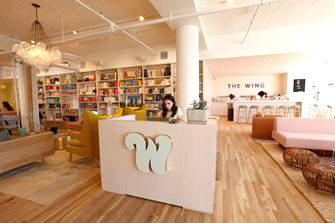 The Wing’s Dumbo location is slated to open in January 2018 and will offer new amenities for its members including the possibility of a Brooklyn-based café in its first-ever ground floor space.

“We are thrilled to welcome The Wing to one of the best street corners in Brooklyn,” said Jed Walentas, principal of Two Trees Management. “The Wing’s move to Dumbo’s 1 Main is further proof that the creative epicenter of the city is gravitating to the Brooklyn waterfront.”

“With a growing roster of existing and prospective members based in Brooklyn, opening a new location in Dumbo is an exciting next step in our growth as we create a modern work and community space for women across the city,” said The Wing Founder Audrey Gelman. “As a hub for creativity, innovation, and culture and some of the best views and public space in the city, Dumbo is the perfect fit for our next location.” At the corner of Main and Plymouth Streets and adjacent to Brooklyn Bridge Park, The Wing’s new 9,000 s/f ground floor space is the former home to Bubby’s Restaurant.

The space will be designed by Chiara de Rege & Hilary Koyfman and architect Alda Ly. Similar to its other locations, The Wing’s Brooklyn outpost will offer an open-plan workspace, meeting rooms, phone booths, a library, a lactation room, showers, and a beauty room.

The space will feature a custom Brooklyn wallpaper by illustrator Joana Avillez and wallpaper designers Flat Vernacular, both of whom are members of The Wing. In addition, it will offer three to five events each week ranging from panels on politics and current events to crafting and wellness. Notable Brooklyn-Based members include Tavi Gevinson, Zoe Kazan, Lena Dunham, Emma Straub, Lisa Price, and Aurora James.

The Wing currently has a total of 700 members and has 8,000 on the waitlist. The Dumbo location is expected to host approximately 1,200 members. The Wing was founded by Audrey Gelman and Lauren Kassan in 2016 with its flagship club in the Ladies Mile Historic District of Manhattan’s Flatiron neighborhood. The Wing will open its second location in SoHo this October.