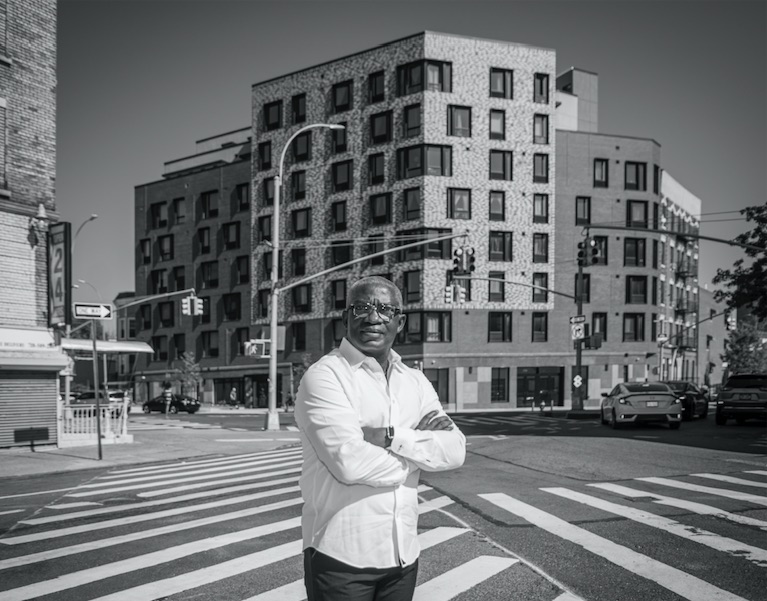 The New York chapter of the American Institute of Architects (AIA) has honored Victor Body-Lawson with its Leadership in Housing Award.

The architect, educator and artist known for community-driven designs for affordable housing, religious structures, mixed-use buildings and more, was recognized during the AIA Annual Meeting, during which the chapter also elected its 2022 leadership and celebrated their progress and direction.

A Nigerian native, Body-Lawson came to the US to study advertising but quickly switched to architecture  at the Catholic University of America in Washington, D.C. He attended graduate school at Columbia, where the late Max Bond was then the chair of the architecture division.

Bond, among the leading African American architects of his time, took the young Nigerian under his wing and hired the young graduate straight out of school in 1984.

He launched his own firm in 1993 with a commitment to changing the built environment through dialogue and creating a lasting impact on inner cities and neighborhoods, from his own Harlem to the coast of Ghana.

The impact of Body-Lawson’s work has included reinventions of affordable housing such as the 38-building, 1,340-unit Diego Beekman Houses in the Bronx (1998), which started with a bus tour of public housing for the residents.

Other works include new senior housing with teen community centers, creating multigenerational loci of activity, such as the recent Home Street Residences. His firm, BLA, is architect along with WXY architecture + urban design for the 740-unit La Peninsula mixed-use campus in the Bronx, now completing its first phase.

Body-Lawson’s significant impact in affordable housing alone includes over 3,000 homes including supportive, workforce, transitional and senior apartments. His work on houses of worship and commercial architecture has directly impacted thousands more community members in those neighborhoods, creating jobs and knitting together people and institutions.

Beyond these works, many located in the New York metro area, Body-Lawson has taught a generation of emerging architects as professor and critic from 1999 to today, totaling 600-plus students, bringing many of them to Ghana to share urban design ideas globally.

On the national stage, Body-Lawson has shared his expertise as a panelist on many programs and been applauded for his “humble architecture” and his specialty “in affordable housing, [executed] with balance, cadence, and attention to detail.”

As of this year, Body-Lawson joins the faculty of Columbia University and the Board of Trustees for the AIA New York State, furthering this influence.

Along the way, Body-Lawson has changed expectations for affordable housing, showing how to engage in innovative, valuable ways, such as exposing residents firsthand to how others live and inspiring them to work on improving their community directly, including by joining their new buildings’ own management staff. He has raised expectations for energy efficiency and sustainability, seen in his many LEED-certified buildings, the ample size of affordable units, the quality of materiality for their kitchens, bath and common areas, and above all, Body-Lawson’s prioritizing of spaces where residents and community members interact. Elements such as reclaimed African woods, reinvented church elements, and Body-Lawson’s own acrylic paintings on found materials, create authentic and distinctive touchstones, rooted in place and instilling lasting pride.

Body-Lawson has also made a strong case that more architects should also serve as their own real estate developers. His work with Brownstone partners on affordable housing and with Baltimore Redevelopment Project, LLC, has helped prioritize quality-of-life and fair valuations in city areas facing gentrification and cost pressures.

In addition to his direct work in West Africa on urban residences and a hospital in Ghana, Body-Lawson has also led the creation of new townhouse developments in Baltimore, Md., and residential complexes in Fort Lee, N.J. His teaching collaborations at five universities with architects from around the United States and abroad in Havana, Cuba, have shared key lessons from his projects in Upper Manhattan and the Bronx.

“For the past 25 years, my journey as an architect along with my colleagues has been to endeavor to empower people with architecture, especially through equity in affordable housing,” said Body-Lawson. “So, to be acknowledged with the Leadership in Housing Award speaks volumes about our contribution to the built environment.”