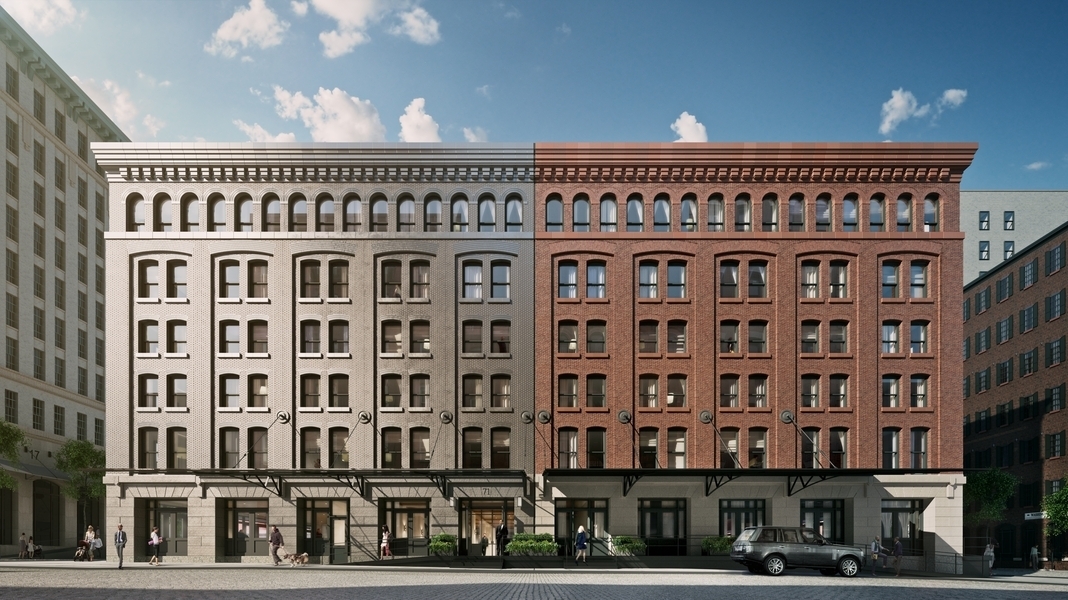 A tale of two halves in tony Tribeca

In case you needed more evidence that Manhattan’s luxury market is back from its post-Lehman slump, look no further than the Sterling Mason.

Tribeca’s latest luxury condo, long delayed following the 2008 market crash, is finally on its way to completion. And so far, it has been spectacularly successful.

One of the building’s three penthouses, reportedly scoped out by Leonardo DiCaprio, sold for $21 million in October — a whopping $4,565 per s/f. The second penthouse recently hit the market for $23 million.

Penthouses in other new developments have fetched more, for example at nearby 56 Leonard, but the 32-unit Sterling Mason hardly fits into the same category as sky-high glass towers.

While most current luxury condos try to stick out as much as possible, Taconic Investments’ development is decidedly unassuming — at least on the outside.

Sterling Mason, designed by architect Morris Adjmi, is both new and old. One half is a landmark-protected, terracotta and brick former warehouse, the other half is its newly-built replica in metal. The name is meant to represent these two halves.

Dan McInerney, who manages the project for Taconic, said this design allowed the developer to build bigger than the site’s landmark status would normally allow.

Taconic took over the exterior design from the site’s previous owner, Alvaro Arranz. The developer had purchased the site for $57 million in 2007 and gained landmark approval, but the project became stalled during the financial crisis.

In 2012, Taconic bought the site for $65 million, and set out on a lengthy redesign of the interior. McInerney said the company spent eight-to-nine months on the floor plans alone.

“But it’s time well spent, because buyers at this level are savvy, they understand the market but also look at the design,” he explained.

One detail particularly well received by buyers, according the building’s broker, Bruce L. Ehrmann of Douglas Elliman, is the fact that shower knobs are next to the door rather than under the showerhead.

Classic styles dominate much of the interior. In a nod to Roman mansions that is hard to find elsewhere in Manhattan, the building will boast a large, atrium-style courtyard garden. Windows facing the courtyard will have 19th-century-style Tribeca shutters and French balconies.

A more modern twist is the building’s foundation, which McInerney described as a concrete bathtub. In the event of another flood, this should keep water out and placate residents traumatized by Hurricane Sandy.

Sterling Mason also has a generator feeding every refrigerator and outlet in each master bedroom in the event of a blackout.

So far these designs only exist on paper. The original half is currently covered in scaffolding while the exterior walls on the other are rising up. Scheduled to be ready in the fourth quarter of 2014, sales of the building’s two- to five-bedroom units are already progressing swiftly, according to Ehrmann.

Somewhat surprisingly, Taconic’s McInerney said he has sold some of the units to Chinese buyers, who traditionally tend to prefer new, high-rise developments. Numerous brokers have recently observed that more and more Chinese buyers are starting to look at old-school buildings, and the Sterling Mason’s success in the Far East seems to confirm this.

Apart from the $23 million penthouse, currently available apartments include a 3,700 s/f, five-bedroom apartment listed for $9.65 million, and several three-bedroom units ranging from $5 million to $5.8 million.

“We are just about sold out of five-bedrooms,” Ehrmann said. “It’s not easy to get that many bedrooms in Tribeca.” микрозаймы и займы онлайн без отказа