In a city that has become the site of a growing amenities arms race involving luxury condo towers, one residential project is going the minimalist route.

Related Companies’ 70 Vestry in Tribeca is looking to differentiate itself by facilitating movement among its would-be residents.

The building, which will offer 12,000 s/f of amenities, is being built with the tacit mission of keeping people’s body mass indexes at healthy levels.

“Here, you’ll be a block away from going for run or going for a bike ride,” said Related Sales broker Robert McCain as he gestured towards Hudson River Park.

However, the building’s primary health benefits go beyond its proximity to green spaces, it comes with fittings that would make it harder to come up with an excuse not to exercise.

For bike riders, the building offers many perks. The tower will have storage for up to 50 bikes, following a trend brought on by demand and a city-wide directive.  Other residential projects with the amenity include 388 Bridge in Downtown Brooklyn and Forty2East in East Williamsburg. “There’s going to be a room where you can stretch and where there would be lockers for residents where you could keep your running shoes or drinks, or something like that. You can come down there, get ready to go for a run or a bike ride. You don’t have to check your bike through the lobby or through the courtyard. It’s all waiting for you there. And then you can come back and do the same thing after you’ve exercised. You can just step away. I just think it’s a really neat amenity,” McCain said. 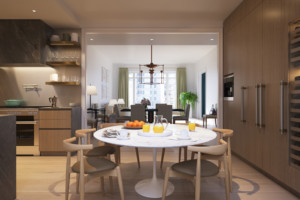 However, the building’s perks for bike riders go a step further. The space has stands where residents can mount their bikes so they can warm up inside before venturing to the cobblestone streets of Tribeca.

The building will also have a squash court, making it one of the few towers in the city with the amenity.

“I think that the squash court is a really special feature,” McCain said. “There are not a whole lot of buildings around that have squash courts. And it’s international regulation size as well, which is really neat.”

Currently, Related is thinking of ways to maximize the space taken up by the squash court. “It can have other uses as well. You know, for people who aren’t into squash. One of the ideas is to have a retractable basketball hoop,” McCain.

However, would-be residents would not be limited to two choices. The building will also have a fitness center outfitted by West Village gym, The Wright Fit. There’s also an 82-foot swimming pool in the building’s spa suite.

Outside, 70 Vestry stands as a tribute for Tribeca’s industrial past. Designed by Robert A.M. Stern, the building has been described as an “intimate 14-story building” that features split-face limestone at the base and a cobblestone courtyard.

“I think that those were all elements that Mr. Stern used to try to contextualize it into Tribeca,” McCain said.

“Most of the architecture around here is fairly traditional. The cast-iron buildings and the Roman-esque revival buildings with all the arches and the masonry, that kind of thing. He wanted to do something more traditional like this. I think this is a really nice blend. It’s not modern, it’s traditional. It’s a modern classic. I think he did a really good job of doing that. The metal frames of the windows, with the rivets, speaks to Tribeca’s industrial past.”

As expected, a building that has the names of Related and Robert A.M. Stern is going to require a hefty investment. The starting price will be $6.25 million, with the average sitting at $14 million. Buyers won’t move in until 2018, however, multiple contracts have already been signed for units in the building’s base and in the tower itself.