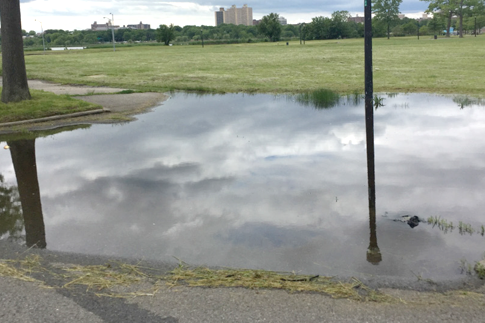 A new report published by the Center for an Urban Future finds that the aging of New York City’s parks system has contributed to serious infrastructure problems at dozens of parks across the city.

The report reveals that the average New York City park is 73 years old, and that parks in every borough are struggling with aging assets that are at or near the end of their useful life — including drainage systems, retaining walls, and bridges.

While the mounting infrastructure needs are largely due to the age of the system and record usage of parks in recent years, the study concludes that the problems have been compounded by decades of under-investment in basic parks maintenance and inadequate spending on infrastructure upgrades.

According to the report, 20 percent of parks across the city have not undergone a major infrastructure upgrade in 25 years.
And at least 46 parks, plazas and triangles in New York have not received significant capital investment in nearly a century.

“The subway system isn’t the only vital piece of infrastructure in New York that is aging and in need of investment,” said Jonathan Bowles, executive director of the Center for an Urban Future. “Parks in every borough are experiencing infrastructure problems brought by age and magnified by record usage and decades of under-investment in parks maintenance.”

But it concludes that much more will need to be done to shore up the city’s aging parks system, and it urges the mayor and the City Council to increase funding for infrastructure upgrades and basic parks maintenance.

Among the report’s recommendations, it calls on the mayor and City Council to establish a dedicated pool of capital funds for addressing un-glamorous infrastructure needs, much of which gets overlooked in discretionary funds provided by the Council. It also urges city officials to create new dedicated revenue streams for basic parks maintenance, and it identifies three new opportunities to do so: 1) a surcharge on tickets for sporting events; 2) a surcharge on greens fees at the city’s public golf courses; 3) a surcharge on docking fees at marinas that are overseen by the Parks Department.

Last month, Governor Andrew Cuomo announced a new $150 billion infrastructure plan that will support the creation of 675,000 jobs and investments in infrastructure initiatives across the state including $32 billion for improving environmental facilities, rebuilding parks, and creating a cleaner, greener state.

City doubles down on commitment to Minority & Women Owned Businesses