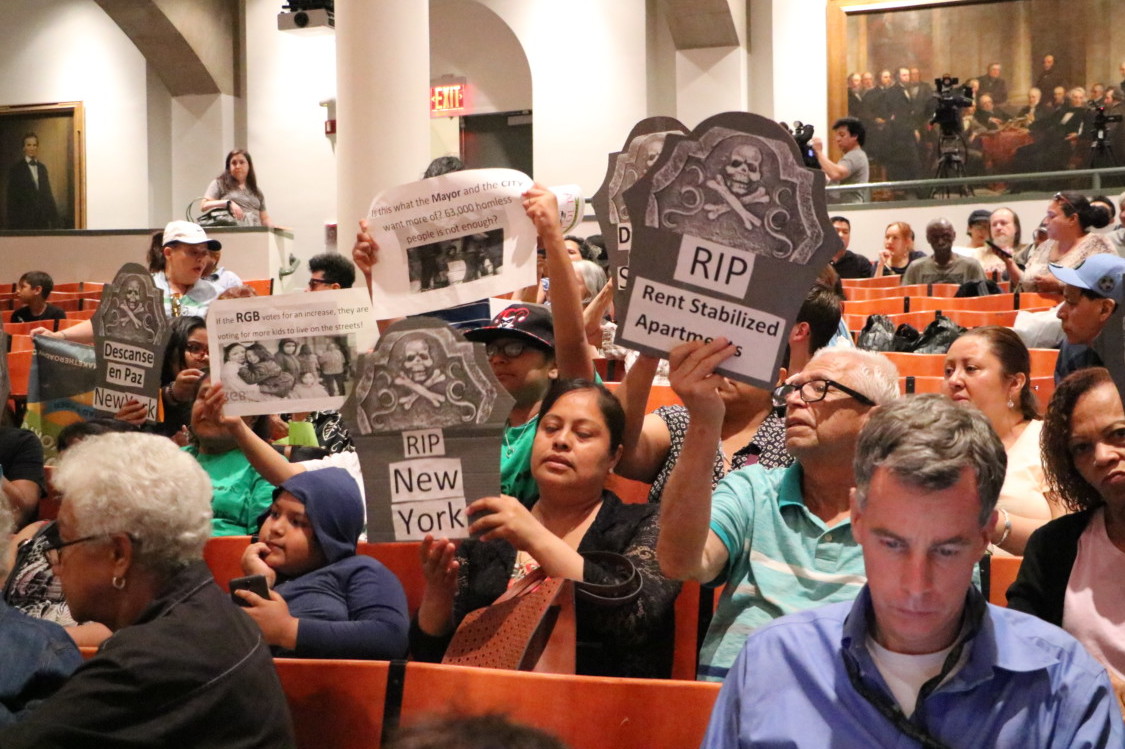 The RGB approved 1.5 and 2.5 percent increases for rent-stabilized tenants during a final vote that took place at Cooper Union’s Great Hall on Tuesday (June 26).  The increases – proposed by chair Kathleen Roberts following several months of negotiations –  passed in a narrow 5 to 4 vote.

“The de Blasio controlled RGB has now provided landlords with two rent freezes and pathetically insufficient rent increases – including this one – that total 3.75 percent over the past five years, while the Mayor has raised property taxes 31 percent during that same period. Tonight’s rent increase doesn’t come close to compensating landlords for building operating costs, which the RGB’s own data shows a 4.5 percent increase this year. You do the math,” said Strasburg.

“Landlords of rent-stabilized apartments cannot repair, maintain and re-invest in their quality affordable housing, and pay their ever-increasing taxes, when de Blasio has a stranglehold on their primary source of income. We don’t need to look further than New York City’s public housing to see the results of inadequate resources and financial neglect,” Strasburg said.

While the annual vote usually ends with a proposal that is a compromise between high increases from the board’s landlord representatives and low increases, or often a rent freeze, from the tenant representatives, this year a public member voted with the tenants.

Rodrigo Camarena, who was appointed to the board by Mayor Bill de Blasio this year, voted  for a rent freeze while the other public members, as well as the owner members and the chair, voted against it. “For the vulnerable, for the displaced, for fairness, I vote yes,” Camarena said when casting his vote.

In another departure, new owner member Angela Pinsky voted against the chair’s proposal, while the owner member, Scott Walsh joined the public members except in approving the increases that ultimately passed.

While tenant organizers argued that anything above a freeze was too high, Pinksy argued that the increases that passed were too low. Pinksy said that she and Walsh had pushed for a higher increase. “We want to keep it high enough to incentivize landlords to have their buildings in good repair,” Pinksy explained. “We don’t want the landlords to sell or redevelop the land. We’re looking for a number that will encourage owners to maintain their buildings.”

Tenant representative Leah Goodridge, who is also a new member of the board this year, said that she was surprised by Camarena’s vote for the rent freeze. “It was pretty historic that a public member pulled away and voted for the freeze,” she said. “The majority of public members usually vote for the chair’s proposal.”

The preliminary vote in April did not include a rent freeze, but instead presented an increase in the range of 0.75 to 2.75 for one-year leases and 1.75 to 3.75 for two-year leases.

Assembly Member Harvey Epstein, who was previously on the other side of the table as a tenant representative on the board , encouraged tenants at the meeting to vote in local elections, especially since the rent laws are expiring next year. He noted that a 10-bill package passed the Assembly this year, including reforms for Major Capital Improvements, preferential rent and vacancy bonuses, but as usual, the legislation didn’t pass the State Senate.

Despite this, Epstein said that he’s optimistic. “We’re only one or two votes away from flipping the Senate and being able to pass some of these bills,” he said. “We’ll know by November where we’re at.”

Greystar to acquire student housing leader for $4.6B