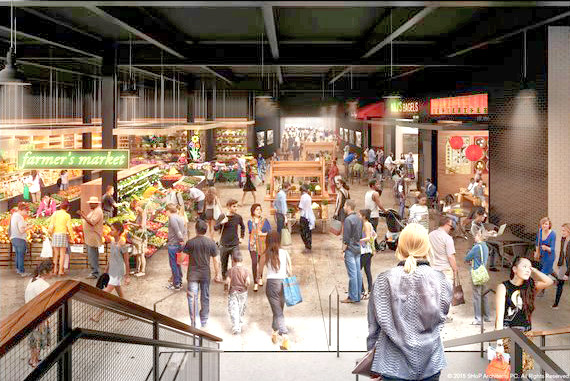 Delancey Street Associates (DSA) announced the latest round of vendors joining The Market Line, a huge bazaar-like marketplace running three city blocks along Broome Street as part of the Essex Crossing project on the Lower East Side.

Opening later this year, The Market Line will gather a diverse mix of more than 100 locally sourced food, art, music and fashion retailers that embody the character and culture of the LES.

It will complement the new home for the 77-year-old Essex Street Market, all of whose current vendors will move into an adjacent state-of-the-art space later this year.
Upon completion, the 150,000 s/f Market Line will not only be the largest market in New York City, it will be one of the largest in the world, putting this modern interpretation on par in size and scope with historic La Boqueria in Barcelona and Borough Market in London.

Alan Kaufman, founder and owner of The Pickle Guys says, “As a pickler working on the Lower East Side since the early eighties, I’ve watched the evolution of the neighborhood. Where there were once several pickle stores populating the area, we are now the only one remaining on Essex Street.

“We’re excited to be joining a project that values the cultural and historic traditions of the LES while heralding a new chapter of its evolving food culture.”

Mark Isreal, the founder and owner of Doughnut Plant says, “When I started Doughnut Plant in 1994, I was making doughnuts in the basement of a Lower East Side tenement building that had been converted into a bakery and would deliver the doughnuts around town on my bike in the morning. Engaging with the neighborhood’s community has been an integral and rewarding part of our business from day one. In joining The Market Line, we get to further our relationship with the neighborhood and become a part of the vibrant community that this marketplace will undoubtedly foster.”

Spearheading The Market Line and other retail components of Essex Crossing, The Prusik Group will not only bring together the best in fresh foods and ethnic specialities, but will also curate the gallery and performance spaces as one third of the space will be devoted to the local arts.