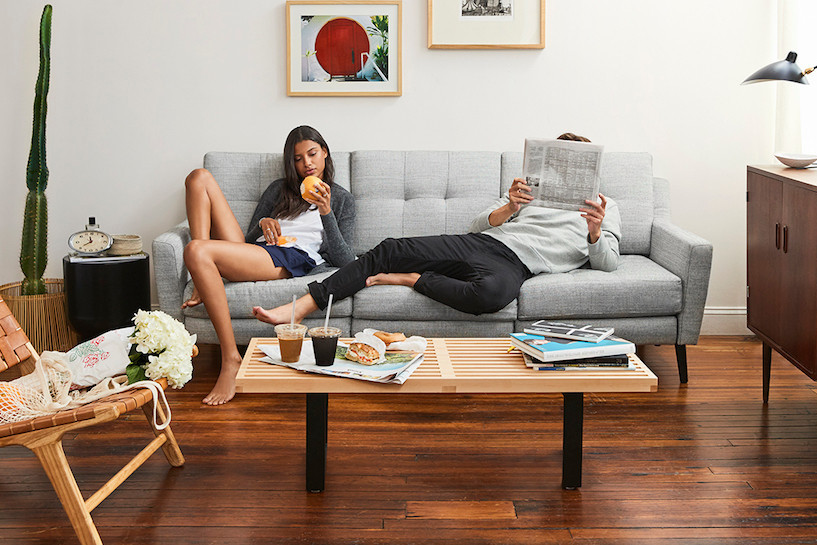 Internet’s favorite couch is making itself comfy in NoMad

The Kaufman Organization just announced that Burrow, Inc.,  a luxury sofa manufacturer that ships boxed up seating that can be assembled in 10 minutes or less,  has signed a 5,909 s/f lease at Kaufman’s 15 West 27th Street (15W27).

The sofa startup that’s become a darling of the internet is relocating from nearby West 21st Street to an expanded pre-built space on the seventh floor of 15W27 – part of Kaufman’s Madison Square Portfolio – for its corporate offices and showrooms.

Burrow’s move comes as the company closes a fresh round of fundraising that drew $14 million led by Tony Florence’s New Enterprise Associates, the same venture capitalist that helped launch Jet.com and mail-order bed big, Casper. Burrow was founded in Philadelphia in 2016 by then students Stephen Kuhl and Kabeer Chopra who engineered their own solution to the perennial problem of the under grad – how to get a cheap, new sofa into your studio.

With $3 million in sales last year, Borrow relocated its manufacturing plant from Mexico to Mississippi, expanded its product line and opened dozens of showrooms across the country. At 15W27, it will join architects Fernando Romero Enterprise,  Pondicheri, a Texas-based restaurant that specializes in modern Indian cuisine, and Barstool Sports, a men’s digital lifestyle magazine.

“Kaufman’s Madison Square Portfolio is strategically positioned to attract clever and inventive firms like Burrow,” said Grant Greenspan, principal of Kaufman. “15W27 offers this burgeoning firm a turnkey, flexible, loft-style space complete with top-tier technology to house its offices and showrooms in one of Manhattan’s most trendy and design-forward neighborhoods.”

Greenspan along with Elliot Warren and Michael Heaner of Kaufman represented the landlord in the new lease while Timothy Freydberg of CBRE represented the tenant . Asking rent was $67-per-square-foot and the tenant is expected to take occupancy this month.

Kaufman spearheaded a multi-million dollar capital improvements campaign since acquiring Madison Square Portfolio in April 2014, in an effort to appeal to creative, tech and new media tenants. offers amenities that meet the technology, broadband and security needs of its tenants.

The firm teamed up with Design Republic architectural design firm to create a lobby with custom-designed, illuminated, three-dimensional wooden fins and elevators with glassed back walls that reveal custom graffiti art.