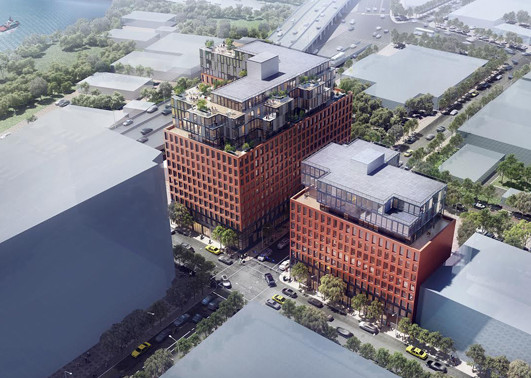 With the influx of interest in the Mott Haven neighborhood of the Bronx, brokers and developers are capitalizing on the buzz around what they deem the final frontier of relatively affordable housing in New York City.

It’s understandable why the area—with its roughly 30-minute commute to Midtown and waterfront views—is appealing to the real estate industry and potential tenants. Many compare the area and its largely industrial makeup to Williamsburg and Long Island City before their economic booms.

“There’s a lot of untapped opportunity in terms of being so close to the Piano District as well as having a lot of character to the neighborhood,” Adam Mermelstein, an area developer, said about Mott Haven. “It’s more of an industrial neighborhood right now with a smattering of residential and we think it’s almost like Williamsburg 20 years ago.”

And similar to those two neighborhoods that saw a real estate revival, market reports are tell a similar story. According to Ariel Property Advisors’ Bronx 2017 Year-End Sales Report, the Bronx is continuing to attract a lot of attention while its inventory slowly tries to catch up.

Their report found that multifamily pricing was continuing its trend up as price per square foot increased seven percent to $196 from 2016, and price per unit also increased the same percent to $176,000, as compared to 2016. Ariel’s report also added that transaction volume of multifamily units also dropped 24 percent this year to 152, as compared to 200 in 2016 and 227 in 2015.

While the numbers may not be surprising for those keeping their eyes on the Mott Haven and larger Bronx area, brokers who are already involved in these markets said that their listings are drawing in the crowds.

Manny Pantiga, owner of the Bronx-based real estate company the Pantiga Group, likened the trend to a “gold rush of the Bronx.”

“Mott Haven has always been interesting because of the proximity to Manhattan, even before all the media attention it’s been getting,” Pantiga said. “What’s happened now is folks are beginning to understand on a much, much larger scale of the value Mott Haven brings.”

Pantiga, whose company has been dealing with Bronx properties for nine years, said his most popular properties currently are the existing brownstones on the more charming streets of Alexander and Willis Avenues.

But for the first time in his time as a broker, Pantiga said Bronx properties are attracting buyers from outside of the Bronx. While Bronx buyers usually come from the Bronx, Pantiga said that more recently, interested buyers are hailing from Manhattan, Brooklyn, Queens, and even foreign countries like Switzerland.

Pantiga attributes the neighborhood’s continued success to a matter of Manhattan-adjacent supply.

“Everything that borders Manhattan had been pretty much tapped out,” Pantiga explained. “Long Island City is tapped out, even Riverdale on the Jersey Side. Except the Bronx, it was the last frontier that bordered Manhattan that hasn’t been tapped out.”

For Mark Martov, a licensed real estate salesperson for Corcoran, he sees the area’s multifamily residences, townhouses, and even rentals attracting a flood of attention in the limited supply of Mott Haven.

“It’s the final frontier if you’re looking for a relatively affordable place that still has a lot of upside,” Mark Martov, a licensed real estate salesperson at Corcoran said. “There’s a lot more interest on the buyer’s side. But on the seller’s side, everyone is holding onto the inventory because they see the prices skyrocketing.”
And when Martov works with Bronx listings, every one of them has “been on fire.”

“We’ve had almost every open house have 40 people show up,” Martov said. “Big thing I’ve been really noticing is that people have been coming from all over the city.”

Martov said the future residents see the value in trading off a few more minutes on a train ride to Mott Haven for a likely 40 percent discount in pricing as compared to Harlem. The Corcoran broker has been seeing a mix of families and young professional move in, even as the prices continue to rise.

But brokers noted that the industry will see plenty more growth as the second most popular property are those coming online in the next few years.

Mermelstein, a partner of Treetrop Development, is currently working on a mixed market-rate and affordable housing building at 414 and 415 Gerard Avenue in Mott Haven (pictured top). The developer said the neighborhood would follow similar trends to neighborhoods like Long Island City and Williamsburg.

“We strongly believe in the economics of the neighborhood,” Mermelstein said. “A lot of people are going to parlay off what we’re doing, and at the same time, we are buying other land in the area in hopes of our property being a success.”

Doug Wagner, the director of brokerage services at the BOND New York and leading the marketing for 414 and 415 Gerard Avenue, said the area around the Harlem River will see a major growth spurt within years with all the new development coming in.

Wagner added that with all the new units coming online, they’re beginning to see a trend of more early-career New Yorkers flooding into the Bronx as well because of how well the property can suit them.

“Can you imagine coming to New York with a liberal arts degree and being able to live in a building with roof decks, gyms, and a lot of programming that’s geared towards a freelance lifestyle?” Wagner said. “If you’re a graphic designer, an illustrator, a choreographer, [it’s important] having facilities in a building that allows you to develop your craft without having to go rent out a studio.”

As the area is expected to attract a younger crowd, Wagner said Mott Haven will end up becoming a rich creative environment that builds off of the Bronx’s existing character.

As for other developments, Mermelstein said they’ll be keeping their eyes on the Crescendo, an available nearby development by Carnegie Management at 25 Bruckner Boulevard, but he also expects others will see their success and follow suite.

But some developers are already making waves, including the Chetrit Group and Somerset Partners with their expected seven-building development that will offer 1,300 units along the Mott Haven waterfront. Others like the Bridgestone BX, a Mott Haven rental building at 329 East 132nd Street developed by JCAL Development Group, is scheduled for a 2018 completion and offers 91 units.

Brokers like Pantiga actually expect the broker side of things to improve as there’ll be more inventory to offer up a demanding clientele base looking for affordable prices.

While brokers are seizing on this golden opportunity, many of them realize that it will include a transplant community moving into a neighborhood with a rich identity. But with all the new development and interest, those in the industry are expecting to see these results in the near future.

“The test will be to see the communities come together,” Wagner said. “There’s been a little concern that when an area that’s as authentic as the Mott Haven and South Bronx area has become because of the arts and local residents, some people are loathed to see development happening.”

Others, like Pantiga, have an understanding, but hopeful outlook in the face of the changing Mott Haven.

“These transformations, as much as there is gain, there’s loss. There’s loss of culture and tradition,” Pantiga said. “At the end of the day, a lot of people are moving in and then sense I get is they will embrace the culture. I believe just like it’s happened everywhere else in New York City, we’ll all just find a way to get along and enjoy the Bronx.”