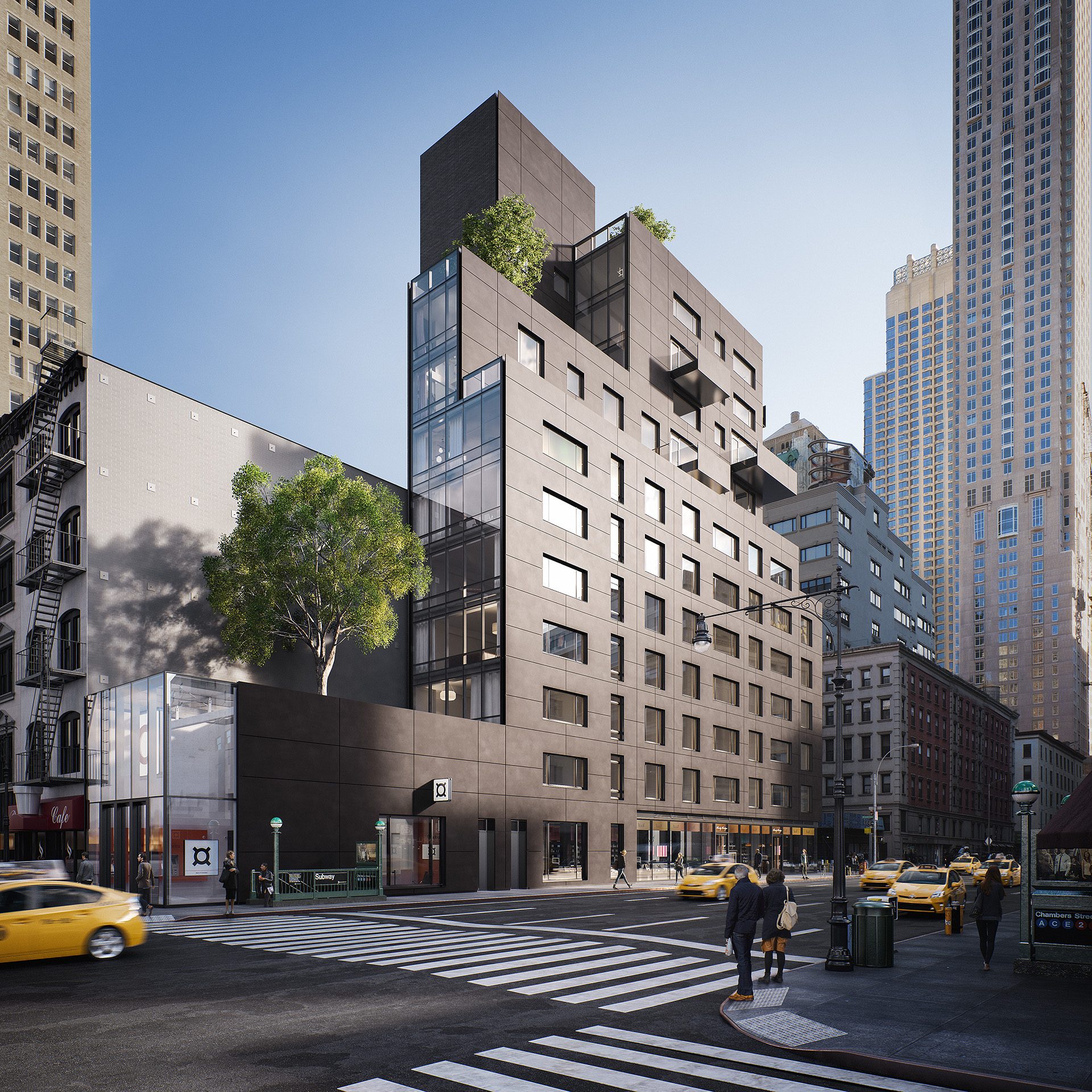 On its surface, New York is a city of constant motion, bustling with people, humming with innovation and always changing.

Yet, at its core, there’s a history that, much like the switches and signals of the subway system, seems impervious to change. It’s comforting and, as the resale market for old buildings shows, it has value.

Herein lays the problem, however, for developers and architects of new buildings: how does one capture the essence of the existing while crafting something unique? How can a building stand out and blend in at the same time?

At Cape Advisors’ 30 Warren condo project, Post-Office Architectes has tackled this conundrum in arguably the most New York way possible: by covering it in concrete.

Unlike the lifeless gray of trampled sidewalks and unseen superstructures, the French firm created a distinct hue by mixing in the various colors of its surroundings in Tribeca: the reds and browns of clay bricks, sandstone tan and cast-iron black, to name a few.

At close range, the surface sparkles and from a distance, depending on the angle and time of day, it can appear in an array of tones, even varying slab to slab thanks to the crisscrossing corrugated patterns etched into them and the shadows created by the slight separation from the curtain wall and the gaps between sections.

“We needed to create a building that was domestic and adapted for families and was reflective of Tribeca’s unique character,” Francois Leininger, co-founder of Post-Office Architectes, told Real Estate Weekly.

“The precast concrete façade conveys the sense of domesticity and connects indirectly with the architectural heritage of Downtown’s old cast iron buildings,” he added. “The large windows, multiple terraces and balconies frame the city in dramatic ways.”

The end result will be a sleek, modern residential building with sharp angles and northern exposure of all glass. Angles are sharp and the numerous terraces will be punctuated by three trees, the tallest of which will be a 35-foot Kentucky coffee tree.

The 23-unit building is a far cry from the century-old converted warehouses that populate the area, but no more so than 56 Leonard, the staggered-box tower located just a few blocks to the north.

“We feel 30 Warren is a blend of old and new,” Cape Advisors co-founder Craig Wood wrote in an email. “It speaks to the older, surrounding buildings with its scale and coloring, which the team specially created by mixing together a number of colors they found throughout Tribeca. At the same time, 30 Warren asserts a more innovative and modern design with its concrete and glass facade. It is this fusion that enables it to be seamlessly woven into the fabric of the neighborhood.”

Standing 12 stories tall over Church Street between Chambers and Warren, 30 Warren is part of the latest class of luxury residential developments to sprout up in the historic Lower Manhattan neighborhood.

Like the concrete façade, hand-crafted furnishings and finishes can be found throughout the residences, which range from a shade under $2 million to nearly $8 million.

Although 30 Warren does not feature the glass curtain that has become common in today’s new construction, it does feature floor-to-ceiling windows in select areas and all bordered by champagne-colored aluminum window frames, some as big as 13 feet wide and weighing 1,000 pounds.

Made by Schuco, the glass did an impressive job of blocking out street noise when REW toured the site last month.

The building is still under construction, but Cape Advisors expects it to be complete early next year.

Sales began at 30 Warren this past spring with the Corcoran Sunshine Marketing Group representing Cape Advisors. A representative declined to say how many units have been sold but said there has been “lots of activity,” with interested parties come forward from elsewhere in Manhattan as well as Brooklyn.

Despite its relatively short stature — by Manhattan standards, anyway — the building befits from being on two corner lots. Residents, especially those with private terraces on the seventh floor and up, have views of

Financial District towers, such as One World Trade Center and the Woolworth Building, as well as 56 Leonard and tops of the new Hudson Yards structures in the distance.

From the penthouse’s rooftop space, the Brooklyn Bridge can be seen to the east and white spikes of the Oculus can be spotted when looking due south.

The building will also feature ground-floor retail on the Chambers Street side and shared resident amenities, such as a fitness center, children’s playroom, bicycle storage, a laundry room and a full-time attended lobby.

For Leininger and his partners, Line Fontana and David Fagart, 30 Warren represents their first project in the U.S. Leininger said the more lenient zoning in New York City enabled his firm to do things that would be impossible in his hometown.

“In such a historically remarkable neighborhood as Tribeca, it felt like everything was possible,” he said. “In a similar historical corner of Paris, the zoning rules would generally make architects feel more restrained.”