As late as a year ago, most real estate experts scoffed at the notion that New York’s luxury condo market is heading for a bubble, pointing to a seemingly infinite supply of billionaires and dropping the phrase “safe haven” more often than a Republican says “Obamacare”.

But in the past months, opinion has shifted noticeably as more and more new luxury towers are being announced.
At a celebrity-heavy panel at last week’s NYC Real Estate Expo, most industry leaders agreed that luxury condo development is heading in the wrong direction.

The most vocal critic was Ofer Yardeni, head of development firm Stonehenge. “Condo development is on life support,” he told a packed audience at the Expo, adding that the much-touted luxury condo market on 57th Street “has just stopped”.

Yardeni argued that foreign billionaires are now more cautious to invest in New York real estate due to the possibility of sanctions by the Obama administration against foreign nationals.

He also called the High Line “completely over-rated” and made the claim that he couldn’t afford to buy a condo at current prices.

Richard Mack, CEO of Mack Real Estate Group, made a similar point when he argued that the luxury condo market depends in large part on foreign capital flows, which in turn depend on macro-economic and geo-political factors and could be turned off at any time.

Of the seven panelists, only Norman Sturner, president and CEO of MHP, and Stephen Siegel, chairman of CBRE’s global brokerage, objected to the claim that New York City is in the middle of a luxury condo bubble.
Sturner made the familiar argument that New York is a safe haven for blighted foreign investors, pointing to the $1.9 billion the Chinese insurer Anbang recently paid for the Waldorf Astoria.

“This was a matter of getting money out of a foreign country and burying it specifically in New York City,” he claimed.

“In my opinion, there is no bubble.”

Among real estate executives, Sturner’s opinion is an increasingly rare one.

“Otherwise the market fundamentals point to New York being strong,” he said. “We’re clearly not at the bottom, but we’re not at the top.”

Bruce A. Beal, Jr., president of Related Properties, was similarly pessimistic about luxury development on 57th Street during a ULI panel about residential housing Oct. 22 at the Javits Center.

Noting that zoning that accommodates dense structures has pushed land prices north, Beal said the logistics left developers with no option by to build luxury condos to make a profit.

He acknowledged that while many luxury buyers are foreigners looking to park their money in New York City, he questioned how long they can prop up the luxury market.

“People are priced out domestically,” he said. “Not everyone is a hedge fund manager.”

Beal said, even in the midst of the economic crash in 2008-2009, New York condo prices remained expensive, but warned, “I think we’re at the top of what should be produced there now,” he said of new development on  West 57th Street.

“We’re not there yet, [but] I think we’re seeing the beginnings of a slowdown,” Barnett said during a tour of a model apartment at One57, where a penthouse is reportedly in contract for $90 million.

A full pipeline of development could create an over-supply of luxury homes that would cause the entire market to contract, the developer believes.

Indeed, a recent report from the New York Building Congress forecasts that $32.9 billion will be spend on construction this year and nearly $11 billion of that will be on luxury apartments.

Most of the money being spent in the residential space will be put towards the construction of ultra-luxury condominiums, according to data cited by the Building Congress. 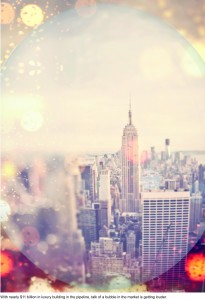 Developers will spend 60 percent more on new homes, while adding only 22 percent more units in 2014, an indication that apartments will be geared towards wealthy buyers.

In his interview with Crain’s, Barnett wanted that over-supply will leading to longer selling times as developers try to hold out for the eight-figure price tags they need to justify the cost of land and construction of the building.

“If this keeps up for another year, if we start seeing more and more buildings come into the market that we don’t know about … we will get an oversupply,” Barnett said said.

But rather than seeing land prices fall, Barnett believes that many development parcels will be held off the market.
While the developers appear jittery, most brokers still seem to be upbeat about the luxury condo market.

“I don’t agree with (Ofer Yardeni) on high-end condo sales,” CBRE’s Stephen Siegel said at the Expo panel, arguing that luxury apartments in Manhattan are still cheap compared to other global cities.

At a panel hosted by the Brown University Club of New York City later the same day, Eastdil Secured broker Doug Harmon also dismissed the notion of a bubble, pointing to the lack of new supply in the years following the 2008 crash.

Researchers, on the other hand, are beginning to sound more cautious.
In an interview with Real Estate Weekly, CityRealty’s director of research and communications said she sees challenges ahead for Manhattan’s luxury condo market.

“I wouldn’t want to make a projection on it,” said Gabby Warshawer, “but I think (the trend) is going to be definitely tested in the market in the coming year.”

Warshawer pointed to the bulking supply of luxury residences that are rapidly becoming available and admitted that, if the high-paced purchasing does not continue, there could be a mild bog in the near future.
For premium residences that exceed $10 million in price, $2.9 billion has changed hands over the opening three quarters of the year. That’s a 150-percent bump from last year’s opening three quarters.

“Really, what we’ve seen this year kind of represents a market life,” continued Warshawer. “Of the buildings that are on the market right now that are very high priced, many of the units in them are in contract.” взять займ онлайн