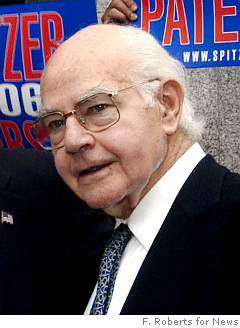 Bernard Spitzer, a civil engineer, real estate developer and philanthropist who built millions of square feet of Manhattan buildings, died on Novermber 1.
According to a family spokesperson, Mr. Spitzer succumbed after a long battle with Parkinson’s Disease. He was 90 years of age.

Always grateful for the opportunities he received, he and his wife, Anne, established a family foundation, which endowed a new architecture and urban planning school at City College as well as the Hall of Human Origins at the American Museum of Natural History.

They also funded stem cell research at Columbia University and Public Theater productions of Shakespeare in the Park, among many other philanthropic initiatives.
Education was a priority for his parents, Molly and Morris, who emigrated from Austria to a Lower East Side tenement on East 5th Street after World War I.
His father ran a printing business in the basement, with assistance from the young Bernard, who was fluent in five languages and could typeset in four.

A gifted student, he attended a local Yeshiva and then Townsend Harris High School, from which he graduated at age 14.
He received his Bachelor of Science in Civil Engineering from City College four years later. Initially assisting the war effort designing gyroscopically stabilized gun-mounts, he then joined the Navy, and was posted to heavily bombarded Bremen as a Lieutenant JG in naval counter-intelligence.

After discharge from the Navy, he attended Columbia University on the G.I. bill, earning a Master of Science in Engineering in 1947 and then accepted a position as field supervisor for the colorful Russian builder, Sam Minskoff.
With a few years of experience under his belt, he set out on his own, building Spitzer Engineering, one successful project leading to the next, into a successful family company.

Beginning in Riverdale with a 7-story brick apartment house completed in 1954, he then constructed a 112-unit residence on the northern section of the Grand Concourse.

In 1960, he and a business partner developed a 22-story co-op at 1050 Fifth Avenue opposite the Metropolitan Museum of Art. Eight more large-scale projects were developed from inception to completion over the next four decades.
In 1962, Mr Spitzer began development on the iconic 35-story apartment building at the corner of Central Park South and Seventh Avenue, a site diligently acquired parcel by parcel over many years after he spotted it from a taxicab window.

After acquiring at auction the site of the former East Side Airlines Terminal at First Avenue between 37th and 38th Streets, Mr. Spitzer faced a formidable hurdle.
While the zoning would allow some 865 apartments, making it the largest residential building in the city at the time (1989), connections to the Midtown tunnel ran like fault veins under a portion of the site. The result was The Corinthian, a 57-story curvilinear tower with an undulating façade of semi-circular windows gracefully secure on terra firma.

Mr. Spitzer and partners purchased the Crown Building on Fifth Avenue in 1991 and later two prime office properties in Washington, DC and one in Bethesda, MD. More recently, Spitzer Engineering acquired a retail condominium in SoHo and a development site in the Hudson Yards area.

A voracious reader and enthusiastic interlocutor, Mr. Spitzer presided over the family dinner table, which became a field for discussion, debate, questioning authority and intellectual rigor. Meals were punctuated with Socratic discourse.  Any appeal to authority or resort to ad hominem argumentation automatically lost the debate.

Before Mr. Spitzer had a drafting or dining table, he had a saxophone, which he played in the band at Weinrib’s resort in the Catskills.
It was there, when both were teens, that he met Anne Goldhaber, a counselor at the children’s camp. They married three years later, and recently celebrated their 69th wedding anniversary. They shared a passion for city life, classical music, tennis, skiing and literature — which Anne taught for decades at Hunter and Marymount Manhattan College.

Mr. Spitzer served on the boards of the Juilliard School, the Museum of Jewish Heritage, the Hospital for Joint Diseases, the Michael J. Fox Foundation and others.

In addition to his wife, he is survived by his daughter, Emily, a lawyer and former executive director of the National Health Law Program, his son, Daniel, a neurosurgeon, his son Eliot, former Attorney General and Governor of New York State, and seven grandchildren.

The Spitzer family requested that donations be made to the Michael J. Fox Foundation in memory of Bernard Spitzer.