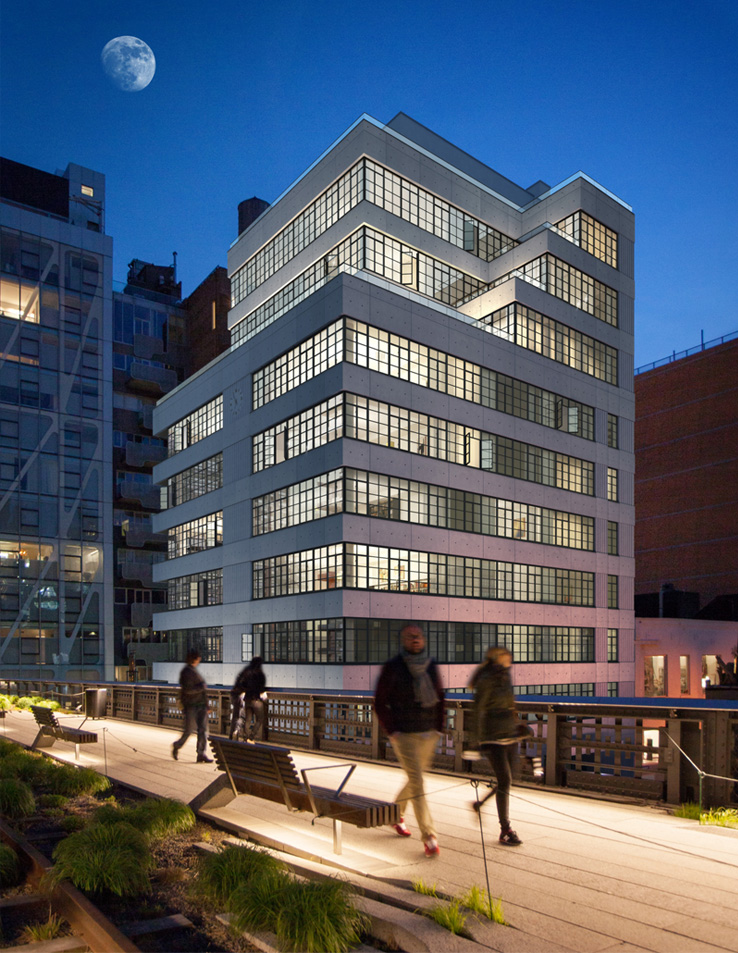 Hot for the High Line

Rain began to creep down the walls of banded windows as Cary Tamarkin held court in one of 508 West 24th’s penthouses.

Tamarkin was there to officially introduce the building, which he designed and built, and give some details on 550 West 29th, which he will be adding to the West Side’s High Line in the next three years.

“Classic modern, meaning not modern today,” said Tamarkin when asked what aesthetic he was looking to create when designing 508. “In fact, it’s quite out of touch with the fashion. It wants to be very clean and geometric, well proportioned, well composed.”
The architect/developer spoke at length about the draw of the High Line and how the area has attracted droves of families and millenials alike since the park was first opened.

On the surface, his comments reflect common marketing sense. But a deeper look gives an insight into just how large an impact the relatively new High Line Park has had on West Chelsea.

“Ten years ago, the West Side was considered a fringe area, not relatively safe,” Adelaide Polsinelli, senior director at Eastern Consolidated told Brokers Weekly.
“It was untraveled and avoided by most respectable citizens. The meat-packing buildings were busy with workers noisily driving their trucks through the streets from three in the morning ’til noon.ˮ

In 2009, Friends of the High Line co-founders Joshua David and Robert Hammond, together with Mayor Michael Bloomberg, opened the first section of the unique park hovering 30 feet above Manhattan’s West Side.
It was the first public park of its kind in the United States and the opening of that first half-mile section was the culmination of more than ten years of planning.
Last month, the third section of the park opened and, for the first time, the public is now able to walk along Tenth Avenue from Gansevoort Street all the way to 34th Street and 12th Avenue.

“The amount of tourists alone that have been drawn to the West Side because of the High Line, is staggering,” added Polsinelli. “The area is now not only a hot spot for locals, but it has received international attention.ˮ
Robert Dankner, president of Prime Manhattan Residential says that the housing market in the area was “asleep at the wheel” prior to the abandoned train tracks’ renovation.

“Western Chelsea, the High Line area is very interesting because it was created from ashes so to speak,” Danker said.
In the past two years alone, land prices have tripled along the High Line, according to Robert Knakal, the chairman of Massey Knakal who sold what’s been dubbed the Hudson Spire site to Tishman Speyer for $238 million earlier this year.

In 2013, Michael Shvo and Victor Homes paid $800 per buildable square foot for a site at 10th Avenue and West 24th Street only to be outdone by Related Cos a few months later when it over $900 per square foot for two other High Line sites .

At these prices, developers have to figure their finished apartments will sell at over $2,000 psf, according to investment sales broker who work in the area.
Tamarkin bought the 508 West 24th site during the recession. The Carlyle Group was his equity partner in the reported $16 million deal. He said he had a plan right from the start.

His boutique building of three bedroom homes was a direct response to the Avenues School. “I know for a fact that lots of families are moving to the area just for that, so that’s a tremendous draw,” he said.
Danker pointed out the Avenues School, saying that the desire for families to be geographically close is helping to both increase the value of the apartments and attract more than just a young, trendsetting crowd seeking the “hip factor.That attracted the other side of the spectrum, which is families,” said Danker.
“It created this influence that really changed the paradigm in terms of what was built there.”

Pointing out 200 11th Avenue and 456 West 19th — another Tamarkin product — Danker described the newest buildings along the High Line as having “industrial twang” and “open spaces” that mixed well with luxury. “Those were created with a tremendous level of hip factor, if you will,” he said.
Shlomi Reuveni, managing director of TOWN New Development, said, “It’s a neighborhood that has amenities and facilities and attraction and destinations for all kinds of buyers.

“There’s a lot of new inventory that’s come to the market recently because of the transformation of the neighborhood. And there are some beautiful buildings in terms of the architecture and interior design.”
Indeed, celebrated architects and designers from Sir Norman Foster to Thomas Juul-Hansen have been inspired by the High Line Park to produce head-turning homes.
Tamarkin made sure that his apartments are “divided north and south,” he said, “so everyone gets to participate in the High Line.”
He placed a signature clock face on the front of 508 West 24th and said that the advantage to constructing unique buildings is that “if the market turns, you’re not left with the same thing as everybody else.”

The school, the park, and the bevy of new buildings means higher prices than the area would have dared to fathom in the late 90’s and early 2000’s.
“These are buildings that have apartments that are 3-4,000 s/f being absorbed at break neck speed,” said Danker. The prices are up, but like most neighborhoods, there is a range from entry to high luxury. 505 West 19th for example offers units ranging from 3-5,000 s/f that are selling for between $300 and $500 psf, according to Danker.

551 West 21st, on the other hand, will offer units at 2-4,000 psf with three or more bedrooms that will sell for a ballpark of $3,000 psf.
As High Line residences fill out with members of the city’s upper income brackets, Tamarkin believes that the area has not yet begun to near its peak value.
“This is going to be highly impacted by Hudson Yards, which is just getting going, but it’s informing what we’re doing here,” said the developer.