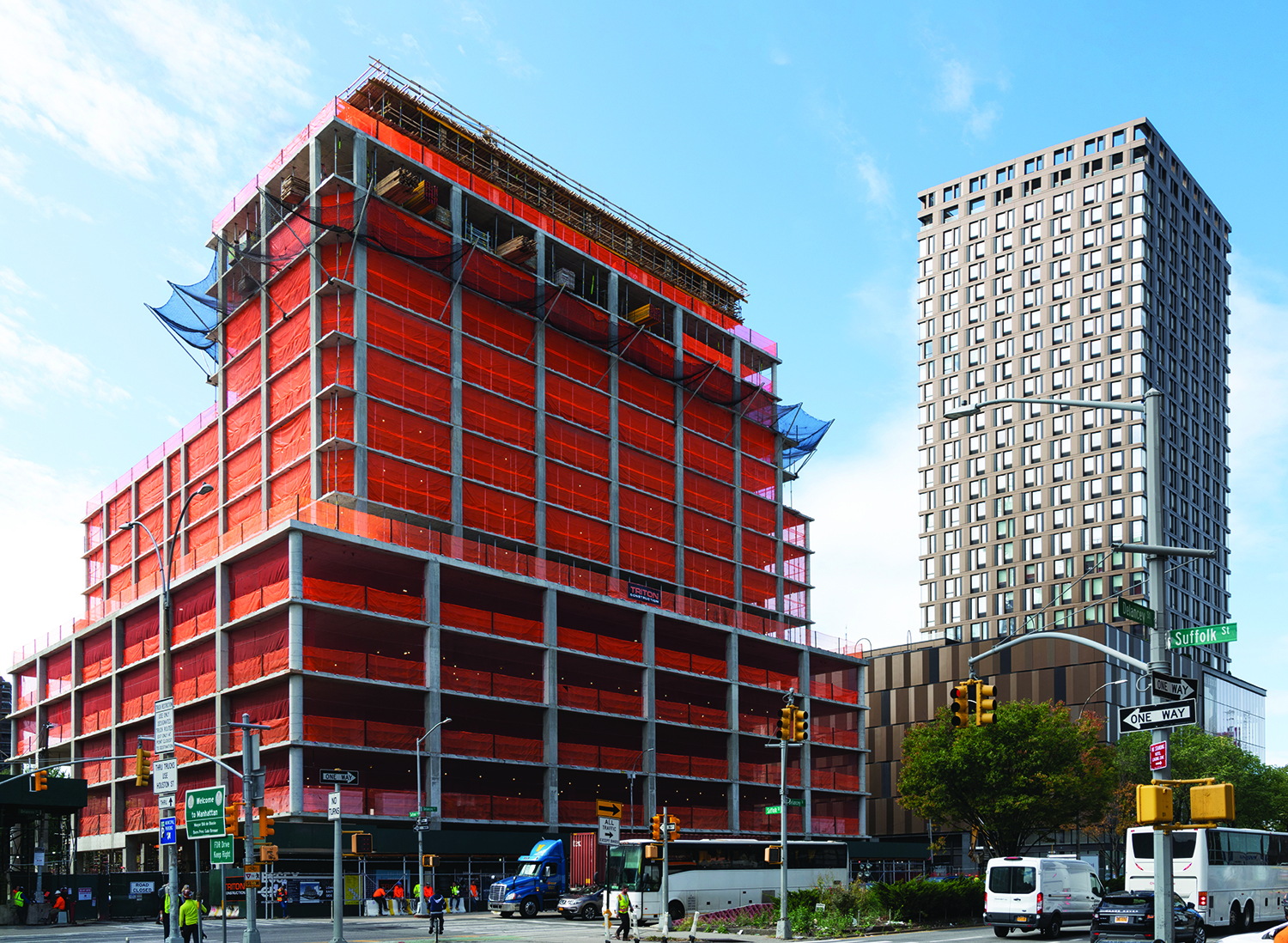 Delancey Street Associates (DSA) has topped out of 202 Broome Street, a 14-story mixed-use building that will include 175,000 s/f of Class A office space, 83 luxury condominiums and 34,500 s/f of retail space.

The retail includes a portion of The Market Line and the Broome Street Gardens, an indoor park.

The CetraRuddy-designed 202 Broome is the seventh of nine Essex Crossing sites to top out and anticipates a completion in late 2020.

Construction was financed through a $260 million acquisition and construction loan from Square Mile Capital Management.

The final building of Essex Crossing’s second phase to reach the topping out milestone, 202 Broome will feature luxury condo units on floors 6-14. The residences will have an amenitypackage featuring a fitness center, lounge, terrace, laundry facility and storage spaces for purchase.

Taconic Investment Partners is leading the development 202 Broome Street and overall leasing of the office space at Essex Crossing. A Cushman & Wakefield team of Josh Kuriloff, Matthias Li, Andrew Braver and Joseph Cirone will serve as exclusive broker for the office space.

Skyline Tower, the tallest building in New York City outside Manhattan, has officially topped out.
A joint venture by Risland Holdings LLC, FSA Capital and United Construction & Development Group, the building’s topping out was celebrated by the developers on October 11 on Skyline Tower’s 60th floor. There, the team placed items in a time capsule to showcase what life was like in Long Island City in 2019. Items included things like Polaroid pictures of the project team, Modern Spaces (the sales team) market reports, renderings of Skyline Tower, etc. The time capsule will be reopened in 50 years.
The 778-foot-high, translucent glass condo in Long Island City was designed by Hill West Architects. In September, the structure surpassed the height of neighboring Citigroup Building, which formerly reigned as the tallest building in Queens, at 673 feet.  Skyline Tower has also surpassed the height of Tower 28, which at 637 feet, was previously the tallest residential tower in NYC outside of Manhattan.
Modern Spaces has already sold $223 million worth of inventory since the project’s soft launch in May, equating to 25 percent of its 802 units.
The Hill West Architects-designed tower initially saw an influx in interest during the Amazon HQ2 debacle for its proximity to the proposed headquarters. It also broke record for the highest projected sellout at $1.067B.
Skyline Tower’s studio-to-four-bedroom homes range in size from 400 to 1,547 s/f, with pricing starting at about $500K to $4M, with move-ins slated to begin in 2020.
Skyline Tower has committed approximately $17M for a new entrance to the Court Square station, which serves the E, M, G, and 7 lines, at the base of the building.

Leasing is underway at 30 Morningside Drive, a 1904 parkside landmark that has been redeveloped as a modern rental with design by CetraRuddy.
The property features 205 units that were crafted using materials like low-emissivity window glass, sustainable bamboo flooring, and efficient HVAC systems. Amenities include sauna, fitness center, and yoga room.
The original building has a four-pavilion layout, that has been preserved, allowing for access to light, air and cross-ventilation in the units, and optimal exposure to the nearby park.
Designed by architect Ernest Flagg, 30 Morningside Drive occupies an entire city block front on Morningside Park, surrounded by its own landscaped gardens.
Ceiling heights are in excess of 11 ft. and many homes have terraces and park views.
Units also include Nest smart theromostat, a Bosch washer/dryer and and centreal heating and cooling.
Amenities include a rooftop terrace , interior landscaped courtyard, billiards room, fitness center, motion studio, pet spa, residents’ lounge, private dining and conference center with kitchen, library, a doorman and concierge staff.
Active listings starts at $3,167 for studios to $4,171 for one-bedrooms, $6,334 for two-bedrooms and $8,250 for three-bedrooms.

Ceruzzi Properties has announced that its offering plan for The Centrale has been declared effective.
Designed by Pelli Clarke Pelli, this 71-story Art-Deco-inspired property at 138 East 50th Street with features such as facets of terracotta chevrons and crystalline switchbacks offers 124 homes crafted by Champalimaud.
Exclusive Sales and Marketing is being handled by Douglas Elliman Development Marketing. One to three-bedroom residences range from $1.695M to over $5M, full-floor tower residences from $10.250M, and The Centrale Penthouse price is available upon request.
The building is now available for immediate occupancy and the scaffolding is scheduled to be taken down by end of this year.