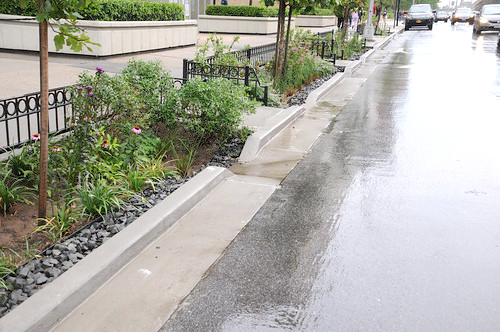 Rain garden plan will kick sewer overflow to the curb

Curbside rain gardens are set to sprout across New York as part of the city’s plan to expand its Green Infrastructure Program.

The City has already begun construction of more than 5,000 specially designed curbside rain gardens in Brooklyn, the Bronx and Queens, building upon the more than 4,000 rain gardens that have already been built.

The construction will bring a total of more than 9,000 curbside rain gardens to New York City, helping to prevent flooding and reduce Combined Sewer Overflows into local waterways by more than 500 million gallons each year, thereby further improving the health of New York Harbor and its tributaries. “We are deploying all of the resources at our disposal to tackle the challenge of global warming head-on,” said Mayor de Blasio.

“We are doubling the size of the largest green infrastructure program in the country, creating green oases in our neighborhoods and protecting our waterways for all New Yorkers to enjoy.”

Deputy Mayor Laura Anglin added, “These rain gardens will help mitigate the threat of heavy amounts of stormwater entering our sewer system, ultimately enhancing the health of our waterways across the city.”

More than 70 percent of New York City’s land mass is covered by an impervious surface, which creates tremendous volumes of stormwater entering the sewer system during rainstorms.

Curbside rain gardens help to soften the landscape and allow the stormwater to be naturally absorbed into the ground.

Some of the neighborhoods getting the rain gardens currently have less than average street tree counts and higher than average rates of asthma among young people.

The increased tree canopy and vegetation created through the addition of the rain gardens will help to improve air quality, according to the city.

Rain gardens are built in city sidewalks and do not result in the loss of any parking spaces.

They resemble standard street tree pits, except that they vary in size, have curb cuts that allow stormwater to enter and overflow and have been engineered in a way that will allow them to manage up to 2,500 gallons each during a storm.

In partnership with the Departments of Transportation and Parks and Recreation, DEP conducts a site selection process that includes geotechnical investigations and surveys.