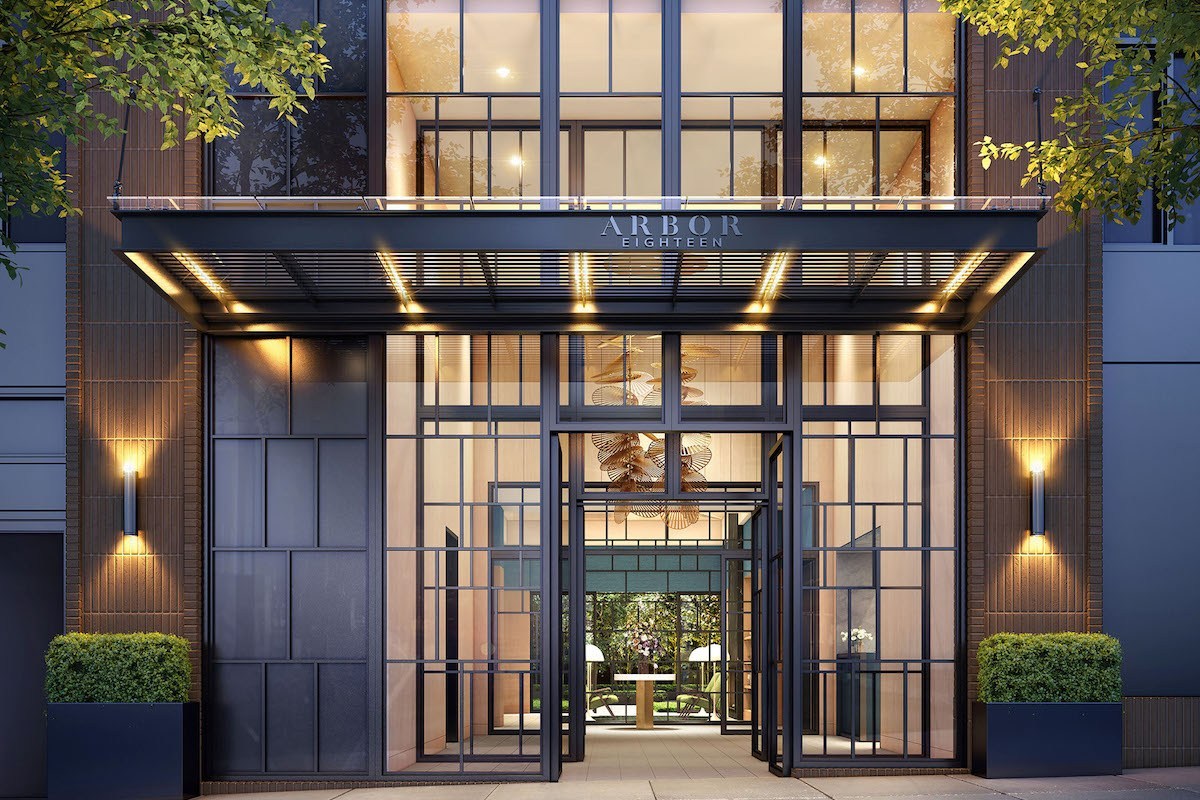 The Arbor 18, a newly constructed luxury condo tower in Brooklyn’s South Slope neighborhood, promises views both inside and out.

Spanning 11 stories and 73 units, the residential upstart, co-developed by CGI Strategies and Adam America Real Estate, which is still currently under construction, will offer residents ample green space which it says is inspired by the building’s proximity to Brooklyn’s Prospect Park and historic Greenwood Cemetery.

“Luxury today is all about finding time for yourself and having an oasis to come home to at the end of the day.” said Omri Sachs, co-founder of Adam America Real Estate. “We’re offering more than just a building, we’re providing a way of life for our residents, one that prioritizes balance and tranquility. Nothing of the caliber of Arbor 18 has ever existed in this neighborhood, which is why we are confident that buyers will jump at the chance to live here, particularly at such an attractive price point.”

Once completed by the end of the year, The Arbor, which is billing itself as a “green sanctuary” will offer residents the ability to utilize three green spaces that include a landscaped courtyard, a zen garden, and a roof deck.

“Having Prospect Park so close, there’s a great variety of trees plants in the area, and it seemed like a nice departure point for the project,” said Vanessa Connelly, director of sales for the Aguayo Team at Halstead Property Development Marketing which is marketing the building. “Having those green spaces gives people a sense of calm and relaxation.”

The courtyard, designed by architect Steven Yavanian — principal and design director of landscaping and architecture firm SYLA who is also known for his work at the Cleveland Museum of Art — features a mix of bamboo, deciduous trees, shrubbery and perennials, while the Zen Garden, which Yavanian described as a place for intimate reflection, contains sculptural boulders, Japanese maple trees, and small shrubs. The roof deck is outfitted with grills, grassy areas, and birch trees.

“Drawing inspiration from the local landscape and landmarks, SYLA’s vision was to create a series of outdoor areas for residents to enjoy daily encounters with nature,” said Yavanian in a statement.

Inside, residences, will feature sprawling windows, 11 ft. ceilings, custom oak flooring, in-unit washer and dryers, and marble bathroom tiling. A mix of studios, one, two and three- bedroom residences are set to be priced from $530,000 to $1.9 million. In all, 29 residences will feature private balconies or terraces.

Initial units went on sale at the end of January and will be gradually offered as the project reaches completion.

“Understated luxury is thoughtfully curated throughout — from the wellness-inspired amenities to the residence interiors,” said Paris Forino, who designed the interior and has also worked on the Gem Hotel, Galerie LIC, Missoni Baia and 610 Warren.“The subdued, natural palette invites the senses to feel at ease.”

In addition to ample green space, residents will also be able to decompress via several wellness-oriented amenities that include a fitness center with a yoga studio, a meditation room and an infrared sauna as well as a library with a fireplace, a private lounge with billiards table and screening area, a private dining room with catering kitchen, a children’s playroom, bike and stroller storage, private storage, pet spa and an auxiliary laundry room for oversized items.

While the building offers residents a robust stay-at-home package of recreation and functionality, part of the Arbor’s draw will be its surroundings, combining both Prospect Park and Greenwood.

In addition to the proximity of Prospect Park and Greenwood Cemetery, a 478-acre National Landmark, residents will be able to enjoy classic eateries like Luigi’s Pizza, which has been open since 1973, and Roots Cafe for coffee and live entertainment.

For Adam America, the completion of The Arbor will mark yet another notch in the developers’ belt for Brooklyn. Currently the company has 20 renovation and development projects ongoing.

Across Brooklyn, markets have enjoyed unprecedented growth and success, according to a recent report from brokerage and services firm, Douglas Elliman.  In the third quarter of 2018, Brooklyn saw a 7.2 percent increase in year-over-year average sale price, hitting $1.05 million — a record for the borough.

According to a fourth quarter report from 2018, however, condos fared a little less favorably last year with the median sales price declining by just under six percent year-over-year.

HAVE YOU HEARD: Folk star and horror chick buy Upper West Side condo