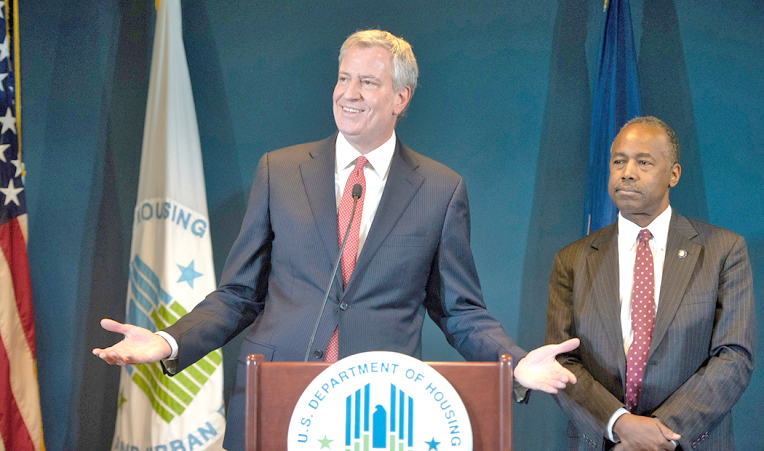 A recently released preliminary budget for New York’s 2020 fiscal year is catching criticism from politicians and business leaders who say it fails to adequately save funds for an impending economic downturn while substantially increasing spending.

“We understand that good economic times can’t last forever, and another period of downturn will inevitably come,” said Real Estate Board of New York, REBNY, President, John Banks.
“That’s why now is the time to pay close attention to the experts who are calling for smart budget prescriptions.”

According to an analysis from the New York Building Congress, who has praised the recent budget, the $9.8 billion in estimated capital project spending for the city’s this year’s fiscal year represents the highest total in seven years and presages an estimated $52.6 billion that the city says it plans to spend between 2020 and 2023.

Among the biggest features of the plan according to the NYBC is the funding of more than 40 bridge projects as well as the allocation of $5 billion to the Department of Education — the highest total to any one agency. Of the 1,389 projects planned last year, the city completed 1,109, marking a completion rate of 80 percent.

As the city’s targets spending increases, however, the prospects of a financial downturn which some analysts say looms in the near future, has shifted the attention of more fiscally conservative players towards bolstering the city’s savings.

“The City’s budget is a statement about our values, it’s our opportunity each year to consider how we are serving working families and promoting policies that will empower all New Yorkers. While there are some critical initiatives included in the FY 2020 budget, we must be doing more to reach a balanced, sustainable budget and ensure that city agencies are accountable for the public money they spend,” said Stringer in a statement.

“Our budget needs to be balanced for the long term, not just for the next year, so that we can ensure that vital initiatives and services for families and seniors go uninterrupted regardless of the broader economy. To reach that goal we need to build up our budget cushion and
conduct a more rigorous review of agency spending to root out inefficiencies and waste.”

According to an analysis by Stringer, while the city’s spending is set to increase at an annual rate of 2.3 percent between 2019 and 2023, revenue is projected to increase by 1.8 percent, resulting in a projected budget gap of between $2.9 to $3.5 throughout the next several years.

In order to prepare for what is expected to be an imminent slowdown in the economy, Stringer proposed savings of between 12 to 15 percent compared to the current 9.5 percent.

In the forecast, a statement outlined, is slowed job growth — projections foreshadow a near 40 percent reduction in the number of jobs created between 2020 and 2023 compared to post-recession levels and waning money from New York State which will been adversely impacted by a precipitous $2.3 billion drop in personal income tax revenue spurred by a sweeping tax cut passed by congress in 2017.

A chorus of voices in real estate and beyond has already begun to foreshadow a recession which may already be long overdue. Currently, the country is the second longest period of economic growth in its history — a course it has been on since the Great Recession in 2010.

Just when the recession may hit or what the catalyst might be, however, remains to be seen. Estimates project the downturn to come as soon as this year and as late as 2022.

Not all the feedback has been bad, however. In a statement, the NYBC praised Bill de Blasio for helping to bolster the city’s increasingly dysfunctional infrastructure.

“The long-term stability and growth of New York is contingent on good schools, safe and reliable transportation, and a basic state of good repair of the City’s infrastructure,” said Carlo Scissura, President & CEO of the New York Building Congress, NYBC. “Mayor [Bill] de Blasio and his administration’s latest capital plan is a timely and sensible step forward to ensuring our city’s prosperity in the coming decades.”

The NYBC has been one of the most vocal advocates for increased spending on city infrastructure which has struggled to update transit systems and keep pace with New York’s booming population.