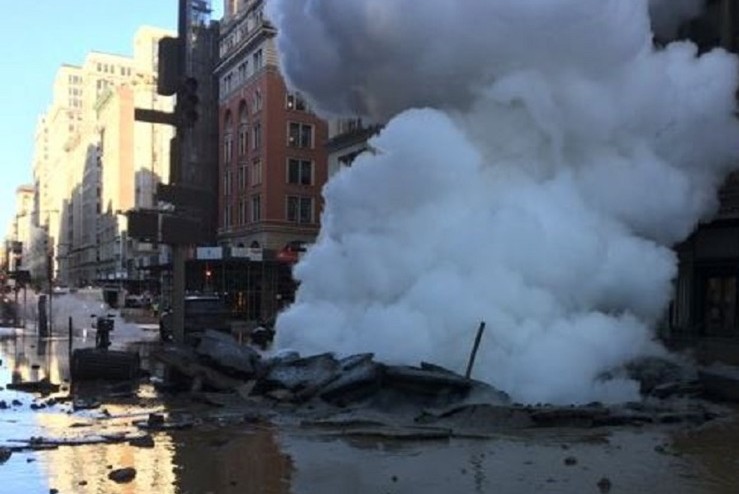 Steam blast has building owners in a stew

The steam pipe explosion that blew a crater into the middle of Fifth Avenue in the Flatiron District and spewed asbestos onto nearby buildings, cars and people, is still getting cleaned up a week later.

The early morning explosion last Thursday shut down several streets and a stretch of Fifth Avenue with many high-end retail stores.

No one was seriously injured in the incident, which is still being investigated by the ConEdison and the City.

“We’re not going to cut any corners, we’re going to be very thorough,” said Mayor Bill de Blasio at a press conference last Thursday, several hours after the explosion. “So, if a small business, if there’s any possibility that that material got in, we want to make sure it’s thoroughly clean.”

By Monday, the City announced that nine buildings had been cleared for re-occupancy by tenants, but a portion of Fifth Avenue between 19th and 22nd Streets was still closed to the public, while crews in hazmat suits cleaned debris and mud off the facades of buildings near the blast.

On Tuesday, the City announced that debris entered 12 buildings during the blast, and they would need to be cleaned before they could be functional again. Those include RFR’s 160 Fifth Avenue, Thor Equities’ 139 Fifth Avenue, Meringoff Properties 12 W 21st Street, Midtown Equities’ 141 Fifth Avenue, and Jeff Sutton and Maguire Capital Group’s 144 Fifth Avenue.

The stretch of Fifth Avenue impacted by the explosion is dotted with upscale retail, including Michael Kors, Kate Spade, Bandier, Club Monaco, and Cole Haan. All have been forced to close since the explosion last Thursday. And with many of the stores shut, it remains to be seen how the businesses will fare in an expensive retail corridor.

Million dollar apartment owners have also been forced out of their apartments at buildings like 131 Fifth Avenue, a co-op building where a penthouse apartment is currently on the market listed for $3.85 million, and 141 Fifth Avenue, where a recent two bedroom apartment sold for $4.65 million, while the City and ConEd cleans the buildings.

Ronald Zeccardi, president of Building Owners and Managers Association (BOMA) New York, said the organization had several calls with the NYC Office of Emergency Management and organization members last Friday and throughout the weekend and stayed in communication with members about the cleanup process.

“If they were directly impacted, we let them know the nuts and bolts of the operation—who they needed to contact and how, the location of the service center to get information directly from Con Edison and all involved agencies, and, to the degree possible, the time frame of the cleanup,” said Zeccardi in a statement to Real Estate Weekly.

Prior to the heavy rain Saturday afternoon, BOMA NY helped a member whose building was evacuated get permission to enter their building with a hazardous materials certified contractor to shore up the building, including sealing a hole in the roof where there was ongoing repair work happening at the time of the event.

“We continue to work with those overseeing the cleanup to make sure our members have the assistance and information that they need,” said Zeccardi.

Real estate attorney Adam Leitman Bailey said whichever agency is responsible for the steam pipe rupture could be liable for damages incurred as a result of the explosion.

“The first thing every business should be doing is putting in a claim to their insurance policy for any losses they’ve had for loss of business or if they closed,” said Bailey. In many cases, if the City is liable, they set up a fund to reimburse people for lost wages, items and other damages.

Bailey urged business owners in the area that were affected to look closely at their insurance policies and act fast. “You may have more coverage than you think, and it may pay for asbestos removal,” he said.

The cause of the explosion is still under investigation by the City and ConEd.

Owners, managers urged to adopt new technology to keep Legionnaires out of their buildings