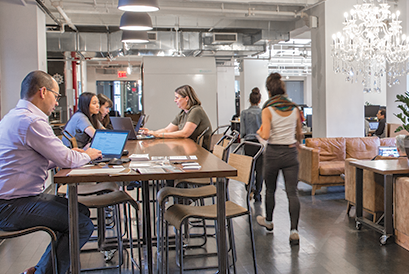 The company leased 43,000 s/f comprising two full and one partial floor at 156 Fifth Avenue in the Flatiron District, and 40,050 s/f on three entire floors at 105 Madison Avenue in NoMad, bringing its total number of locations to more than 40 in Manhattan, according to its website.

Elie Reiss of Skylight Leasing represented Knotel on both deals while the Ashtin Group represented the landlord, A&R Real Estate, at 105 Madison and the HRC Corporation represented itself at 156 Fifth.

While other companies in the burgeoning flex office market, such as WeWork, focus on providing shared office space to small companies and startups, Knotel aims to house established businesses in highly amenitized, turnkey spaces that offer malleable lease terms.

“Landlords view Knotel as the preferred alternative for agile office, and would rather work with us than gamble on co-working firms that are desperate to get out of co-working,” said Eugene Lee, Knotel’s global head of real estate and business.

“Owners prefer to avoid the friction and risk of dealing with them — even when they offer to overpay — which is why we are closing increasingly large, competitive deals in prime markets.”

Founded in 2015, Knotel now controls more than one million s/f of office space in New York, San Francisco and London.

In addition to the Manhattan locations, most of which are in Midtown, Midtown South and Midtown East, it also has one office apiece in Brooklyn and Long Island City.

Though it still only comprises 2.5 percent of Manhattan’s office market, flexible offices space has become the fastest growing segment in the city, according to “Beyond Coworking” a CBRE report on Manhattan’s flexible office market that was released this week. The market has grown from 1.3 million s/f in 2009 to more than nine million s/f today, with the bulk of that growth coming from 2013 on. As of last quarter, Knotel was the third largest flexible office space provider in the city with 570,000 s/f, according to the CBRE report. It has also grown the fastest, increasing its square footage by 3,271 percent since 2016,

WeWork was the far and away front runner with 4.1 million s/f, which is good for 45 percent market share. International Workplace Group, or IWG, was the runner-up with 1.52 million between its Regus and Spaces brands.

“Growth of the flexible space model continues, even as it evolves,” said Nicole LaRusso, Director of Research & Analysis, CBRE Tri-State.

“Twists and turns are inevitable, but what remains certain is that the industry will continue to grow throughout 2018 as companies of all sizes look to build greater flexibility into their real estate portfolios. Momentum is mounting for flexible space providers to expand their footprint in Manhattan and beyond.”