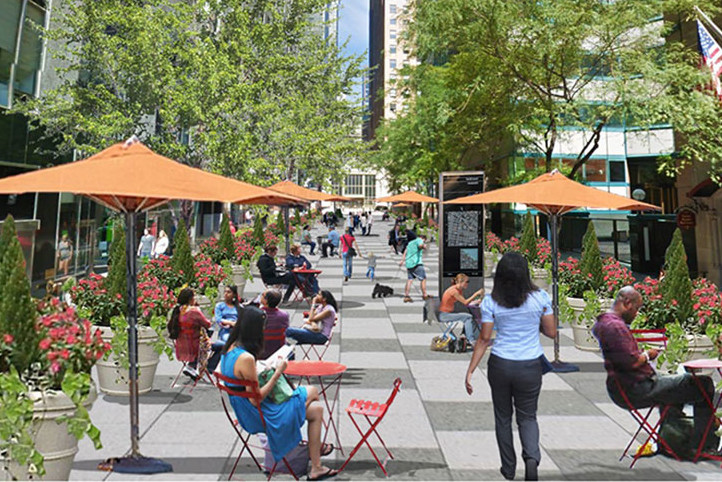 A city group has given the go-ahead for a new pedestrian plaza at Grand Central Station.

The new pedestrian plaza will be created at Pershing Square East between 41st and 42nd Streets with the shared street – accessible to some vehicles – on East 43rd Street between Lexington and 3rd Avenues. The project “will provide a transformed experience for pedestrians traveling to and from Grand Central Terminal,” said the Governing Group in a statement.

Both projects will be managed by the New York City Department of Transportation (DOT).

“The real-time improvement of transit and public space in East Midtown is underway,” said Alicia Glen, Deputy Mayor for Housing and Economic Development. “When riders and commuters at Grand Central get off the trains each morning, they’ll walk into wide open plazas with room to breathe. I congratulate the Governing Group for prioritizing the Pershing Square project, and we look forward to moving it ahead rapidly.”

“The East Midtown rezoning pioneered a new model for planning and funding public benefits to go with private development,” said Manhattan Borough President Gale A. Brewer. “Now, working together and incorporating input from the community, we’re beginning to deliver those benefits by starting the design and outreach process for a new Pershing Square pedestrian plaza and a newly redesigned, pedestrian- and bike-friendly 43rd Street. East Midtown will be more welcoming and will have more to offer New Yorkers, commuters, and visitors because of the work we’ve all done together.”

“East Midtown near Grand Central Station is the heart of Manhattan’s business and commerce, and the rezoning of this neighborhood last year made this vote possible,” said DOT Commissioner Polly Trottenberg. “In addition to maintaining New York’s status as an economic powerhouse, the new and vibrant public spaces will benefit all who work and visit East Midtown. The unanimous vote allows for the complete build-out of a 43rd Street ‘shared street’ as well as the formal transformation of Pershing Square East into a pedestrian plaza. We will be easing pedestrian congestion in this incredibly busy neighborhood while at the same time creating welcoming outdoor public spaces for thousands of people every day.”

The vote comes after the 13-member Governing Group elected directors, approved a mission statement and reviewed the public realm improvements to which the City committed upfront funds at the time the zoning was adopted last year.