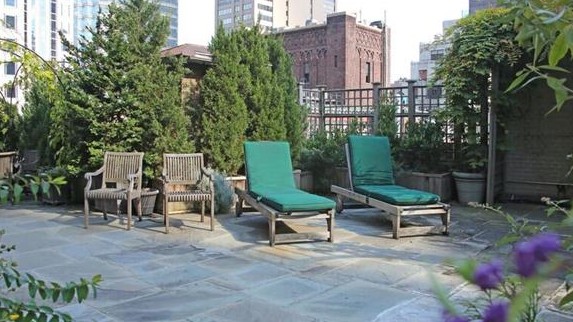 William Randolph Hearst built the hotel in the 1920s for his mistress and silent film star Marion Davies. Over the years. it has been home to icons including Bette Davis, Elizabeth Taylor and Richard Rodgers.
Apartment #1900 is a 3,000 s/f apartment originally created by a combination of four apartments.
It has a 1,400 s/f wraparound terrace, living room with a beamed ceiling and built-in bookcases, and a master bedroom woth dressing room and custom wall of closets. Two private elevators open directly into the foyer.
The penthouse is listed for $4.995 million with Carole Armstrong of DJK Residential.

ACTRESS and director Meg Ryan, beloved for her NYC-centric roles in When Harry Met Sally and You’ve Got Mail, just put her SoHo loft on the market with Corcoran for $10.9 million. The home has quite a celebrity caché. Ryan bought it from Simpson’s star Hank Azaria in 2014 for $8 million. Before that, the loft was owned by artist Cindy Sherman.
A true SoHo loft, the property was originally built in 1888 as a button factory. Ryan enlisted architect Joel Barkley and designer Monique Gibson to complete the property, which was featured on the cover of Architectural Digest in October.
The full floor, 4,100 s/f apartment is full of oversized windows and original columns and has a 40-foot gallery. There are three bedrooms and three baths, an eat-in kitchen, media room, butler’s pantry, and laundry room.
The property is listed with Barbara Hochhauser of Corcoran.

***
WRITER Andrew Ross Sorkin has sold his Upper West Side apartment for $3.25 million.
The three bedroom, 3-bath apartment on the fourth floor of 118 West 79th Street has 10 ft. ceilings, formal entry and dining room.
Sorkin created the Showtime series Billions and wrote Too Big to Fail.