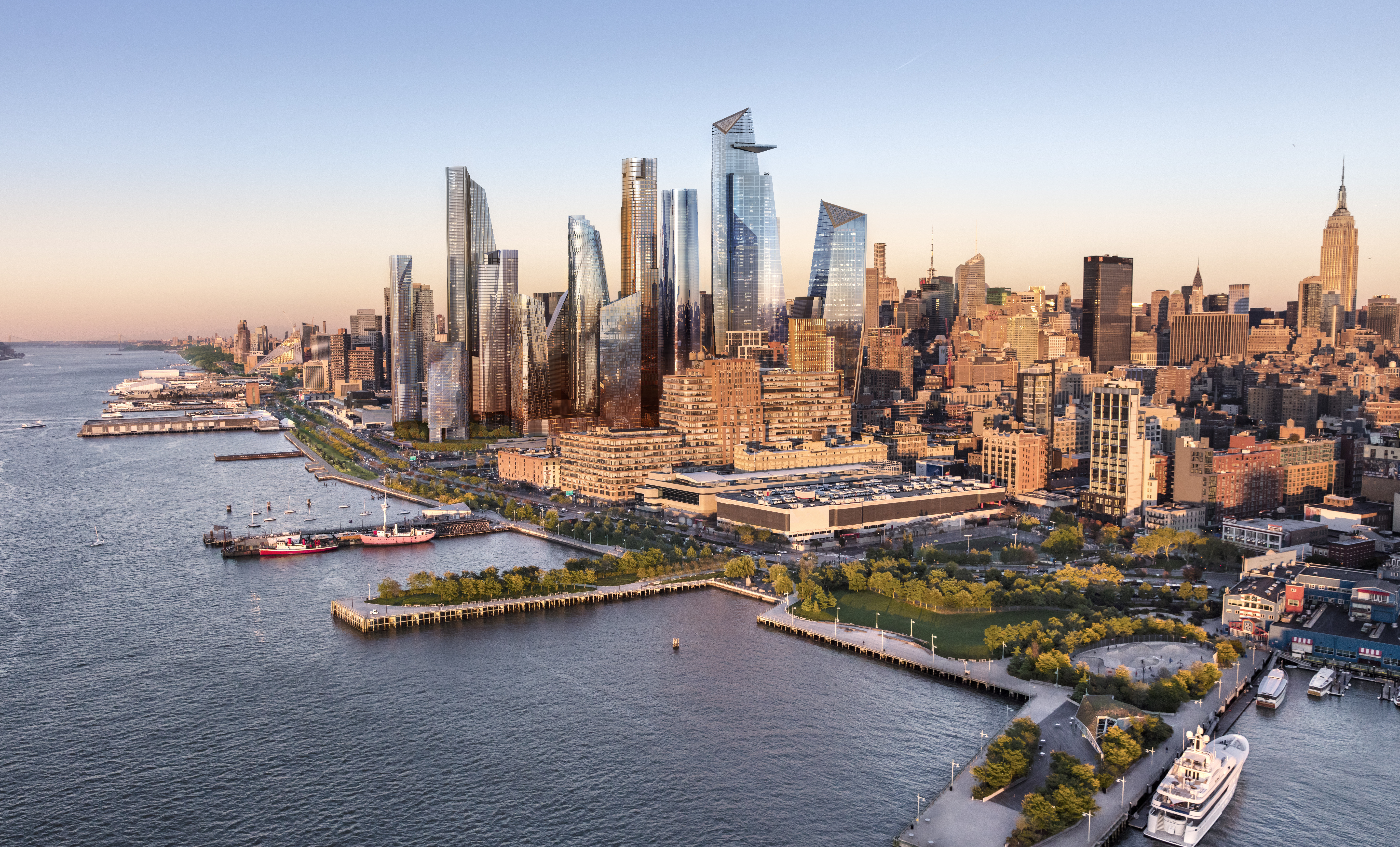 What tomorrow will look like on Manhattan’s new west side

The first apartments in the newest neighborhood built in New York City just went on sale.

And if early indications are anything to go by, the developers wonʼt be short on residents eager to live in the 28-acre, $20 billion Hudson Yards that is giving the city a new skyline.

“There has been a tremendous interest in the residences at 15 Hudson Yards. There were more than 7,000 inquiries before sales launched just two weeks ago,” Corcoran CEO Pam Liebman told Brokers Weekly last month.

Corcoran Sunshine along with Related Sales are handling sales at 15 Hudson Yards, the first apartment tower to rise in Hudson Yards, which is being developed jointly by Related Companies and Oxford.

One of the biggest developments in New York City history, the Far West Side complex will ultimately include 15 skyscrapers serving office, residential, and retail demand.

A total of 4,000 apartments are expected to be built at the site, from studios to sprawling penthouses, and some of the first prices to be listed start at over $2 million.

City officials and developers have been touting the area’s development for years, and when the 7 train was finally extended to 11th Avenue with the opening of the Hudson Yards subway station in September of last year, it was a sign that the long-planned neighborhood was finally coming to fruition.

The office buildings have gotten a lot of attention for the big name companies that will be occupying them — Coach, L’Oreal, HBO, and Time Warner among them — and Related’s dramatic public art piece “Vessel” was unveiled to much fanfare. Now the residential component of the project is getting its share of attention.

The 285-unit residential tower will boast amenities like a 75-foot indoor swimming pool, a 3,500 s/f fitness center, a sound-proof screening and performance room, two private dining rooms, and even a golf lounge with a simulator. The building will also boast a rooftop lounge that will have a fireplace and seating areas.

At a panel discussion on the new neighborhood last week, developer Joe Moinian of The Moinian Group, Sabrina Kanner of Brookfield, Ken Himmel of Related Urban, and Shawn Kildare of the MTA talked about attracting office tenants, infrastructure, and how the complex will draw visitors and residents alike.

Just three weekʼs into the sales launch, Kimmel was upbeat about interest in 15 Hudson Yards. An official spokeswoman for Related later told Broker’s Weekly that the developer is not releasing sales numbers just yet.

“15 Hudson Yards is a wholly unique condominium offering that cannot be compared to anything else on the market today in New York City. After only a few weeks on the market, it’s too soon to announce a specific number of signed contracts, but we are experiencing strong interest and are confident that 15 Hudson Yards will be one of the most successful new developments of 2016,” said the spokeswoman.

Related’s mixed use 35 Hudson Yards is also under construction. A 72-story tower with more than one million s/f of space, it is located at the corner of 11th Avenue and West 33rd Street.

The 1,009 ft. tall tower will have retail space on the ground floor as well as the second, fourth, and fifth floors, followed by office space on the eighth through 13th floors, a 217-key Equinox hotel on the 15th through 29th floors, and 137 condo units on the 31st through 70th floors.

Around the primary Related/Oxford Hudson Yards, other buildings are also beginning to rise.

Imperial Companies has topped out its 30-story rental on West 38th Street. It will have 225 units available when it opens.

And the Chetrit Group’s hotel-residential building on West 37th Street will be across the street from the Javits Center and house 358 hotel rooms on the lower floors, with 131 apartments on the upper floors.

Extell is also building a 56-story tower at 555 10th Avenue in the district that will contain 478 market rate rentals and 120 affordable apartments. The building will boast 30,000 s/f of amenities for its residents, including a rooftop pool, a pet spa and dog park, and a bike service station.

There has been no shortage of interest and anticipation of Hudson Yards, which has the unique claim as a neighborhood built almost entirely from scratch, but within Manhattan. However, it remains to be seen who will live there and where they will come from.

Caroline Bass is a broker with Citi Habitats, and she recently participated in a tour of Hudson Yards.

“People are very interested, I think it’s a big buzzword around people and they don’t know exactly what’s going on out there,” she said.

One of Bass’s clients expressed interest in Hudson Yards, but found that the starting sales prices were out of her reach.
“It’s not necessarily a price point that most buyers are going to get into, but there’s a lot of interest and intrigue. Whether or not they can afford it, they are interested.”

Bass said that during the tour, they were told that Related’s next residential building at Hudson Yards may have prices hit $4,000 p/s/f.

Hudson Yards’ official website calls Hudson Yards an “affluent, fashion-minded neighborhood” that is surrounded by an area with “400,000 residents who are well paid and well educated.”

There will be plentiful shopping and green space available to future residents. plans include around 750,000 s/f of retail, with more possible. The tenants that have already signed on include department store Neiman Marcus.

In terms of green space, the project is slated to have 14 acres of public open space, including three parks. The complex, built on platforms above rail yards, also connects to the High Line Park.

Bass said she was impressed by the convenient subway access and the high quality restaurants, including a new concept by Thomas Keller, of Per Se fame.

She compared the forthcoming retail at Hudson Yards to the Time Warner Center at Columbus Circle.

“This is significantly bigger than Time Warner, so I just envision that if it’s similar to that and new and bigger, it’s going to be a huge draw for people,” said Bass.