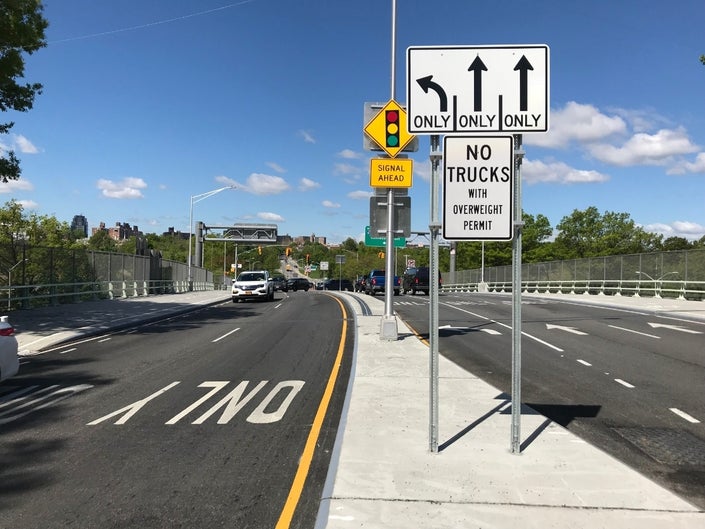 Governor Andrew M. Cuomo announced that major construction is complete on a $13 million project to rehabilitate the Jewel Avenue Bridge over the Van Wyck Expressway in Queens, as well as the exit and entrance ramps that connect Jewel Avenue to the southbound expressway.

The project has enhanced safety and mobility along the thoroughfare in Central Queens and improved access to one of the borough’s major traffic arteries.

“New York State is investing in infrastructure like never before, and the completion of this project is proof positive that we are committed to investing in the safety and efficiency of our roads and bridges,” Governor Cuomo said.

The project included the repair of the bridge deck and structural steel, the repaving of the bridge’s road surface and the reconstruction of its sidewalks. Structural repairs were also made to the exit and entrance ramps leading to and from Jewel Avenue to the southbound Van Wyck.

Additional improvements include new LED streetlights, traffic lights, drainage scuppers and fencing. Signage along the roadway was upgraded to meet current standards and provide better reflectivity and readability. The bridge serves as a connector between the Forest Hills neighborhood on the west side of the Grand Central Parkway and the Kew Gardens Hills neighborhood to the east of the Van Wyck Expressway. It’s also part of the routes of the Q4/Q44 express buses and the Q64 local bus.

The project included the repair of three retaining walls along the eastbound Long Island Expressway: between 58th Street and Maurice Avenue; between Junction Boulevard and 97th Place; and at the exit ramp at 138th Street. Signage and roadway striping were also added along Meadow Lake Drive in Queens.