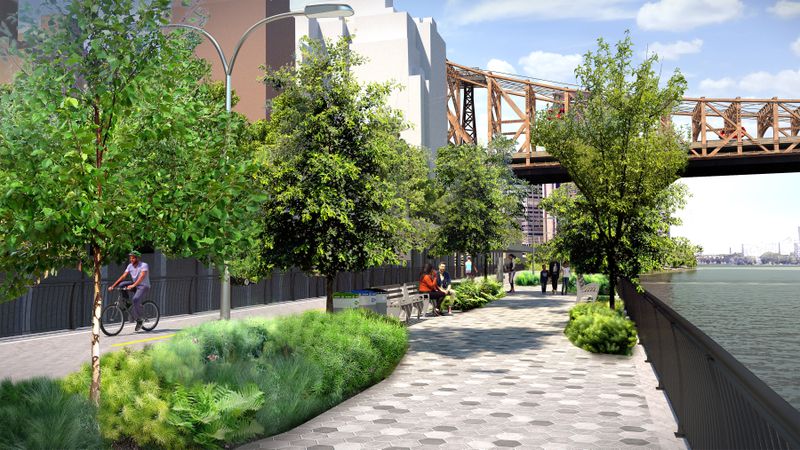 The project, which will stretch from East 53rd to 61st Streets, is part of the Manhattan Waterfront Greenway initiative to create accessible waterfront public space and safe bicycle pathways along the entire perimeter of Manhattan.

“Today marks another major step forward in returning the waterfront of New York City to New Yorkers,” said Mayor Bill de Blasio. “I look forward to the day when families and friends can relax and enjoy the East Midtown Greenway — an oasis in the heart of our city.”

“Piece by piece, we are closing the biggest gaps in the East River Greenway, bringing us closer to the goal of providing cyclists with an uninterrupted protected bike path around Manhattan,” said NYC DOT Commissioner Polly Trottenberg.

“We thank Mayor de Blasio and our partners at EDC and NYCParks for their work on this project, which not only helps the Administration meet its Green Wave goals, but gives the East Side the kind of bike connectivity and public space that residents and visitors have long enjoyed along the Hudson River Greenway, the nation’s busiest bike path.”

The EMG will address the historic lack of connection to the waterfront for East Midtown communities by creating a continuous 40-foot-wide esplanade over the water parallel to FDR Drive, allowing pedestrians and cyclists to experience water on both sides.

The approximately $100 million project, which will create roughly 1.5 acres of new waterfront park space, is expected to be completed by 2022. Once open, NYC Parks will maintain the EMG.

As part of the EMG project, renovations and an extension will be carried out to Andrew Haswell Green Park, which borders the greenway to the north, including a new ADA-accessible pedestrian bridge.

Additionally, the project will include a widened area near 53rd Street with space for environmental programming and an art installation created by Stacy Levy that was selected through a public procurement process in 2018.

The EMG will be the first major waterfront gap in Manhattan filled since the opening of the Riverwalk in Riverside Park in 2010.

In 2018, Mayor de Blasio announced that the City would invest a total of $250 million to begin closing the remaining gaps in 32 miles of Manhattan waterfront esplanade, starting with stretches in Inwood, Harlem, East Harlem, and Midtown Manhattan.

This strategy will connect communities to their waterfront and add about 15 acres of quality open space, while integrating the Greenway into surrounding neighborhoods.

Stantec is providing landscape architecture and waterfront, civil, structural, and electrical engineering for the project. Skanska is serving as construction manager.